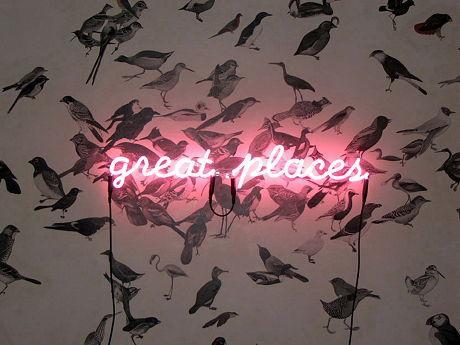 A contemporary artist at home

RUHR  In 1986, Belgian curator Jan Voet organized an exhibition in Ghent that would create precedence. With the title «Guest rooms», he installed works by contemporary artists in the homes of well-known citizens, and managed to have them open up their homes to the visitors. Twenty-five years later, the international biennale of light art, to be held from 28 March to 27 May 2010 as one of the events celebrating Ruhr European culture capital, renews this experience. The creators, among them some international stars such as Olafur Eliasson, James Turrell and Angela Bullock, have invited themselves to the homes of ordinary citizens to mount their installations. The neon lights in the bathroom are going to look rather ancient! As contemporary art is often perceived by the public at large as being too distant and institutional for them, this currently developing approach is an original way of making it more accessible.

MADRID - He is related, artistically, to Unica Zürn and Adolf Wölfli. The work of Martín Ramírez (1895-1963) can be classified in the art brut category, or outsider art, or more brutally- as «art of the mad» which Hans Prinzhorn had studied The Mexican artist, suffering from schizophrenia and wishing to flee his country ravaged by the civil war and an economic crisis tried his luck in the California railways. He was unemployed and homeless, in a country where he did not speak the language, and was interned in 1931. A self-taught artist, he produced his own colors by melting tubes in his pot, and his paper by assembling bits of paper glued with raw potatoes and saliva. Fearing a contagion from his tuberculosis, his drawings were thrown in the trash  Until a psychiatrist in the early fifties saw an artistic dimension in them. Of his nearly 500 drawings, sixty of them are shown in this first European exhibition of Ramírezs work. He never signed his works, which somewhat complicates things for a catalogue to be put together, but his obsessive themes are recurrent: stags and riders, tunnels, geometric landscapes.
Martin Ramírez. Marcos de reclusión at the museo Reina Sofía, from 30 March to 12 July 2010.

PARIS  We would choose to see Lao Tseu, the tutelary figure who presumably lived during the VIth century B.C., as a divinity. But he was rather a figure that awakened consciences, a guide on the path to justice and wisdom. Taoism, one of the pillars of Chinese civilization next to Buddhism and Confucianism, is a philosophy that represents to the Western world all the attraction of mystery and esotericism, symbolized by the concepts of the yin and the yang. The exhibition at the Grand Palais, relying on the collections from the Guimet museum and some foreign museums among which the one from Taiwan, tries to decrypt it through the filter of art. Paintings on silk, celadon porcelain, limestone sarcophagus, bronze sculptures, manuscripts  in total, nearly 250 pieces that survived numerous persecutions and rampages  show how that level of harmony with the cosmos can be reached. The Réunion des musées nationaux takes the opportunity of this spiritual fervor to organize its first «environmentally-responsible» exhibition with re-usable, aluminum supports, paints without solvents and light consumption divided by twenty through LED lighting.
La voie du Tao, lautre chemin de lêtre at the Grand Palais, from 31 March to 5 July 2010. Catalogue Rmn, 45 .

REIMS  A Parisian Japanese, Foujita was friends with all the bohemian artists of the Roaring Twenties, from Modigliani to Picasso. Once he went back to his country in 1933, he started a second career as an almost official war painter. But he was terribly marked by its atrocities, came back to France and converted to Catholicism in Reims in 1959, taking the name of Leonard in tribute to Leonardo da Vinci. His new faith pushed him to build and decorate a chapel, that of Notre-Dame-de-la-Paix, where he would be buried. His widow, who died in 2009, 41 years after him, donated three of her husbands works to the city of Reims The three examples of Virgin of Renaissance inspiration, that justify his nickname as the Japanese Fra Angelico, are the basis of the exhibition. The latter presents in particular four large white paintings from the end of the twenties (of which les Lutteurs), recently restored, that mark his turn towards a more monumental type of painting, inspired by Diego Rivera, and the large triptych of the Apocalypse, on the horrors of war.
Foujita monumental. Enfer et paradis at the musée des Beaux-Arts, from 1st April to 8 June 2010. Catalogue Hazan, 30 .

The Adivasi, indigenous populations from India, persecuted and classified among the lowest casts, are finally paid tribute to: the musée du quai Branly studies their rich cultural heritage  music, dance as well as painting and sculpture. From 30 March to 18 July 2010.

The Kunstmuseum in Coire (Chur), in the Grisons region in Switzerland, dedicates a retrospective to Giovanni Giacometti. The father of the very famous Alberto was a renowned painter in the beginning of the XXth century. A freind of Segantinis and Cuno Amiets, he was a great colorist with a passion for Swiss nature. From 27 March to 24 May 2010s.

While Josephines letters just sold for huge sums at the Osenat auction house on 27 March, the castle of Compiègne, under the explicit title La politique et lamour(Politics and love) celebrates the relations between Napoleon and his second wife, Marie-Louise. From 28 March to 19 July 2010.

PARIS - This auction covers practically a century of French and European decorative art, and offers lots at very accessible prices, starting with a few hundred Euros: lamps and small furniture, or in the Art nouveau glass section, next to the irreplaceable pieces by Daum and Gallé, vases and bowls by lesser known artists such as Georges Despret, Gabriel Argy-Rousseau, Albert-Louis Dammouse. As the differences in style are sometimes very subtle, the sale is introduced by symbolist paintings by Alphonse Osbert and Georges de Feure and Hungarian ceramics by Zoslnay. Some beautiful pieces of Art deco are remarkable, such as the appliques by Rateau that belonged to Charles Jourdan. The prices soar as can be expected to nearly 100 000 , just to confirm if need be- that Art Déco continues to be privileged in regard to Art Nouveau.
Art nouveau, Art déco on 2 April 2010 at Richelieu-Drouot (Millon & Associés)

His father is a lexicologist who wrote a famous dictionary on difficulties. Jean-Jacques Dournon (born in 1953) also wrote his vocabulary, but prefers to do so with charcoal. An outstanding drawer, he sees nature in everything, from the cliffs in Brittany to the landscapes of the Mekong, as well as by scratching beyond the surface of things. In the Transi by Ligier Richier for example, the remarkable sculpture of the Renaissance that represents the cadavre of René de Chalon (shown at the church of Saint-Etienne in Bar-le-Duc), he sees fish, stones, flowers. Dournon is a friend of the poet Guillevic and of the couple formed by painters Arpad Szenes and Vieira da Silva, and has like them that capacity to transfigure reality. A discreet creator who gives preference to long residences (as his recent one in Korea) to the hustle and bustle of contemporary art fairs, he traces his path like a drawing in the black sand.
Jean-Jacques Dournon is exhibited at the musée eucharistique in Hiéron (71600 Paray-le-Monial) from 20 March to 31 December 2010.

Sports in the museums

The initiative is transversal and interesting. The curators of public museums in the Ile-de-France region answered a questionnaire: what works do their institutions have on the theme of sports? The answer fills 180 pages and we can well imagine it is fragmented. Everyone played along, from the Louvre to the municipal museum in Colombes, including the Toy museum in Poissy and of course the national museum of Sports (musée national du sport). The works cover a wide range, from antique statues (wrestlers from the Louvre or the discus thrower from the Petit-Palais) up to the rugby T-shirt offered to Mac Orlan in 1967, and the subject is very stimulating since it touches on debatable questions such as sports and women, sports and race, etc. In looking at random we see the boules from Lyons, Stéphane Mallarmés racket, the silk number worn by Mimoun at the moment of his victory in the marathon of the Melbourne Olympics in 1956, a compression by César, illustrations by Daumier and beautiful portraits by Bernard Boutet de Monvel (who died in the same airplane accident as Marcel Cerdan). One single regret: after looking at this wonderful book the reader is dying to visit the museums; but the addresses of the museums are not given!
Sport ! Quand les musées font équipe, a collective work, Somogy, 2009, 184 p., 29,50 

LONDON  A 120-metre high spiralling tower, named ArcelorMittalOrbit, designed by artist Anish Kapoor, has been chosen on 31 March 2010 as the symbol of the 2012 Olympics.

Read the article on the BBC

LONDON  Architect Jean Nouvel has been chosen to draw the 10th temporary pavilion of the Serpentine Gallery, in Hyde Park. This red metal structure will be visible from 5 July to 20 October 2010.

LOS ANGELES  The Pritzker prize, the most famous architecture award, was attributed on 29 March 2010 to the Japanese firm Sanaa, to which we owe in particular the New Museum in New York and the Louvre Lens (under construction).

MADRID  The Prado museum inaugurated on 25 March 2010 its new rooms dedicated to Spanish painting from the Middle Ages to the Renaissance.

PARIS  The ceiling commissioned by the Louvre museum to artist Cy Twombly for the room of the Bronzes, has been open to the public since 25 March 2010.

PARIS  The first COAL prize, awarded to an artistic work dealing with sustainable development, was given on 31 March 2010 to Thierry Boutonnier for his project of an ecological approach to Greater Lyon Eastern entrance.