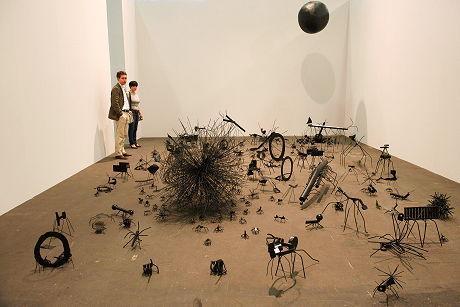 The call from Basel

BASEL  If Basel survives, confidence will return. If Basel fails, fear rises. The famous Swiss fair is more than ever this year the barometer of the art market. When a secondary art fair goes up or down it is considered an epiphenomena. It is not at all the case for Basel, the professions standard metre, while the only real difficulty resides in measuring the real volume of transactions carried out: many will only unreel much later. The market is an entity that is much harder to seize than one generally imagines  For this number 41 edition, the number of galleries is close to 300. The two sections called Art Statements to discover new talents  and Art Unlimited  for the pleasure of seeing installations that at times are out of proportion  will once again be the most visited. There will be fewer Chinese artists than usual and a comeback of certain confirmed artists  Dan Flavin, Mario Merz, Yayoi Kusama, Doug Aitken, Michelangelo Pistoletto or Sigmar Polke, whose Laterna Magica will be a sort of homage to his career (the German artist died last week).
 Art Basel, du 16 au 20 juin 2010.

Caen, proud of its stone

CAEN  It was used to build the churches in the English countryside and the Tower of London, as well the far-away cathedrals of the Bermudas. The stone of Caen was formed 165 million years ago and is one of the great ladies of European architecture. As a souvenir of its exploitation there are 80 hectares of quarries under the town in Normandy. The musée de Normandie presents the success of this material, greatly due to the conquest of England by William, and its important trade up to the beginning of the XXth century. While most of the deposits are now closed, thus marking the end of a centuries-old saga, the one of Cintheaux still supplies the companies specialized in the restoration of historical monuments with some very beautiful limestone.
Pierre de Caen, des dinosaures aux cathédrales at the musée de Normandie, from 9 June to 31 October 2010.

PARIS -Equatorial forests as far as the eye can see, vast savannahs, a 4 million km2 basin, a river that is up to 30 kilometres large: these figures prove the Congo River is among the giants. It bathes many countries and cultures  from Gabon to Angola, from Cameroun to Congo-Brazzaville, and is the homeland of those «black» sculptures which so fascinated European artists at the beginning of the XXth century, from Picasso to Dix. The people who inhabit it are very diverse but united by the link of Bantu languages. They have created an art in which we can detect lines of shred strength: heart-shaped masks, the feminine figure, the founding ancestor. The exhibition brings together 170 Fang, Punu or Kota objects, and unveils for us strange relics of men who died violently, next to touching maternities.
Fleuve Congo, arts dAfrique centrale at the musée du quai Branly, from 22 June to 3 October 2010. Fonds Mercator catalogue

PARIS  He is the embodiment of the billboard artist, the author of posters that made the history of the Folies-Bergère or the Opéra de Paris. Jules Chéret (1836-1932) though cannot be reduced to this sole activity: he was also a talented painter and an admirer of large settings, as can be seen in the retrospective the musée des Arts décoratifs dedicates to him. It is the first time in Paris since 1912 - and then he was still alive - to celebrate the «Watteau of crossroads». He was the designer of the Rimmel perfumes labels, a business man (he had a printing press) and a cosmopolitan (he lived in London). And he was very prolific since he lived a long life (he was almost one hundred years old when he died). Chéret dabbled in many fields, all shown in a setting that resembles the gaily colored Morris walls and columns from the Belle Epoque.
Jules Chéret at the Arts décoratifs from 23 June to 7 November 2010

The musée Malraux du Havre confronts its Degas collection from the Senn-Fould Donation with 15 pastels from the musée dOrsay that belonged to the same family of collectors. From 19 June to 19 September 2010.

The Whitechapel Gallery in London is reviewing the contemporary art collection of Greek magnate D. Daskalopoulos, in various parts. The first, Corporeal is dedicated to the human body. Until 10 September 2010.

. The collaboration between the Musée d'art moderne de la ville de Paris and the Palais de Tokyo has given birth to an exhibition, Dynasty, representing 40 contemporary artists.From 10 June to 29 August 2010.

PARIS  Similar to swallows, it is back every year at the end of the spring. We are not talking about migrants but rather the sale of Oriental art by the Gros et Delettrez practice. It spans over two full days to be able to sell a significant mass of works (698 lots). Like other years, we will study the estimates and prices in progress and we will measure the enthusiasm of the buyers from the Gulf region, to evaluate the state of the market. We note a great quantity of lots at low prices  even watercolors by Edy-Legrand, a star two years ago, can be negotiated for less than 1000 . The same can be said for Etienne Dinet, who had gone over the one million mark. This year we will only see a run-of-the-mill sunset (approximately 30 000 ). Jacques Majorelle will undoubtedly get the lions share, with two paintings from the 1930s, his most fertile period, that should go for 300 000  (for the Aouache à Aneiter) or 200 000  (for the Femmes noires récoltant des dattes -Black women gathering dates-). We will keep an eye on less confirmed talents such as Edwin Lord Weeks (Belle Orientale endormie) or the colorful paintings by Roger Bezombes that could easily surpass their estimates (40 000  for Les offrandes du Maure à la promise - The Moores offerings to his beloved-).
Tableaux orientalistes at Drouot-Richelieu on 20 and 21 June 2010 (SVV Gros-Delettrez).

When Pierre Buraglio was a little boy

He militated for Vietnam, had a weakness for the cultural symbol the Gauloises cigarettes represented who smokes them today in this era of blond dictatorship? and created works for oratories and churches. In short, Pierre Buraglio does not fit into over-standardized classifications. Here we run into him again, hardly seventy years old, and already looking back at his childhood during the war, to the rhythm of the explosions of V2, the roundups, the rations and the absence of men. Were these real memories or interpreted in the light of the years and commitments? The answer to this question is not very important since the role of artists is precisely to put some distance between reality and themselves  This personal diary  these manually enhanced prints was started in 2004 and has words and images clash into one another.
Pierre Buraglio is presented at the galerie Catherine Putman (40 rue Quincampoix, 75004), until 24 July 2010.

The roads to Abstraction

The key word for abstract movements is to shy away from the cult of resemblance. But, from Cubism to OpArt, they cover realities that greatly differ from one another. This little manual can be used as a support in face of the abundant production that has surpassed Figurative art over the last century. Numerous «isms» appear in this setting Dadaism, Neo-Plasticism, Rayonism, Orphism  which the novice can interpret as minimal variations on one same melody. The book focuses consecutively on Kandinsky, Braque, Malevitch, Pevsner and Pollock, and reserves boxes for more specialized themes such as the Brancusi trial in the USA in 1926: was the Oiseau dans lespace (Bird in Space) imported by photographer Edward Steichen a useful object submitted to customs duties or is it a work of art, exempted of the any tax? The verdict was a sort of official recognition of abstract art  It is a shame the itinerary stopped at Carl Andrés Minimalism, since the adventure is still going on today!
Lart abstrait by Laure-Caroline Semmer, Larousse, 2010, 168 p., 23 

BIGNAN (Brittany)  Following the decision by the general council of Morbihan to stop all financing, the Centre dart contemporain of Kerguéhennec, that opened in 1986, is threatened with being closed.

MONACO  The first element of the New National Museum of Monaco, Villa Sauber, opened on 8 June 2010 with an exhibition by Yinka Shonibare.

PARIS  The regional heritage day (La journée du patrimoine de pays) will allow the public to access mills and other examples of old buildings ancient on 20 June 2010 throughout France.

SANTA FE  The Site contemporary art biennale will open on 20 June and will remain open until 2 January 2001, under the title «The Dissolve».

Leon Werth, a stroller through art

ISSOUDUN - Léon Werth (1878-1955) was a polymorphous writer, a friend of Saint-Exupéry -who dedicated his le Petit Prince to him - and he built strong links with the artistic world of his time. The exhibition at the musée de l'Hospice Saint-Roch, organized together with the Viviane Hamy publishing house, allows us to gauge the scope of his interests, from Monet to Matisse.