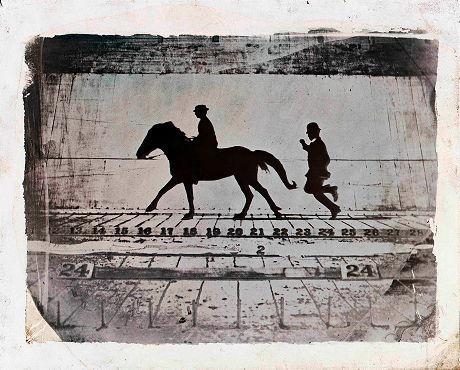 Eadward Muybridge, Leland Stanford, Jr. on his Pony Gypsy  Phases of a Stride by a Pony While Cantering, 1879, Wilson Centre for Photography. Courtesy Tate Britain.

Monet and Gauguin open the season in force

The superstar exhibition of the new season will certainly be the one of Monet at the Grand Palais (22 September). A blockbuster, as they say, that could rival or break the attendance record set by Picasso (over 780 000 visitors). On the other side of the Channel, another large persona will compete with Monet: Gauguin, no less, at the Tate Modern (30 September). Photography attracts an increasingly large public and we will witness a new dual between Paris and London with Eadward Muybridge at the Tate Britain (on 8 September) against Kertész at the Jeu de paume (28 September). In ancient art, we are very curious about Cranach (at Bozar, Brussels, 20 October) and, closer to our days, by Gérôme at the musée d'Orsay (18 October), De Nittis at the Petit Palais (21 October) and Arman at the Centre Pompidou (22 September). As for the civilizations, we are invited to span from the Incas (at the Pinacothèque de Paris, 10 September) to Vienna 1900 (26 September at the fondation Beyeler, in Basel), from the treasure of the Médicis (musée Maillol, 29 September) to France in the 1500s (at the Grand Palais, 6 October). Among the other curiosities, Baba Bling, a plunge into the external signs of wealth in Singapore (at quai Branly, 5 October), is undoubtedly the most exotic offer.

LAST DAYS! UNTIL SEPTEMBER 12, DO NOT MISS... ROBOT DREAMS, when the artist interacts with Artificial Intelligence at the TINGUELY MUSEUM in BASEL. Read Art-of-the-Day article

LONDON  He was 9 years old when photography was invented. A few decades later, Eadward Muybridge (1830-1904) would himself enter the art forms history with his images on movement, breaking down mans walk or a horses pace in successive snapshots. He was the first to demonstrate what so many before him had never succeeded in doing, that at one given moment a horse has all four hoofs up in the air. The exhibition at the Tate Britain gives a large place to this aspect, but does not omit the rest, that is that Muybridge also photographed landscapes in the USA and in Guatemala, followed wars and the building of railways. He is often looked upon as a technician, but Muybridge had a dark, Romanesque side to him as well. In 1874, in San Francisco, he murdered his wifes lover and placed his son in an orphanage
 Eadward Muybridge at the Tate Britain from 8 September 2010 to 16 January 2011.

All the Inca gold

PARIS  The greed of the conquistadors left very few traces of the extraordinary virtuosity of the Inca gold jewellers: the essential part of the loot taken by the Spaniards  including the colossal ransom given by Atahualpa in pure loss in 1533  was melted. But enough is left to measure the symbolic importance of the metal which at no moment was used by the Peruvians as a currency. On the other hand, the nearly 300 objects brought together by the Pinacothèque demonstrate how it personified the sun and the emperor. Funerary objects, crowns, jewels, ceremony vases, including the warriors coccyx protectors and the spatula to mix the lime and the coca prove the omnipresence of the beautiful metal (the Great Inca even had a garden in which all vegetables were reproduced in gold), which dazzled the Europeans. This precious group, gathered from the major Peruvian museums, goes beyond the Incas since it includes the great cultures that preceded them, Chavín, Huari, Mochica or even Paracas.
 LOr des Incas, origines et mystères at the Pinacothèque from 10 September 2010 to 6 February 2011.

VENICE  We all know Barry Lindon or 2001, Space Odyssey . Not all of us know though that Stanley Kubrick started his career as a photographer. Armed with a camera given by his father, he started as a teenager and was then hired by Look magazine after WW II, when he was just 17 years old. He wrote his first scripts, building his reports as complete stories, whether he focused on student life at Columbia University in New York, on the day of a young shoe shiner in Brooklyn, or the tracking down of petty criminals and their transportation in the contemporary Paddy Wagon. The exhibition presents over two hundred images, among the 20 000 held by the Museum of the City in New York and the Library of Congress in Washington, a patrimony that has not yet been dully studied.
 Kubrick fotografo at the Istituto Veneto di Scienze, Lettere ed Arti until 14 November 2010.

 The private museum of Herakleidon, in Athens, presents some one hundred drawings from Greek collections on the theme of the Woman-muse 1900-1950. From 3 September to 21 November 2010.

 In Paris, the Fondation Cartier-Bresson will host the work of American photographer Harry Callahan (1912-1999). From 7 September to 19 December 2010.

An abundance of events

As every year before, there are many collective events on the calendar. In Europe, the commercial contemporary art fairs will begin seriously in October (Frieze in London on the 14th, the FIAC in Paris on the 21st) but Asia starts even earlier (SH Contemporary in Shanghai opens on the 9th). While the Biennale des antiquaires will be inaugurated in Paris on 15 September, the non-commercial fairs have already been launched: the one of Venice, dedicated to architecture (since 30 August, until 21 November), the one of Gwangju, in South Korea, (contemporary art, since 3 September, until 7 November). They will be closely followed by the one in Busan (in South Korea as well, 11 September) and Liverpool (18 September). The more exotic ones are the Design Biennale in Ljubljana (7 October) and the Triennial architecture event in Lisbon (14 October). Last but not least, the kick-off of Manifesta 8, the inventory on current art, will be in Murcia, in Spain, on 9 October.

How do we judge those who plunder the planet? This is more or less the essence of the questions put forward by the duet Jennifer Allora Guillermo Calzadilla, two contemporary artists of Cuban origin (born in 1974) but who are active in the United States, a country they will represent at the 2010 Venice Biennale. We can see in the core of their installations all the discomfort our polluting and destructive civilization perpetrates in all impunity on the environment. The galerie Chantal Crousel presents five installations which release the same ill-feeling when we decipher them  from the polymerised mousse sculpture, which seems to mock the balance of Justice above it, to the camels hide used as an ironing board, including a fossilized gas pump.
 Allora et Calzadilla at galerie Chantal Crousel (10 rue Charlot, 75003 Paris) from 4 September to 15 October 2010.

Japanese mangas are everywhere today: Western adolescents and adults are great consumers of Japanese cartoon strips. But it is pure illusion to believe it is a recent art form, born spontaneously at the end of the XXth century. The roots of the mangas (literally «group of drawings used to learn painting») plunge at least as far as the painted scrolls of the XVIIth century. This work shows the different forms Japanese animation has taken over time, since Chinese shadowgraphs up to the animated films with the famous Chihiro. It includes interviews with the masters of the genre, presents ill-known illustrations (movies in black and white from the 1920s such as The animals at the Olympic Games, a photo report on how the Toei studios functioned in 1956) and dissects the far-reaching work of Kawamoto Kihachirô, the virtuoso of paper dolls and puppets dressed in silk.  Lanimation japonaise, du rouleau peint aux Pokemon by Brigitte Koyama-Richard, Flammarion, 2010, 248 p., 40 .

NEW YORK  The Asian Art Week, bringing together events in galleries and auction rooms, will be held from 10 to 20 September 2010.

PARIS  The XXVth Biennale des antiquaires will be held from 15 to 22 September 2010 at the Grand Palais.

PARIS - The 9th Parcours des mondes, international fair of primitive art, gathers some 60 galleries at Saint-Germain-des-Prés, from 8 to 12 September 2010.

PARIS The Torri gallery of contemporary art opened on 4 September 2010 at 7 rue Saint-Claude, with an exhibition dedicated to Vera Molnar.

ROISSY  The Archea museum of archaeology, including in particular updated objects on the Saint-Rieul necropolis from the Merovingian period, will be inaugurated on 10 September 2010.

VERSAILLES  Japanese artist Murakami will be the object of the annual contemporary art exhibition at the Château de Versailles, in the Grands Appartements (major apartments) and the Galerie des Glaces (gallery of mirrors), from 14 September to 12 December 2010.

BONN -The National Art and Exhibition Centre of the Federal Republic of Germany studies the fruitful results of the thought given to architecture and the art of building by one of the most famous German artists, born in Oldenburg in 1954.

VENICE -The Peggy Guggenheim Collection dedicates an ambitious retrospective to one of the greater names in American abstract Expressionism: Adolph Gottlieb (1903-1974), a close friend of Rothkos and Barnett Newmans.