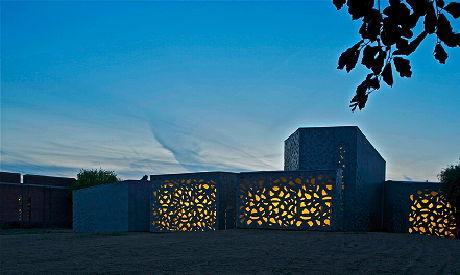 It is no longer a secret, France is centralized. Everything turns around Paris. At a time when the results of the decentralisation policy launched in the 1980s are partially questioned, culture itself seems to continue the campaign for a better occupation of the territory. The North-East passage, leading towards Luxemburg, Belgium and Germany is currently proving its reason for being. Attendance at the Centre Pompidou Metz goes beyond all forecasts and the Louvre Lens (designed by Sanaa, to be inaugurated in 2012) is expected to be equally successful. In the meantime, the city of Lille is temporarily in the limelight as it will baptize on 25 September the extension of the Musée dart moderne. The emblematic building by Roland Simounet (1983) is being enriched by «organic» architecture with Oriental moucharabiehs, by Manuelle Gautrand. The new LAM holds a collection of modern, contemporary and brut art that would gladly be adopted by any major Parisian museum...or others!
The LAM will open in Villeneuve-dAscq on 25 September 2010.

LAST DAYS! UNTIL SEPTEMBER 26, Do Not Miss... ATMOSPHERIC ENAMELS; the first large retrospective of «Impressionist» ceramics in a French public collection at the MUSÉE DE LA CÉRAMIQUE in ROUEN. Read Art-of-the-day article

AND ALSO... A CITY FOR IMPRESSIONISM MONET, PISSARRO AND GAUGUIN IN ROUEN. Read Art-of-the-day article

BASEL  We all remember an exhibition that left its mark at the Centre Pompidou on Vienna at the turn of the century ("L'Apocalypse joyeuse", in 1986). The subject is unlimited, since the Viennese at the time, who aimed for the total work of art, combined all genres, produced in all directions and thus anticipated the Bauhaus movement). It is also very attractive for the public at large. An additional approach is therefore very welcome. This new one relies of course on the major figures, Klimt who has become the most expensive painter in the world, and Schiele, crowned by his nefarious reputation. But it also presents two interpreters we see less often: Richard Gerstl and Arnold Schönberg, who obviously built his fame in another field. Drawings by Kokoschka, architecture sketches by Otto Wagner or Joseph Maria Olbrich, furniture, silverware and textiles complete the exhibition.
 Vienne 1900, Klimt, Schiele and their times at the Fondation Beyeler, from 26 September 2010 to 16 January 2011.

PARIS  The Medici family  led by the beautiful Laurence  is somehow the symbol of Italian Renaissance. We can see in their wake Machiavel, Pico de la Mirandola and a host of phenomenal artists, from Fra Angelico to Ghirlandaio, from Michel-Angelo to Botticelli. Fortunately the aim of the exhibition is much wider: the Medici were not only unusual patrons (for painters, musicians and scientists like Galileo), they also participated in the early interest in Antiquity, and their collections were as wealthy in Roman bronzes and cameos as in paintings by their contemporaries. And the Medici saga did not end with Laurence who was confronted to strict Savonarole. The 150 objects exhibited remind us that the family continued in the XVIth and XVIIth centuries, in particular as cardinals and popes (Leo X), who trusted other creators such as Bronzino or Rubens, while accumulating a remarkable cabinet of curiosities.
 Le trésor des Médicis at the musée Maillol, from 29 September 2010 to 31 January 2011.

A tribute to Kertész

PARIS  He is, with Brassaï, Cartier-Bresson, Izis or Willy Ronis, one of the giants of French photography of the XXth century. Like Brassaï, Izis or Willy Ronis, he too was of foreign origin, which shows the fusion capacity of Parisian culture at the time  André Kertész (1894-1985), born in Budapest and died in New York, produced some of his most famous shots, such as the distortions or the chimneys, during his stay in France, from 1925 to 1936, and then, by periods, after 1963, and when he bequeathed his fund, it was to the French state. The exhibition, with its 300 photos, is therefore a mandatory mark of recognition and at the same time, the first real retrospective dedicated to the artist in Europe. We can review his beginnings, his obsessions (shadows, rooftops), the golden age (reports for Vu in the 1930s), the more difficult moments (after WW I in the USA where he had to work for interior decorating magazines to survive), and recognition as of the 1960s.
 André Kertész at the Jeu de paume, from 28 September to 6 February 2010. Catalogue Hazan.

 The Victoria & Albert Museum, in London, dedicates an ambitious exhibition to Diaghilev and the Golden Age of the Ballets russes. From 25 September 2010 to 9 January 2011.

 In the English capital as well, the Royal Academy welcomes Treasures from Budapest.From 25 September to 12 December 2010.

PARIS  Specialists are looking closely at the opening sale at Drouot this month: the spectrum last July of a paralysis of the messenger boys (the red collars), following their indictment, was warded off in extremis by the choice of the firm Chenue (a specialist in handling and transporting works of art) to replace them. During this week of observation, there are no major sales to mention, as the interest is currently turned to sales outside of the Hôtel-Drouot. One of them is the sale of a fund of Art nouveau, offered by Tajan. No exceptional pieces but a very wealthy ensemble, that combines a porcelain vase in the shape of a squash, by Taxile Maximin Doat (estimated at 33 000 ) and a symbolist vase by Philippe Wolfers (23 000 ) with, in lieu of a plat de résistance, the furniture from the hotel Frison, built in Brussels by Victor Horta in 1894. The original furniture had burnt during the war, and the new owners, the Visser family, can be admired for the research they have carried out to replace it. Therefore what is sold today corresponds to an ideal  what could have been. This means Horta chairs (20 000  for a pair in padouk), Liberty mirrors, Houbin dressers (8 000 ), a Serrurier-Bovy chandelier (10 000 )
 LEurope Art nouveau at Tajan on 23 September 2010.

Marco Del Re, the return of grand decor

At a time when performance and video increasingly attract creators, public art is undergoing a certain loss of interest. It does not seem as if we have found the successors to Calder and Richard Serra Aside from the 1% of public buildings, which has given some significant results, private businessmen seem more prone to pick up where the aristocracy of the past let go. Marco del Re, a cosmopolitan artist, who shares his time between Rome and Paris, dedicates an important part of his activity to the orders he receives for public spaces. For the Institut of memory and Alzheimers disease, at the hospital of la Pitié-Salpêtrière, in Paris (inaugurated on 24 September), he created large frescoes in which muses in white sgraffiti stick out over an electric blue background. For the bar of the Burgundy (6 rue Duphot, 75001), a five-star hotel-boutique that just opened in Paris, he focused ont eh ceiling to inscribe over 50 m2 his illustration of Baudelaires poem Fleurs du mal. At moments art helps us make the link with history: it is believed that it was precisely in this building that the poets last belongings were up for auction after his death
 Marco Del Re is represented by the galerie Maeght.

Words from members of the Academie

The members of the French Academy are serious persons. We can realize this is we peruse through this collection of letters that go from Richelieu, the founder of the Académie française, up to Jean Cocteau. There is not even a drawing, nor any fantasy (aside from Flauberts blue paper, a sketch by Robert de Flers and a very amusing drawing by Jean Guitton, with the legend: «the Academy discussing over the word «con» (cunt or idiot, depending on the context) 16 February 1967»). But there is paper blackened with lines, with paragraphs, with totally different graphics. We would like to detect a reflection of the authors personality and we are caught in the visual game, by looking through the work: how did Buffon, Hugo or Claudel write? Perrault was the neatest a real typewriter  and Barbey dAurevilly was a well-known scrap writer
 LAcadémie française au fil des lettres, de 1635 à nos jours by Philippe de Flers and Thierry Bodin, Gallimard, 2010, 360 p., 29 .
 This important collection that belonged to Philippe de Flers, is shown at the musée des Lettres et Manuscrits (222 boulevard Saint-Germain, 76007, until 14 November 2010).

ISSY-LES-MOULINEAUX  The festival «Lart numérique aujourdhui» (Digital art today) will be held at the Cube from 22 September to 3 October 2010.

LUNÉVILLE  Seven years following the fire at the castle of Lunéville, the restored chapel reopened its doors for the Journées du patrimoine (Heritage days), on 18 September 2010.

PARIS  The Semaine des cultures étrangères (The Week of Foreign Cultures), with various exhibitions in foreign cultural centers, will take place from 24 September to 3 October 2010.

TOULOUSE  Le Printemps de septembre, a pluridisciplinary event of contemporary art, will be held from 24 September to 17 October 2010, under the sign of performance.