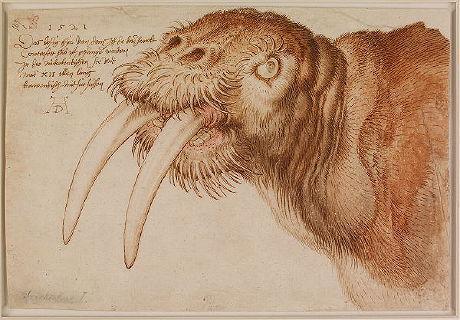 Albrecht Dürer, Head of a Walrus, 1521, drawing, The British Museum, Department of Prints and Drawings, London (exhibition Van Eyck to Dürer in Bruges).

Have they been popping high quantities of pills? Have they followed the good rules of hygiene -a little alcohol, no meat, a little sexual activity - these old men from Ecuador, from Okinawa or from the Caucasian mountains? Whatever their secret may be, in these times of blattant «youth at all cost», at the time the annual edition of the Guinness book of records comes out, certain creators stick out due to their remarkable age. Oscar Niemeyer has not been slowed down by the worldwide celebrations of his first centennial. At 102 years old, he is supervising the construction of the future Sambodrome in Rio de Janeiro and of a cultural center in Avilés in Spain, set to open in 2011. In the movies, Manoel de Oliveira, 101 years old, was at the Cannes festival last May to present his last movie, The strange Angelica affair and seemed ready to start a new one. Photographers lead particularly long lives: Cartier-Bresson died at the age of 96, Willy Ronis at 99, Manuel Alvarez-Bravo at 100. One of their elders is still alive: on 26 October an exhibit opened at the Círculo de Bellas Artes in Madrid dedicated to the Argentine Horacio Coppola. 104 and a half years old and images that go back to the Roaring Twenties

LAST DAYS! UNTIL NOVEMBER 1st... Do Not Miss... THOMAS SCHÜTTE, a pioneering work aimed at bridging the gap between art and architecture at the ART AND EXHIBITION HALL OF THE FEDERAL REPUBLIC OF GERMANY in BONN. Read Art-of-the-day article

Van Eyck and the Flemish revolution

BRUGES  Jan Van Eyck isone of the instigators on the Flemish side: the almighty power of oil painting, minute details in rendering landscapes and bourgeois interiors, «psychological» portraits, hard and without many trimmings. In the context of the five-year festival «Bruges Central»,a large exhibition shows how these values then spread towards Central Europe, digested and retransmitted in particular by a exceptional go-between, German artist Dürer. Here we see that the wider Europe is not a recent idea Aside from major works by these two artists, we can study here how this new current was illustrated in the towns and courts of Bohemia and Transylvania, from Bavaria to the Balkan countries, with paintings, drawings and prints by Witz, Patinir, Schongauer or the master of the Cabinet of Amsterdam.
 De Van Eyck à Dürer at the Groeningemuseum, from 28 October 2010 to 30 January 2011. Catalogue Hazan.

De Nittis, an Impressionist from the South

PARIS  He did not live to be 40, met glory and basked in the admiration of the Goncourt but today has been totally forgotten. The Petit Palais invites us to a re-discovery of Giuseppe de Nittis (1846-1884). Born in Barletta, in the Puglie, De Nittis as a teenager already wished to defend landscape painting against history painting and created a group of committed artists. As a result we have beautiful horizontal viewsof the countryside of Bari, of the trulli in the spring, of roads beaten by the sun. When he arrived in Paris he changed objects and brilliantly depicted high society, like Boldoni. While many paintings come from the Pinacoteca of Barletta, loans have come from much further away both from Italian museums as well as from foreign ones, and we are treated to rediscoveries such as Salon of princess Mathilde, presented in its two versions - pastels and oil  that were dissociated for a long time.
 Giuseppe de Nittis, la modernité élégante at the Petit Palais until 16 January 2011. Catalogue Paris Musées.

 In Buenos Aires, in Las Pampas : arte y cultura en el siglo XIX (Art and culture in the XIXth century in Las Palmas), the Proa foundation examines the influence of this typical landscape on the Argentine imagination. From 28 October 2010 to 31 December 2010.

 In Los juguetes de las vanguardias( The toys of the avant-gard), the Picasso museum in Malaga shows how the greater artists of the beginning of the XXth century (from Picasso to Calder and Torres-Garcia) turned the creation of toys into an activity in its own right . Until 30 January 2011.

 The Niépce museum in Chalon sur Saône brings up the problem of censorship in photography in LIndochine en guerre, des images sous contrôle, 1945-1954 (Images under control during the war in Indochina, 1945-1954). Until 16 January 2011.

PARIS - Winter is approaching, the cold is settling in: an auction house has foreseen this and offers a sale totally dedicated to paintings of mountains. There will be a few specialists such as Charles-Henri Contencin, Clément Castelli, Samivel or Pierre Comba and his mountain rescuers. None of the works is too expensive (from a few hundred Euros to 3 000 ) for these are «genre» paintings, demanded by a few lucky clients. With one great exception: the Trattalmen im winter by Alfons Walde is estimated between 80 000 and 120 000 . We can point out a few interesting photos of the Tairraz dynasty of Savoy and one surprise: an alpine view signed by Amintore Fanfani (1908-1999), who was Prime Minister in Italy. This little gouache dedicated to the governor of Bavaria Franz-Joseph Strauss, lets us in on the manner in which the Christian-Democrat insignia stayed aloof from the waves of Italian politics. Which will not be enough to push any higher than 400 or 500 
 Tableaux de montagne on 3 November 2010 at Drouot (Blanchet SVV)

Denis Monfleur, born in 1962, saw art as a sport ! A way of saying that from the beginning the artist privileged confrontation with hard, demanding materials, which he used without any preambles, cutting directly. He worked on wood and basalt (in particular for the commissions for the park of the Vesuvius). For ten years now granite, the most noble stone, has been absorbing his energy. The exhibition, set up in the former property of painter Caillebotte, presents some one hundred of these creations, heads and bodie sof angles or prophets, next to lUnijambiste, lExécuté or the Grand Christ. Some of them stand on a small pedestal, other require more space and measure up to three meters of height.
 Denis Monfleur's works in granite are presented at the Ferme Ornée, in Caillebotte's property, up to 12 December 2010. Catalogue : 40 .

The ten lives of Nadar

With Niépce and Daguerre, Nadar represents the third element of the trio the public at large considers the inventors of photography. This biography shows the vitality Félix Tournachon (1820-1910) showed in this field, in partnership or in conflict with his brother Adrien, and the strike of genius that was the invention of a well-sounding pseudonym easy to remember (first conceived «in order not to commit by my name all the literary crimes I have meditated»). And yet this only represents a part of the work since Nadar has many other interests, by need (he first made a living by drawing caricatures) or by passion (he was one of the pioneers in flying). He drew the portraits of Hugo, Baudelaire, Courbet and Berlioz, was a smart businessman (with his succesful workshop on boulevard des Capucines), and he was able to be a master of utopia by deciding to leave on foot to defend the Polish revolution
 Nadar, par Stéphanie de Saint Marc, Gallimard, 2010, 25,50 

AUCKLAND  The Scape biennial of contemporary art that was pushed back due to the earthquake that shook New-Zealand on 4 September 2010, has been reprogramed from 4 March to 17 April 2011.

FLORENCE - The great XIVth century crucifix from the church of Ognissanti, which is to be put back into its place on November 6 after five years of restoration, has just been attributed to Giotto.

Read the article in the Guardian.

NEW YORK - According to the Bloomberg news website, the emir of Qatar expressed his interest in buying Christie's from its owner, François Pinault.

NEW YORK  The major Autumn sales of Impressionist and modern art will be held on 2 and 3 November 2010 at Sothebys (with the Belle Romaine by Modigliani, estimated at 20 million $) and on 4 and 5 November at Christies (with, in particular, Violon et guitare by Juan Gris, estimated at 18 million $).

PARIS - The 2010 Marcel Duchamp prize was attributed on 23 October to artist Cyprien Gailard, born in 1980.

TORONTO - The 11th Toronto Art Fair, dedicated to modern and contemporary art, will be held from 28 October to 1 November 2010.