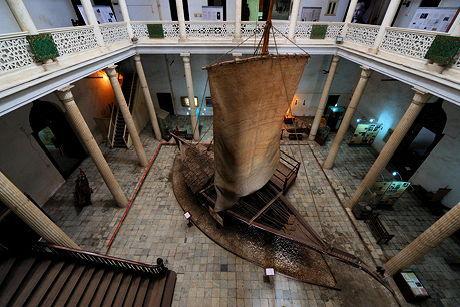 My museum in Zanzibar

Museums today are practically forced to constantly renew themselves, in order to be up to date with the latest fads. The symbol of this total power of the ephemeral, which would surprise the collectors of the past, is the temporary exhibition. Whether it is at the Louvre, the Prado, or the Met, it reinforces the finances and attracts the public towards the permanent collections. The institutions that do not have the means to offer themselves these quickly obsolete retrospectives slowly fall back to a second category with a limited budget, low attendance and out of date presentations. Paradoxically, one has a greater feeling of strangeness in them, as time has stopped on an indefinable yesterday. In Tanzania, one of the poorest countries in the world, the House of Wonders of Zanzibar is a living example. Though 300 000 tourists visit the spice island each year, in which the Old Town is included in UNESCOs World Heritage, they are in too much of a rush to get down to the beach to take advantage of this exquisite mix of odds and ends that was bombed during the shortest war in history (45 minutes in 1896). Here one can see side by side a natural-size dhow, khangas (pieces of feminine clothing), reconstituted interiors or a few fishermen knives. In the end, this is the prototype of what should fascinate a curious traveller, i.e. a museum where nothing happens.

GENOA -The fascination for the Mediterranean has been fed for a long time by its role in Roman Antiquity. The enthusiasts of the Grand Tour in the XVIIIth century looked for the traces of Virgil and the Sibyl Only recently, with Courbet, Corot and then Van Gogh, did the French coast receive such favorable treatment. This exhibition, with 80 paintings from around the world, draws up a panorama of the main schools and movements  Impressionism, Pointillism, the Fauvists  which made it a recurrent motif. The works by Monet, Cézanne or Bonnard - efficiently relayed by «secondary» painters such as Loubon, Ziem or Monticelli  contributed to turn Frances Provence region into one of the emblematic landscapes of modern art.
 Mediterraneo, da Courbet a Monet a Matisse at the Palazzo Ducale, from 27 November 2010 to 1st May 2011.

When China dressed its Emperor

LONDON  Blue represents the sky, yellow represents the earth, red is for the sun, light blue is for the moon: for the Chinese Qing emperors (1644-1911), the symbol of colors was clearly coded. By rummaging through the Palace museums treasures, at the heart of the Forbidden City, the Victoria & Albert Museum shows the richness of dress of the Manchu dynasty: clothes for travelling, for representation, for family life, vests for concubines or «dragon» costumes, hunting outfits or ceremonial armor One is dazzled by the quality of the manufacture: steel, cotton, satin or silk which workshops from southern China produced on centennial looms. These dress traditions were still very much alive at the beginning of photography as we can see in these images of the Empress in a riding vest or wearing a headdress (dianzi). The arrival of the mechanic loom at the end of the XIXth century and the fall of the Qing in 1911 put an end to this abundance of materials and precious ornaments.
 Imperial Chinese Robes at the Victoria & Albert Museum, from 7 December 2010 to 27 February 2011.

MARTIGNY (Switzerland)  Few museums would accept to lend their works for six months, a very long time. There is an explanation though, and a simple one, to this exhibition. It is dedicated to a private Swiss collection that often contributed to the retrospectives of the Fondation Gianadda. We will therefore admire once again paintings seen before, such as Julie au violon by Berthe Morisot or Les Blanchisseuses by Degas. But the essential part of the 120 works have not been seen before and will tell how a collector can build up a coherent ensemble without necessarily following one school or one specific theme. The space it covers is simply impressive, from Monets Nymphéas to oils by Bonnard, from the third version of Mystère catholique by Maurice Denis to Dufys gouaches and Signacs watercolors on the ports in France, and ending with the large virtuoso pastels by Sam Szafran, representing succulents or staircases  The announced vital lead is «color» but we can very easily distinguish another one: a personal rereading of art of the last century.
 De Renoir à Sam Szafran at the fondation Gianadda, from 10 December to 12 June 2011.

 In Deux visions du cantique des cantiques (Two visions of the Song of Songs), the musée national Marc Chagall, in Cannes, presents the versions of the biblical text we owe to Chagall and Kupka. Until 14 March 2011.

 In Edinburgh, the National Scottish Gallery of Modern Art dedicates a room to Alasdair Gray, one of the most polyvalent artists (painter, writer, scenographer) and most influential of the last half a century in Scotland. Until the Spring 2011.

 In Madrid, the Fundación March dedicates the first European retrospective to Asher B. Durant (1796-1886), painter virtuoso of the North American landscape. Until 9 January 2011.

LONDON-Phillips de Pury, the respectable English auction house which Bernard Arnault took control of for a moment and with which he hoped to surpass Christies (held by his rival François Pinault), had been used for a long time to have a role of the foil. The «Carte blanche» sale of modern and contemporary art on 10 November this year, concocted by art dealer Philippe Ségalot and which produced 143 million $, put it back on its feet. As it looks for a personalization marked by its auctions, Phillips de Pury offers a Music session in London. It will be made up of, as the name indicates, by works inspired by music, with a violoncello broken by Arman and conceptual works Martin Creed and John Armleder, as well as Joel Brodskys mythical portrait of the leader of the Doors, Jim Morrison with his naked torso. The theme will be exploited to the end with a sound carpet entrusted to the Hot Chip DJ
 Music Sale at Phillips De Pury (Howick Place) on 10 December 2010.

The mental landscapes of Ellen Kooi

She is part of the new wave of North-European photography, playing with shrilling colors, enigmatic atmospheres, with Nature always present but constantly under the gnawing threat of humans. Ellen Kooi was born in 1963 and seems to have reached the summit, as she has participated in many private and public collections (whether it is the French National fund of contemporary art or the Rabobank), and she will be the object in 2011 of retrospectives at the Château dEau in Toulouse and the Stedelijk Museum in Amsterdam. The Institut néerlandais presents a selection of her work, in which her taste for staging is obvious, with a preference for Hitchcock style, low-angle shots. A real atmosphere emerges from her over-worked images, in which symbolism, with children who are too big, flowers that are too green, persons who are too alone, easily has a nightmarish after-taste.
 Ellen Kooi is presented at the Institut néerlandais (121 rue de Lille, 75007) until 22 December 2010. Catalogue Filigranes.

The intention is worthy. The author wished to attract attention to major works which are not the property of a well-known museums and consequently do not have a great, well-deserved reputation. The inspiration is refined, as the author remembers the talks Sacha Guitry gave over the radio and which he listened to as a child, in which he described his «one hundred marvels». The choice is good: whether hanging in Grenoble, Douai, Valenciennes, Tourcoing or Albi, we see a portrait by Jean Clouet, an Apothéose by Simon Vouet, ruins of Dresden rendered by Bernardo Bellotto through a

LONDON  The Turner prize for contemporary art, given under the aegis of the Tate Gallery, has been awarded to Susan Philipsz for her sound installation Lowlands.

LONDON  A copy of the book Birds of America by John James Audubon was sold for 8.3 million £ at Sothebys on 7 December 2010, thus becoming the most expensive book in the history of public auctions.

MADRID  The theft committed in a warehouse at Getafe (Madrid suburb) and declared on 2 December 2010 is the most important one carried out in Spain. It includes 30 works by international artists, among them Picasso, Tapies and Botero.

MOSCOW  The House of Photography of Moscow will be re-inaugurated, after five years of works, on 9 December 2010, with the name of MAMM (Multimedia Art Museum Moscow). The MAMM, that will keep 88 000 works, will have 11 exhibition rooms over 9000 m2.

WASHINGTON  The removal of a video by David Wojnarowitz Fire in my Belly from an exhibition at the National Portrait Gallery, with the excuse that it is «anti-Christian», has caused a violent controversy in the United-States.

ROUEN - The musée des Beaux-Arts offers the first exhibition grouping together architect and designer Sylvain Dubuisson and the architecture-trained sculptor Vincent Barré. The event has taken the shape of a true immersion of the two artists in the middle of the museum and its collections.