This is our last issue for 2010. Our next newsletter will appear on January 6 2011. MERRY CHRISTMAS AND HAPPY NEW YEAR! 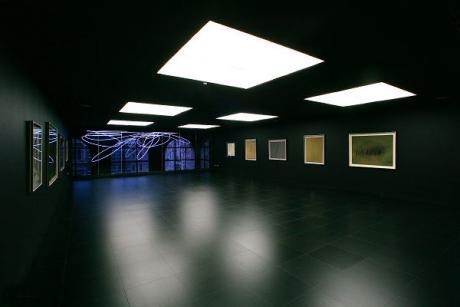 The Museo del Novecento in Milan (with a work by Lucion Fontana). Photo Gianni Congiu.

Milano on the map of the XXth century

Following Romes spectacular double opening last spring of the Maxxi and the Macro museums, the Northern economic capital could not stay behind. Milano has just opened a new institution that has been in gestation for many years, the Museo del Novecento (Museum of the XXth century). It is nested in the Arengario, a typical fascist building, worked over by the team of architect Italo Rota, and groups together 400 works from the municipal collections, from 1900 to the symbolic caesura of 1968. A few famous masterpieces are presented, starting with the Il Quarto Stato (The fourth Estate) by Pellizza da Volpedo, the traditional cover of history books for high-school students in Italy. It is accompanied by beautiful Futurist and metaphysical ensembles (in particular Boccioni and De Chirico), by major names of the twenties and thirties (Sironi, Morandi, Campigli), up to Lucio Fontana (one of the museums key works is the installation, on the last floor, of the ceiling he designed for a hotel on the island of Elbe) and to Arte Povera by Jannis Kounellis and Luciano Fabro. The museum anticipated a need often overlooked in Italian museums, and includes a restaurant and an Electa bookstore, well stocked up and that we owe to designer Michele de Lucchi.
The Museo del Novecento opened in Milano on 6 December 2010.

HURRY UP! LAST DAYS! UNTIL DECEMBER 30... Do not miss THE SUDRE, two generations of brilliant professionals who cover the whole field of photography at the MUSEE DE L'HOSPICE SAINT-ROCH in ISSOUDUN. Read Art-of-the-day article

AMSTERDAM  He died 4 years before Vermeer, at the age of 37, but at his time he was more famous. In a few occasions, he was even attributed some of the Masters works. Posterity gave Gabriel Metsu (1629-1667) a lesser place, but he was a virtuoso in the reproduction of interiors and the bourgeois activities of wealthy Holland in the XVIIth century. In dedicating this exhibition to him the Rijksmuseum took the opportunity to bring in works from far away and to define new attributions. Fortunately Metsu was more prolific and more competitive than his colleague! We clearly see different phases in his career, from biblical productions in the beginning to genre scenes during his more mature years, alternating drunkards, smokers and women to the letter.
 Gabriel Metsu at the Rijksmuseum, from 16 December 2010 to 20 March 2011

MADRID Mexico during the first half of the XXth century represents to the European public the Revolution (Pancho Villa and Zapata) and the muralist artists (Rivera and his friends). This exhibition reminds us that artistic fermentation was not cumbered by borders, and the Mexican avant-garde of the time was greatly remarked in the fields of books, magazines and posters. Diego Rivera and Orozco are of course present (with, respectively, the cover of the Fortune magazine in 1932 and Steinbecks novel The Pearl . The collection presented allows us to see lesser-known creators, wit often extravagant personalities such as Miguel Covarrubias (a cosmopolitan and polymorphic creator who lived in Bali, was a drawer and then a ballet director), José Chávez Morado (xylographs on night life in Mexico), Dr. Atl, «painter and volcano specialist», or Nahui Olin, a muse and a free woman of the same caliber as Frida Kahlo. The catalogue is a model in its kind, with a great number of illustrations, texts well targeted (the role of typography, illustrations for children, etc) and very detailed biographic notes.
 México ilustrado 1920-1950 at the Instituto Cervantes until 9 January 2011. Catalogue RM, 2010, 286 p., 65 .

ROVERETO (Italy)  Modigliani has once again broken records ($61.5 million at Sotheby's New York on 2 November 2010 for La Belle Romaine), thus confirming his status as a sure value among the giants of the XXth century. This infatuation concerns his paintings and his drawings, not so much his sculptures. We can all remember the discovery in 1984, in a canal in Livorno, of heads presumably sculpted by the artist. This affair devaluated this aspect of his work. Actually the heads had been produced with a Black & Decker drill by local jokers. Consequently we are invited to a prudent rediscovery by this exhibition at the MART, the museum of Trento and Rovereto. The sculptures correspond to a very precise period in Modiglianis career, between 1911 and 1913, when he abandoned painting to dedicate himself to this art. His trials, inspired by medieval statuary, African art and Brancusi, would influence his later paintings. Only 25 heads have been identified to date by specialist Ambrogio Ceroni. We can see eight of them, well accompanied by sculptures by Picasso, Zadkine and Elie Nadelman, a Gouro mask from the Ivory Coast or Battista Sforza, by Francesco Laurana, a very refined bust from the Renaissance.
 Modigliani sculptor at the MART, from 18 December 2010 to 27 March 2011.

 How do archaeologists and scientists decipher the information they inherit from long-gone times? This is the theme of Prehistory(s) the investigation at the Museum dhistoire naturelle in Toulouse. Until the spring of 2011.

 In Valence, the IVAM pays tribute to one of the most prolific architects of the XXth century, a virtuoso of reinforced concrete vaults. He was formed in Spain but was very active in Mexico: Félix Candela (1910-1997). Until 2 January 2011.

PARIS  Are auctions partners of the Grand Larousse universel dictionary? Are they an instrument of knowledge and a tool of lexicology? It could be a way of considering the huge offer of the Parisian market, that allows us each day to go through the art market in all its shapes and forms  The sale at Artcurial, rightly named Curiosités, is in this aspect a real pot-pourri apt of nourishing curiosity. While we can identify a few lots at more than 10 000  (of which a Saint Peter in chains in majolica), most of the lots will be dispersed for a few hundred euros. These are objects that survived through the centuries, whose function has disappeared but which await buyers capable of giving them a new destination: albarello, tripods, pharmacy jars, patients cups, fine gun powder, dippers, tobacco grater, ginger bread board or a geologists cane. There is even a chastity belt, and, to magnify the sensation of mystery, a two-headed calf (1500 ). Sometimes auctions can have more to do with Préverts poetry than with business
 Curiosités on 18 December 2010 at Drouot-Richelieu (by Artcurial)

Louidgi Beltrame and the nightmare of the architect

Contemporary art has the tendency sometimes to flee the reality that is around it, or in any case to give preference to interior visions. It is not the case with Louidgi Beltrame (born in 1971), whose work could well be qualified as documentary. He works by series, and has submerged himself in the history of modern architecture, retranscribing in his own way in video accompanied by a voice in the background and punk music, with drawings and prints as a back up  the myths of Brasilia (with Niemeyer in as statue of the Commendatore), Chandigarh (same role for Le Corbusier), and more recently, communist Ukraine. In Energodar, the artist ventures into venues no tourist would be attracted to, such as Prypiat, once a city with a promising future, today a doomed city, right next to Chernobyl. Between radars out of use and rusted carcasses of military buildings, Beltrame films a classic example which reveals itself as being a simple parable: how do utopias collapse?
 Energodar by Louidgi Beltrame is presented at the fondation Ricard, until 23 December 2010.

Historian Alfred Fierro had published a few years ago a Guide du Paris disparu (Guide of a Paris that no longer is). Joël Cuénot offers in his own manner a return to the capitals past to bring back to life monuments that were knocked down a long time ago. Through an amusing fiction, on the pont des Arts in Paris, he runs into the Wandering Jew who is about to go up the Seine and through time, and he entrusts him with a camera and film (argentiques) which the biblical hero will know how to send back to him with the report of his adventures  The surprise is elsewhere. The author evoked the buildings of the past through anecdotes and, mainly, through very precise models. The pump of the Samaritaine and the palace of the Tuileries are side by side with the mill of the Monnaie or the Grand Châtelet, the sinister prison. Certain reconstitutions are models in their genre, such as the Saint-Michel and the Meuniers bridges, covered with half-timbered houses, the construction site of the Pont-Royal or the Louvre in the time of Charles V, overflowing with turrets and watchtowers. At the end of the journey, one is convinced that the Paris that disappeared is well worth the one that survived: one just needed some imagination to resurrect it in a convincing manner
 Paris à rebrousse-temps, Joël Cuénot publishing house, 2010, 216 p., 49 .

AVIGNON  The Collection Lambert celebrates the 10th anniversary of its arrival in Avignon with a manifest-exhibition called Je crois aux miracles (I believe in miracles).

BALTIMORE - The Museum of archaeology of the Johns Hopkins University has reopened on 5 December 2010 in its new locations, following a renovation project of 85 million $.

KIEV  The Future Generation prize, worth 100 000 $, given by the Pinchuk Art Centre, was awarded on 10 December 2010 to Brazilian artist Cinthia Marcelle.

MADRID  The Cerralbo museum, the prototype of an aristocratic house of the end of the XIXthe century, reopened 14 December 2010 after four years of restoration.

PARIS - The 9th edition of ArtistBook, the artist book fair, will be held at the Centre Pompidou, from 17 to 19 December 2010.

ROME  The Portrait of a musician, the only masculine representation attributed to Leonardo da Vinci, will be leaving for the first time the Biblioteca Ambrosiana in Milano to take part in an private exhibition at the museum of the Capidoglio, from 11 December 2010 to 27 February 2011.

ANCIENT MEDECINE, FROM THE BODY TO THE STARS

GENEVA - The new exhibition at the Fondation Martin Bodmer invites us to follow the adventure of the art of healing from a historic, scientific and artistic perspective. From mythology up to the conceptions of the XVIIth century, the edifice of knowledge and know-how was built through the contact with very diverse influences.

GENEVA - This exceptional collection of one hundred sixty-two pieces of 16th to 18th century faience and porcelain was constituted by Gustaaf Hamburger and his wife Clara, née Gerzon. It was generously offered to the Musée Ariana in 2007 by their daughter.