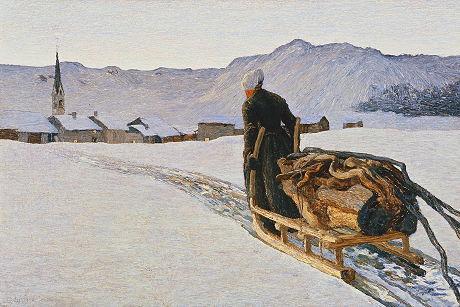 It is considered good taste to complain every year, just as it starts, about the avalanche of cultural events that await us. We think we are tired before even beginning  In 2011, the crisis will nonetheless leave its mark, as there will be less exhibitions and there seems to be a constant search for values that are «confirmed». Everyone is scared to take risks  The Year of Mexico in France, the 150th anniversary of Italian Unity will be some of the transversal themes to give way to a series of exhibitions. As for the rest, the choice is surely too rich for any normally active person of the XXIth century to cover. Here is our selection, which is only partial and which we will enrich through our weekly newsletters. Enjoy your visit!

One of the essential artists of these last decades, Joseph Beuys, he who slept with Coyotes and dressed in felt, will enjoy an ambitious retrospective at the Kunsthaus Zurich (13 May). An Italian star of a similar caliber  Michelangelo Pistoletto - will have been honored shortly before at the Maxxi in Rome (3 March), which is slowly marking its bearings, less than a year after its opening. Just a few weeks apart, the European spectrum will be covered from one extreme to the other between the virtuoso of figurative art, Antonio López, at the Reina Sofia in Madrid (28 June), and the champion of outsized installations, Anish Kapoor in Monumenta 2011 at the Grand Palais in Paris (11-23 May). We will have the same enjoyable opposition in styles, on the same day, between Mel Ramos, professor of pin-ups (at the Albertina in Vienna on 18 February) and Luc Tuymans, the paladin of the most recent figurative art, at the Palais des Beaux-Arts in Brussels (18 February). Collective retrospectives will give us access to Indian art, everyones new pet Paris-Delhi-Bombayat the Centre Pompidou, 25 May) and to the Scène artistique mexicaine (Mexican artistic scene) at the musée dArt moderne de la Ville de Paris (31 May).

BEWARE! LAST DAYS! UNTIL 9 JANUARY...DO NOT MISS... THE CLARE VAN BEUSEKOM-HAMBURGER DONATION at the ARIANA MUSEUM in GENEVA. Read the article in Art Art-of-the-Day

ALSO... ADOLPH GOTTLIEB; the first retrospective in Italy by the famous representative of Abstract Expressionism at the PEGGY GUGGENHEIM in VENICE. Read the article in Art-of-the-Day

LAST BUT NOT LEAST... UNTIL 10 JANUAY...THROUGH THE LABYRINTHS; the evolution of the concept and the representation of the labyrinth in history at the CCCB in BARCELONA. Read the article in Art-of-the-Day

Museums have various missions, among which the initiation to the history of art is not the least important. It needs to shed light periodically on artists or movements of the past, to decipher and re-evaluate them. This concern can be accompanied by the wish of setting the institution concerned back on its feet, which is not always compatible. In the presence of «blockbusters», one can suspect such an objective  we must go check on site for Egon Schiele at the Belvédère in Vienna (17 February), Van Dongen At the musée dArt moderne de la Ville de Paris (25 March), Manet at the musée dOrsay (le 5 avril), Miro at Tate Modern (14 April) or Magritte at Tate Liverpool (24 June). It is a pleasure to see masters rarely shown Franz Xaver Messerschmidt at the Louvre (28 January), Segantini at the fondation Beyeler in Basel (16 January), Jan Gossaert at the National Gallery in London (23 February), the very colorful Jan Steen at the Mauritshuis at The Hague (3 March) or Gino Severini at the Orangerie, in Paris (27 April). May they too be given recognition by the public

The taste for exploring

This is a field which has been gaining popularity over the last few years, and that continues to have beautiful surprises in store for us. Certain current authors are becoming real references such as the South-African David Goldblatt (Fondation Cartier-Bresson, Paris, 12 January) while others, preceded by a nefarious reputation, could finally make it such as androgen Claude Cahun (at the Jeu de paume, Paris, 24 May). Yet, the most enticing retrospectives are the ones based on themes such as Photosculpture At the Kunsthaus Zurich, definitely very active (25 February), showing the evolution of sculpture photography over the last century. In Photographie préraphaélite (8 March), the musée dOrsay unveils another aspect of the activity of Rossetti and his friends. Workers Photography at the Reina Sofia (6 April) explores ill-known regions, where anonymous talents abound.

Faith and far away lands

The year in France will be very Maya After the Masques mayas presented at the Pinacothèque de Paris (1 March), the museum of quai Branly will push the theme further with an exhibition with a rather non-committal title, Maya Secrets (26 June). Before that the same Parisian museum will have invited us to revisit one of the great classics of African ethnography, the Dogon country, which both Marcel Griaule and Miquel Barceló are so enamored with Dogon, 5 April). The British Museum tackles a field that maintains all of its mystery due to the practical impossibility of reaching it, Afghanistan, crossroads of the Ancient world (3 March). The Hermitage Amsterdam will continue to explore Russian culture with its Art of the Orthodox Church (19 March), which we could visit following a review of the Romanov, tsars et collectionneurs also at the Pinacothèque, 26 January). The thirst our fellow humans have for spirituality and mysticism to repel their daily materialism should ensure the success of Treasures of Heaven at the British Museum (23 June).

The end of a golden age?

The impetuous wave of new museums, that allowed world-known architects such as Gehry, Hadid, Nouvel or Eisenman to be sacred, has lost most of its force since the end of the years 2000. Guggenheim and quai Branly-style museums are no longer inaugurated by the dozen. Aside from the Mathaf, the Arab museum of modern art at Doha, inaugurated on 30 December 2010, the first to show up over the horizon will be new Dali museum in Saint-Petersburg (in the U.S.A.), in the presence of infant Elena, on 11 January, followed by the Museum of Moving Image in New York (15 January), then the more discreet musée Mandet de Riom (France) on 21 January. There is great anticipation for the return of the musée du Luxembourg (Paris), the venue of very successful retrospectives and which will re-open with an exhibition on Cranach from Brussels (9 February). The birth of a new national Museum of Liverpool (dedicated to the citys history), one of the most important ones built in Great-Britain in the last century should cause a lot of excitement (date to be specified). In New York, the Museum for African Art will reopen in April on Fifth Avenue, after five years of refurbishing. On the other hand, the Guggenheim Abu Dhabi, initially announced for 2011, will only emerge 2 years later, and will open simultaneously with its neighbor, the Louvre.

Venice and the others

The habit of biennales seems to endure. In this year with an odd number, the 54th edition of the most senior of them all, the one of Venice, is very much awaited by all. It will open on 4 June in the Giardini and the director will be Bice Curiger from the Kunsthaus Zurich. One of the greatest novelties will be the presence, for the first time, of a pavilion of the Vatican. Our imagination will have been previously tickled by «emerging» scenes at the Biennale of Singapore (13 March-15 May) and that of Sharjah in the Emirates (16 March-16 May) or by discovering American novelties at Montreal (1-31 May), which will ask if Mallarmé and his famous poem «A dice-throw never abolishes chance» could be at the origin of modern art? The second half of the year will be just as rich with three biennales for the sole month of September, those of Lyon, Istanbul and Vancouver. The latter will explore the universe of performance, which has met a true renaissance.