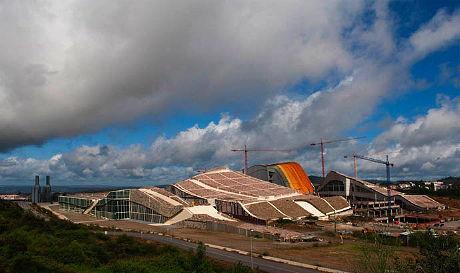 Soon the meter will show 200 This is the 199th weekly edition of art-of-the-day.info. (The French version, more precocious by one week, is celebrating its 200th issue). Launched in April 2006, it will soon celebrate its 5th anniversary. In a world increasingly in search for what is instantaneous, over a constantly moving internet, this is not such a bad score 199 issues represent 199 books reviewed, 199 auctions, the details of some 600 exhibitions and more than 1000 «brief notices» reflecting the vitality and diversity of artistic news through our continent, and beyond. Just remember, in the very first issues, we spoke of the opening of the museum of Ara Pacis in Rome, of the Pinault foundation in Venice, of the new museum of the Orangerie in Paris. How can five years have gone by so quickly? All of those newsletters, freely accessible of course, allow us to usefully gauge the time passed and to replace the events in an indispensable perspective. See you in 5 years for another assessment

A new road to Saint Jacques

SANTIAGO DE COMPOSTELA - Delays, budgets that have been multiplied more than once, a truncated program, a sponsor (Manuel Fraga) who was one of Francos ministers facing a rather progressive architect (New-Yorker Peter Eisenman), who saw a part of the project pulled out of his hands  A book could be written about the genesis on the City of Culture that has just been inaugurated in Galicia. In spite of all these obstacles, observers are rather unanimous in believing this work will mark contemporary architecture. An area of nearly 150 000 m2, «deconstructed» volumes, a rather surprising profile  and a future that is difficult to figure out. Construction continues, since only two of the six buildings planned, the Library and the Archives of Galicia, have been opened; while costs, estimated at 100 million Euros in the call for bids, could be multiplied by five by the end of the works. Architecture has a weakness for white elephants
 La Cidade da Cultura was inaugurated on 11 January 2011.

BASEL  He started on the shores of the lake of Garda and ended at nearly 3000 metres of altitude (2731 m exactly) at the age of 41in 1899, as he was working on a triptych on the summits of the Engadine, in Switzerland. The Beyeler foundation is paying a tribute to an ill-known master today, Giovanni Segantini. He was a lover of mountains, famous in his time and also the master of Giovanni Giacometti, Albertos father. The nearly fifty paintings present the greater part of his production. There are a few portraits, done during his youth at the academy of Brera (in Milano) and in Brianza, the Lombard district specialized in manufacturing furniture and where his brother-in-law Carlo Bugatti worked. But the exhibit presents above all landscapes, done in a divisionist technique, in increasingly clear and luminous colors. Frugal, almost to the point of being mystic, Segantini is one of the greater interpreters of the Alps. His passion accompanied him to the end, when  suffering from a peritonitis while in his refuge and too far from any help  he succumbed in front of his beloved peaks.
 Giovanni Segantini at the fondation Beyeler, from 16 January to 25 April 2011

Over at the Farnese home

ROME  We forget much too easily that this is not the first time the sumptuous collection of the Farnèse family, with its series of captains, popes and cardinals, is rebuilt. A superb sample had been shown in 1995, in a highly evocative venue, the Farnese palace in Colorno, near Parma. But this opportunity is truly special, since the collection is being exhibited for the first time since it was scattered in its place of origin, the Farnese palace in Rome, designed by Michel-Angelo and which houses the French Embassy. Aside from the nearly 150 masterpieces that travelled from near such as the tapestries from the Quirinale  or far -many from Naples such as the Farnese bull or the Portrait of Paul III by Tiziano this will be an opportunity for visitors to see the decorations in situ, in particular the famous Galleria Carracci.
 Palazzo Farnese Dalle collezioni rinascimentali as Ambasciata di Francia at the Farnese Palace, up to 17 April 2010.

 The Fondation Cartier-Bresson presents a major South-African photographer, David Goldblatt who documented the last hours of apartheid and the difficult transition towards a new way of living together. From 12 January to 17 April 2011.

 The Musée dart moderne de la Ville de Paris dedicates a monographic exhibition to Inci Eviner, a committed artist in the scene of Istanbul. From 13 January to 3 April 2011.

 Ecrins impériaux (Imperial cases), at the Musée national de la Légion dHonneur, retraces the history of Napoleon through his main decorations. From 19 January to 29 May 2011.

Anne Brégeaut, the past in bright colors

Half-way between conceptual and figurative art (which obviously do not have a vocation to systematically oppose one another), Anne Brégeaut can build small wooden reliefs, exhibit a broken, glued back, cup and even draw with talent scenes full of color or boards with abstract motives. She is not the ideal client for taxonomists If it were necessary to find a link between these diverse expressions, it would probably be the ever-growing power of the past, which is dissected like an intense emotion, like a wound that has not yet healed. These Petits Paysages oubliés (Little forgotten landscapes), that carry in their bags green, childhood forests, these gouaches on wood or on paper, peopled by lovers, by lions, by pink cars, lost in jungles of wall paper, inevitably make us think of an ideal past, a source of permanent nostalgia.
 The galerie Semiose, which has just moved (54 rue Chapon, 75003) exhibits Anne Brégeaut from 8 January to 26 February 2011.

PARIS  We often complain about the lack of themed sales at Drouot. Here is an opportunity to belie that reality, since the ensemble that will be auctioned on 24 January 2010, the fruit of the research of an impassioned collector -Jacques Le Breton  deals solely with electrical house appliances from the twenties to the sixties. What was considered simple tools of every day life has been raised by time to the status of design «vintage» pieces. Next to the Calor «Soleil» ventilator, the Bakelite heating plates, the nickel-plated brass percolators, we will rediscover Toilectro radiators that resemble Greek temples, or Goblin Teasmade teapots. All the lots are affordable, for a few tens or a few hundred Euros, with a few exceptions such as this Perma hair roller heater (estimated at 600 ), the shaker with a double motor from the café de Flore (estimated at 1500 ) or the radiator from the former brothel Le Chabanais (3000 )! In the era of the iPod and the Blackberry, some of these objects are so enigmatic (is this a radio, a frying pan, an oven, a projector?) that the non-initiated may have some trouble determining their function. It is a shame the on-line catalogue does not unveil the mysteries
 Vente La maison électrique at Drouot-Richelieu in 14 January 2011 (Chayette Cheval SVV et Enchères Pays de Loire SVV)

Want to hear about a thrilling life in order to start the year off on the right foot? Then take a look at that of Mayakovsky, the object of a rich and largely illustrated monograph. We can review what we know about the poet, a revolutionary of verse and a fool for speed, a cousin of the Futurists. But we also discover that the author of Cloud in pants was also very active in other fields, transforming when necessary into a typographer, a movie director or a drawer. During the Revolution, a deep creative pot, the borders between the various forms of art were erased and all the disciplines interpenetrated one another. While the biography describes his literary work and goes into the gossip as well (Mayakovsky accused by Gorki of transmitting syphilis to a young girl, the love triangles between Lily Brik, the poet and other conquests), it also shows the extraordinary appetite for meeting actors of the European culture, in particular in the visual arts: Rodchenko, Gontcharova, the Delaunay couple, Man Ray and Duchamp whom he met in the staircase of the Istria hotel in Paris. Even though Mayakovsky died young (after Essenine in 1925, he too committed suicide at the age of 37 in 1930), one has the impression he had the time to live various lives
 La vie en jeu, une biographie de Vladimir Maïakovski by Bengt Jangfeldt, Albin Michel, 2009, 25 .

CAIRO  The supreme Council of Egyptian antiquities announced the future closing of Tutenkamons tomb and the creation of a Replica Valley .

HONG KONG  Larry Gagosian adds a new star to his galaxy by inaugurating on 18 January 2011 his gallery in Hong Kong with a new diamond skull by Damien Hirst.

LONDON  The 23rd edition of the London Art Fair, dedicated to modern and contemporary art, will host 120 galleries from 19 to 23 January 2011.

SAINT-PETERSBURG (Florida)  The Salvador Dali Museum opened on 11 January 2011 in a new building.

WASHINGTON  The Phillips Collection, well-known for its collections of French painting, will reopen on 15 January 2011, four months after a fire damaged the building.