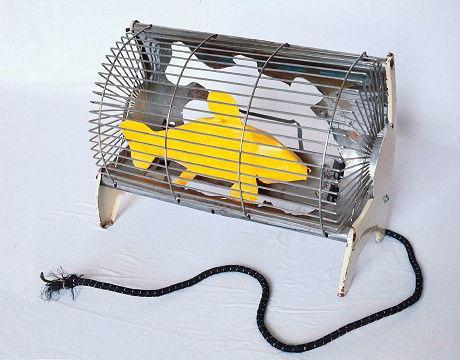 Hungary has hardly taken the seat of the Presidency of Europe, its controversial laws regarding freedom of the press and the supervision it has placed over its pension funds have already given it a bad reputation. What is left of cultural Budapest, known in the past as the «Paris of Central Europe»? While the Opera and the major theatres juggle between avant-garde and nationalist temptation, artists from around the world, attracted by low rents and a live scene, have come by throngs to settle in the Hungarian capital. We see the rise of original places such as Brody House, a hotel-gallery set up in the former home of a prime minister, totally decorated by visual artists. On the other hand the «classic» patrimony seems to be a bit ignored by tourists who are more attracted by the thermal experience. The national museum, full of historic souvenirs, brimming with the adventures of the Andrassy and Rakoczi, is filled solely by school children. As for the Museum of fine arts, the rooms most visited are not the ones that present dozens of Rafaelo, Cranach and Murillo but rather the ones with the nth exhibition of Botero Fortunately, the exhibitions that show the masterpieces of the Hungarian capital flourish abroad. Last autumn we saw one in London, at the Royal Academy. There will be others, as of 26 January, at the Pinacothèque in Paris, which will celebrate the collection of the well-known Esterhazy family. If you cannot go to Budapest, have Budapest come to you

The website of the museum of Fine Arts of Budapest.

The website of the Hungarian national museum of Budapest

The exhibition « Les Esterhazy, princes et collectionneurs » at the Pinacothèque de Paris, from 26 January to 29 May 2011

The English get into shapes

LONDON  A sculptor across the channel? Henry Moore, no doubt. Barbara Hepworth et Anthony Caro, maybe. And then? Our knowledge of XXth century British sculpture is limited to a handful of firm values, and we leave most of the artists in the shadow. The Royal Academy has chosen to shed light on this mixed population, through confrontations it feels will be audacious, grouping together by themes. There will be both figurative compositions (the statue of Queen Victoria by Alfred Gilbert) and provocative, abstract assemblages (Electric fire with yellow fish by Bill Woodrow). By showing a whole series of artists who deserve to be more visible, such as Jacob Epstein and Leon Underwood, the Royal Academy will also enhance its own role, over more than a century, in promoting contemporary creativity.
 Modern British Sculpture at the Victoria & Albert Museum, from 22 January to 7 April 2011.

PARIS -How was the mind-boggling collection of the Hermitage built? The Pinacothèque of Paris wonders, and is not totally naive in its questioning. The Parisian institution, known for some years now for its temporary exhibitions that attract large crowds, has decided to open a permanent collection. This is a daring challenge, based on loans from private collectors and museums (like the one from Brescia, closed for works), to be inaugurated precisely at the same time as it shows emblematic works from the Russian museum. Most of them were bought under the different who had an artistic inkling  Peter the Great, Alexander I and Nicolas I (who opened the Hermitage to the public)  but they are the result in particular of the immoderate appetite of Catherine II, who swallowed complete collections in France, Holland and England. Among the treasures taken to Russia by the Romanov and which will be coming back briefly we will see works by Poussin, Chardin, Greuze, Wouverman, Metsu, drawings by Clérisseau, Natoire or Rubens
 Les Romanov, tsars et collectionneurs at the Pinacothèque, from 26 January to 29 May 2011.

Impressionists along the Seine

RUEIL-MALMAISON- As we know the Seine and the Impressionists knitted very privileged relations. This link manifests itself in all its splendour in Rouen. Monet, Pissarro, Sisley resided there, sometimes for long periods. But the exhibition wishes most of all to remind us that next to those world-known masters, there was a whole school of brave painters, who all went through the filter of Impressionism and through the city with «one hundred church bells». Aside from Albert Lebourg or Charles Angrand, who has a clientele of amateurs, most of them are now forgotten. Who remembers Charles Frechon, Joseph Delattre, Henri Vignet, de Maurice Louvrier, who relentlessly studied churches, bridges, the embankments, the reflections in the water and the little streets in the old town? Through some one hundred paintings on loan from local museums and private collections, they pop up again before going back to oblivion
 Les peintres impressionnistes et post-impressionnistes de lécole de Rouen at the Atelier Grognard, from 21 January to 18 April 2011.

 After being shown at the Centre Pompidou, Mexican artist Gabriel Orozco has just landed at the Tate Modern in London. From 19 January to 25 April 2011.

 Artist Florentina Pakosta (born in 1933) is the subject of a retrospective at the Leopold Museum in Vienna. From 21 January to 18 April 2011.

 The diversity of the Tapisserie catalane, de Picasso à Grau-Garriga is enhanced at the musée Jean-Lurçat, in Angers. From 20 January to 29 May 2011.

France in black and white

PARIS - While Drouot seems to have definitely lost the battle for the average «ticket» (under 1000  compared to 25 000  at Christies Paris and 50 000  at Sothebys Paris), the nearly 7000 daily visitors are quite content with this godsend of inexpensive lots. Postcards are one of the items greatly appreciated by modest collectors who rarely have access to the greater auctioneers. Here we have a large, 2-day auction of 460 lots. It will include a game of «boules», factory exteriors, a bear tamer from the Ariège, markets of the Aveyron, Sauternes expeditions in 1903, French train stations, stereoscopic views, morille-mushroom picking under pine trees, iron scrap fairs and the Seine overflowing While the value of the lots is minimum, the value of the images is unique: this is a rural and manual version of France long-gone that reappears. A real, illustrated history class, lustred by the many hands that have touched them.
Cartes postales at Richelieu-Drouot (SVV Morand) on 26 and 27 January 2011.

PARIS  He is often spoken about as of a conceptual artist. More than conceptual, Claude Rutault (born in 1941) seems to be a Maximalist. His famous definition/method 1 from 1973 is proof of this as he announces the main content of his work :«a canvas pulled over a frame, painted in the same color as the wall on which it will hang. All the formats available in the shops may be used, whether they are rectangular, square, round or oval.» This is the aesthetic premise on which theatrical settings were added, reflecting the way the art market functions  auctions, transfer to collectors. This exhibition is enigmatic: how did Rutault «land» at Perrotins, the wonder-boy of more fashionable values (Murakami, Cattelan, Veilhan)? This is a long story that honors the business: young Perrotin had already invited Rutault at the end of the 1980s, to exhibit his work or to put his archives into data-processing. He did not succeed in getting him. It took over twenty years of stubbornness on his part to set up this exhibition-suicide: the very last one?
 Claude Rutault is exhibited at the galerie Emmanuel Perrotin (76 rue de Turenne, 75003) until 12 February 2011.

Desportes, the love of Nature

The profile of a fawn, the massacre of a stag, the killing of a deer, hunting dogs from the Grand Dauphins pack, self-portrait as a hunter  We have all understood by the list of the titles: François Desportes (1661-1743) a contemporary of François de Troy and of Watteau, was an animal painter and above all a hunting painter. That is what posterity recalls about him, as well as the fact that he was an excellent drawer of dogs and cats. What we see in this monograph and in the catalogue raisonné, begun by Georges de Lastic and finished by Pierre Jacky, is the other aspect of this academic artist, who rubbed elbows with cosmopolitan Europe during the two yeas he spent at the court of Poland, under the reign of Jean III Sobieski, then protected by Louis XIV and Louis XV. Was also a remarkable botanist, a virtuoso of still lives and a brilliant inventor of «tropical» paintings in the same vein as Frans Post and Albert Eckhout, which makes him an unexpected forerunner of Douanier Rousseau.
 Desportes by Georges de Lastic et Pierre Jacky, published by Monelle Hayot, 2010, 328 p., 75 . Desportes, catalogue raisonné, 2010, 320 p., 237,50 .

The VIP Art Fair, a new concept of a dematerialized but elitist fair, will be held from 20 to 27 January 2010, only over internet and after registration, in the presence of the greatest international art dealers.

BRUSSELS- The 56th BRAFA, an international antiques fair, will bring together nearly 130 exhibitors from 21 to 30 January 2011.

PARIS - After 4 years of being restored, the Northern tower of the church of Saint Sulpice was inaugurated on 16 January 2011.