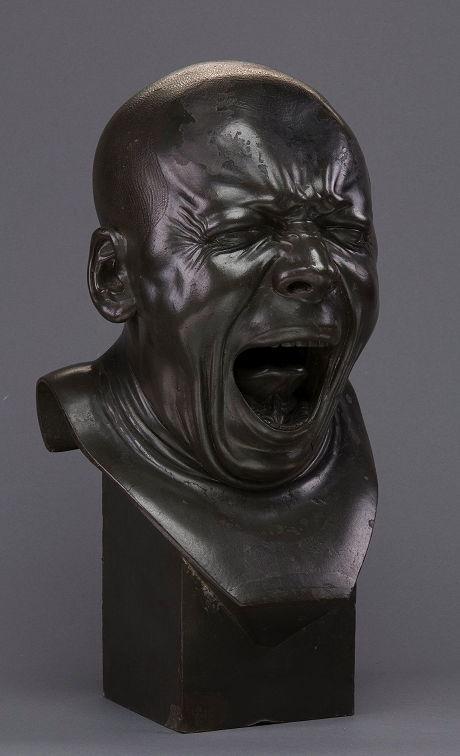 PARIS - Tutankhamen can rest calmly (especially since his tomb will be closed to the general public from now on). His record will never be beaten. The 1.2 million visitors who visited the exhibition dedicated to the Pharaoh in 1967 in Paris, in the midst of the saving of Abou Simbel, have not been equalled by Monets fans. Not even with the renewal of the adventure experienced last year with «Picasso and the great masters», i.e. the final rush with the opening of the museum around the clock  On Monday 24 January, at 6 AM, in the rain, wind and cold (4°C), the author of these lines faced a 4-hour long queue only his press card could save him from. Once inside, even elbow nudging did not save one from the cacophony of simultaneously lit audio-guides. The thaw at Vétheuil could only be seen from far. In the rooms dedicated to the hay stacks or to Venice, 60 aesthetics avidly monopolized five or six paintings. As I finally walked out I had to wait half an hour to buy the catalogue seemed like mere trivia. Monet, what sacrifices one can commit for you! Though he did not beat the Niles champion, Monet has nothing to be ashamed of, as the champion of Impressionism attracted 913 000 visitors in four months, which will allow him to easily control the international hit parades during 2011.
 The Monet retrospective at the Grand Palais closed on 24 January 2011.

HURRY UP! LAST DAYS, UNTIL 30 JANUARY... DO NOT MISS... ANCIENT MEDICINE, FROM THE BODY TO THE STARS; the art of healing through the centuries, between clinical observations and symbolic representations at the FONDATION MARTIN BODMER in COLOGNY. Read the article in Art-of-the-Day

AND UNTIL 31 JANUARY... KAZAKHSTAN: MEN, ANIMALS AND GODS OF THE STEPPE; 130 exceptional pieces, the first major exhibition on a culture of Nomadic horsemen at the MUSÉE GUIMET in PARIS. Read the article in Art-of-the-Day

LAUSANNE  In 1898, a storm breaks out in Spain, as the Philippines and Cuba secede and the country loses its Empire. A generation of artists and writers, baptized the «generation of 98», turned these events into the feeding ground for modernity that paved the road to the following generation, the one of 1929, with Dalí and García Lorca among others. The Hermitage foundation studies the artistic panorama in Madrid and the provinces around this decisive moment that closed the XIXth century. Picassos genius is already brewing but the great artist of the moment is Sorolla, who reigned from his majestic home-workshop in Madrid (transformed into a charming museum), where he produced paintings that evoke the sea side in a luminous Impressionism. There was also a strong battalion of caustic Catalans, among them Mir, Rusiñol and Casas, who would be the pillars of the famous Els Quatre Gats cabaret in Barcelona. Anglada, Regollos and Zuloaga complete a group that is hardly known out of the peninsula.
 El Modernismo 1880-1918 at the Fondation de lHermitage from 28 January to 29 May 2011.

Messerschmidt, an encyclopedia of faces

PARIS  For years his heads of expressions have delighted rare connoisseurs, who often felt they were members of a secret club. And, after all, who really knew Messerschmidt (1736-1783), the Bavarian portrait artist so appreciated in the Viennese court, but which also banished him given his unpredictable character? To this date one only saw his faces distorted by rage, laughter or pain in the pages of refined and confidential magazines such as FMR. Messerschmidt is on the way to be consecrated: his «character heads» that anticipate the phrenologist theories, those of Lavater and Beccaria, are landing at the Louvre! Some thirty busts, in alabaster or in metal, are presented, expressing an array of feelings and afflictions. One question remains, which his growing fame could help us answer: how many heads did Messerschmidt sculpt?
 Franz Xaver Messerschmidt at the Musée du Louvre, from 28 January to 25 April 2011. Catalogue Louvre/Officina Libraria, 2011, 224 p., 39 .

In the whirlwind of the Vorticists

VENICE  The March foundation recently honored the founder of the movement in Madrid. Now it is time to put into perspective the whole group that shook the British artistic scene in the first two decades of the XXth century. At the head of the movement there was Lewis, the polymorphic creator, who surfed from drawing to painting, to writing, theatre and politics. But we must not neglect Jacob Epstein or Henri Gaudier-Brzeska, the young Franco-Polish sculptor who disappeared during World War I (he too was recently exhibited at the centre Pompidou in Paris). Neighbors of the Italian Futurist artists, the Vorticists wished to be part of the whirlwind of modern life (it is the precise meaning of the word «vortex» in English). In the footsteps of Marinetti and his consorts, they were inspired by speed and mechanics to create an art form that was urgent, geometric and essentially abstract.
 I Vorticisti: artisti ribelli a New York e Londra, 1914-1918 at the Peggy Guggenheim Foundation, from 29 January to 15 May 2011. Exhibition presented at the Tate Britain from 14 June to 4 September 2011.

 Les Insolites at the Centre national du costume de scène (National stage costume centre) in Moulins shows how scenographers use the most unexpected materials  rubber, metal, vegetables  to create unusual costumes. From 28 January to 15 May 2011.

 At Sète, the Paul-Valéry museum presents Louis Valtat, an unfortunately ill-known colorist, contemporary of Bonnard and Matisse. From 28 January to 7 May 2011.

 In Vienna, the Albertina presents one of the great names in Pop art, Roy Lichtenstein, in black and white. From 28 January to 15 May 2011.

To the unknown artist

PARIS  At Drouot we regularly see the whole contents of an artists studio. When the painter is unknown, tens of paintings are sold for a handful of   If the artist is slightly known his rate reflect it. The Ader house has become a specialist, among others, of these re-evaluations. These last years we saw the Argentine artist Eduardo Jonquières or the Canadian Fernand Leduc. The latter jumped, in particular, from estimates at 1000 or 2000  at auctions to more than 50 000 . This type of surge is rare and we doubt it will happen with the candidates this week: Paul Mantes (1920-2004), a pale copyist of Chirico, Delvaux and Tanguy, or Pierre Van Poucke, influenced by Matisse and Picasso, who was an active member of the Salon des Indépendants for decades. Regardless, we will after all continue the research at Massols where the discreet landscape artist Pierre Edmond Péradon (1893-1981) will be up for sale: curious buyers, always in search of rediscoveries, know the do not come up often
 Ventes Mantes et Van Poucke at Richelieu-Drouot (Ader SVV) on 28 January 2011.
 Ateliers dartistes at Richelieu-Drouot (Massol SVV) on 29 January 2011.

Meese, the trouble-maker from Berlin

PARIS  His canvases drip with running paint, squirts and strange secretions. His sculptures are true baroque mixtures, full of growths, introduced objects, patched up dolls akin to golden frames, the whole thing sliced through with graffiti. Jonathan Meese does not like what is clean and tidy. His art has something in common with a sort of tropical vitality, and expresses itself in as may directions as possible: painting, sculpture, installations, performances, videos or even theatre or opera settings. «One cannot learn art, one cannot teach art» this provocateur claims, wearing just like Hermann Nitsch, a long prophets beard. He was born in Tokyo in 1970, has exhibited in New York and London, lives in Berlin and thus gives a very personal vision of globalization by accumulating, similar to debris, teenager idols, fascist symbols and consumer objects.
 The exhibition St Neutralité will be held at the galerie Daniel Templon (30 rue Beaubourg, 75003 Paris), until 8 February 2011.

The cover is very enticing: a breast, though not the one of the Belle Otero -Maria Felix (that one is immortalized in the cupolas of the Negresco hotel in Nice), with a very visible nipple. But it is not a licentious book, simply a summary on Sèvres porcelain! This lovely feminine attribute is rightly present since it was a commission by Marie-Antoinette to be a luxury bowl in her dairy in Rambouillet In the book the bowl is side by side with the most remarkable pieces produced by the Sèvres manufacture at the moment it unveiled the secret of hard porcelain (1769). These include the legendary Grand Vase, 2 meters tall, the services for the Russian Tsars, the decorations dedicated to great men or to Buffons birds. While the book includes a specialized inventory (the list of all the artisans in Sèvres at the time), it is meant for a wider public it wishes to help understand the iconography, to make the difference between hard and soft-paste porcelain, and reproduces the letters of the competitors at the time (Wedgwood) or of Jacques Garcia, the current pope of decoration à la française.
Sèvres sous Louis XVI, by John Whitehead, Courtes et Longues publishing house, 2010, 146 p., 45 .

 For a wide choice of books on ceramics, peruse the website of Librairie de la Céramique

BOLOGNA- The modern and contemporary art fair, Arte Fiera, will be held from 28 to 31 January 2011.

LAUSANNE - The Chaplin Photographic Archive, consisting of 10,000 photographs, has been entrusted to the Musée de l'Elysée.

PARIS - For the third consecutive year, the Louvre museum welcomed 8.5 million visitors in 2010, of which 7.8 million went to the permanent collections, the highest figure ever reached.-

PARIS  The building permit for the Fondation LVMH, a building designed by Frank Gehry that was to stand in the bois de Boulogne, has been cancelled by the tribunal administrative of Paris.

RIOM - The musée Mandet reopened on 22 January 2011 after one year of works, with a new department dedicated to contemporary decorative art, pedagogic spaces for the younger public, a reception area with a boutique and a working library for researchers.