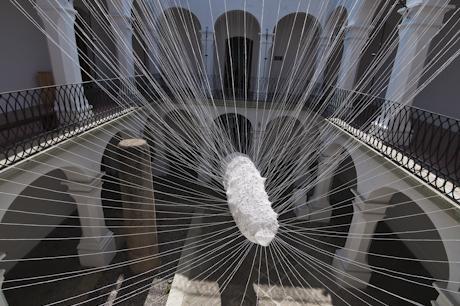 Roasted grasshoppers (chapulines), Malcolm Lowrys beloved mezcal, the social unrest: Oaxaca, one of the most beautiful cities in Latin America, bases its fame on a series of clichés. The year of Mexico, to open soon in France  and which the arguments on the Cassez affair seem to have definitely buried -, could have shown that the country is not limited to being the conservatory of ancient civilizations. Oaxaca is one example among many others. It was the stronghold of the Zapotec culture, with the city of Monte Alban, later inhabited by the Mixteca goldsmiths, it is also a capital of modern and contemporary art. The city of Rufino Tamayo (who will be celebrated as of 29 September at the Petit-Palais in Paris) has undergone a remarkable transformation this last decade, under the impulse of Francisco Toledo, the most famous contemporary Mexican artist. It now hosts several museums of contemporary art with funny acronyms (Maco, Mupo, Iago, aside from the Alvarez-Bravo foundation), galleries, collective presentations by young artists and graffiti artists. Event the botanical garden is the work of contemporary creators, led by Luis Zarate. Oaxaca meets the challenge of showing another aspect of Mexico, far from the image limited to its folklore, its mariachis, its embroidered dresses, its colonial style. Now it has to be known

The website of the Maco(Museo de arte contemporáneo de Oaxaca)

SAINT-ROMAIN-EN-GAL - The Musée gallo-romain launches the year of Mexico in France with an exhibition on lesser-known pre-Hispanic cultures from the Caribbean coast, around Veracruz and the site of El Tajin. With some 200 objects that cover the first millennium, the retrospective presents themes that are «natural hits» such as the ball game (a true local passion), or the iconography of the jaguar. But it also allows to show that the iconography of pre-Colombian civilizations was not systematically severe and blood-thirsty for sacrifices: the smiling figurines, with headdresses decorated with frets, are an original specificity.
 Les cultures antiques de Veracruz at the Musée gallo-romain in Saint-Romain-en-Gal, from 18 February to 28 August 2011.

Matta, a Chilean version of Surrealism

VALENCE (Spain) - Chile is known for its poets  Pablo Neruda or Gabriela Mistral. It also gave the XXth century a great surrealist artist: Roberto Matta, whose centennial is celebrated this year. Legend has it that after meeting García Lorca and Dali in Madrid, he was introduced to Breton. He related the event in a very colorful manner: «They told me «You are surrealist!». I did not even know what that meant». But the rest of his career would show that he was in total harmony with the researchers of the movement, even though Breton ended up by excluding him from it, like with so many other fellow companions. The exhibition encludes works from all periods, from the most expensive (the oil paintings from the forties, his New-York period) up to his drawings made in Tarquinia, in the Etruscan region, on the eve of his demise in 2002.
 Matta at the IVAM, from 15 February to 1st May 2011.

VIENNA  Next to Frida Kahlo or Basquiat, he is one of the mythic artistic figures of the XXth century, both by his art as by the intensity of his short life. Indeed, Egon Schiele died at the age of 28, at the end of WW I, from the Spanish flu. This disciple of Klimts left us troubling nudes, landscapes and obviously, portraits and self-portraits. This is the aspect of his work that is studied at the Belvedere through some one hundred drawings and paintings, in which he appears next to the women who counted in his life (such as Edith Schiele) or the Viennese high society of his time (such as the editor Eduard Kosmack or actor Paris Gutersloh). He dissects himself and his models with one pity-less line, in an intense, chromatic palette.
 Egon Schiele at the Belvedere, from 17 February to 13 June 2011.

 BRESCIA - The museum of Santa Giulia hosts a very complete Matisse retrospective, including 150 works from different periods in the artists life. Until 12 June 2011.

 BILBAO  The Guggenheim museum looks into the notions of Chaos and classicism in European painting in the period between the two wars. From 22 February to 15 May 2011

 LONDON  After its presentation at the Metropolitan Museum in New York, the Jan Gossaert retrospective makes a stopover in Europe at the National Gallery. From 23 February to 30 May 2011.

The money of Cesar and Charles V

PARIS  Does the Euro seem desperately boring and standardized to you? Maybe you find the badly trimmed and asymmetric old coins embody the gold numismatic age with their always changing personality that give an original approach to history? Drouot continues to offer a few annual sales of ancient coins, with a wide array of prices. During the sale on 22 February 2011, you may hesitate between the gold ecu from François Ist (200 , from a treasure inventoried in 2006), a ducat from Charles V (1000 ), a denarus with an elephant from Julius Cesar (200 ), tetradrachmae from ancient Greece, staters, shekels from Phoenicia, gros and gold louis, up to the Iranian tomans from the XIXth century. The aureus of Galerius Maximian (lot 49) could reach the highest bid, at over 5000 .
 Monnaies antiques et modernes at Richelieu-Drouot on 22 February 2011 (Fraysse SVV).

He is one of the darlings of the museum of Fine Arts in Brussels. This polyvalent creator was a curator there (in particular for the Brussels-Beijing in 2009). He is back, in his artist identity, invited by the museum to show some of his main series. The most important aspect of Tuymans art (born in 1958 in Antwerp) is obviously his attachment to figurative tradition and his tendency to document the main subjects of the last century and our time  the Shoah, decolonisation, 9/11 through portraits, group scenes and landscapes. Tuymans went through a «video» period in the beginning of the 80s, but today he is back to painting, the oldest media, which he uses to decrypt, in his own manner, sometimes the most recent news.
 The Palais des Beaux-Arts in Brussels dedicates a retrospective to Luc Tuymans from 18 February to 8 May 2011.

All of Gossaert in 4 kilos

The exhibition on Gossaert, mentioned earlier, is accompanied by a big catalogue that can be used as an excellent language manual: though the essays are translated to French, the cards dedicated to each work of art have been indeed left in English. Real admirers shall persevere! The erotic dimension of the Flemish master (1478-1532) and his taste for mythology are obviously dealt with, but the specialists go even further, by dedicating for example a fascinating text (written by Stephanie Schrader) to cultural diplomacy. In order to defend the interests of the Netherlands (and have bishops named without the endorsement of the Holy-Siege), the ambassador to Rome, Philippe de Bourgogne, connived intelligently. He had Gossaert make marble copies of the antiques kept at the Vatican, thus arousing the friendship of Pope Julius II and pushing his own matters further forward than through a risky wrestle. Our current political leaders could draw some inspiration from the models of the Renaissance
 La Renaissance de Jan Gossaert, lhomme, le mythe et la sensualité, directed by Maryan Aisworth, Fonds Mercator/Actes Sud, 2010, 484 p., 99 .

LONDON  A Portrait of Paul Eluard painted by Dali in 1929 was sold for 12 million £ at Sothebys on 10 February 2011, thus becoming the artists most expensive work in a public auction.

LONDON - The 7th British Art Show, dedicated every 5 years to British contemporary art, is held at the Hayward Gallery, from 16 February to 17 April 2011.

LOS ANGELES  The Getty Trust and the LACMA (Los Angeles County Museum of Art) have bought a small ensemble of some 12 000 negatives by photographer Robert Mapplethorpe, from the foundation that carries his name.

MADRID  The Art Madrid and Just Mad contemporary art fairs will be held from 17 to 20 February 2011.

PARIS  A team of international researchers, including the French CNRS, have found the cause for the progressive tarnishing of Van Goghs paintings: a reaction to the ultra-violet rays that transform the bright chromatic yellow into a sad brown.

PARIS Marie-Antoinettes milk jug for the Laiterie de Rambouillet was sold for  1.1 million on 11 February 2011 at Drouot-Richelieu (Aguttes SVV).