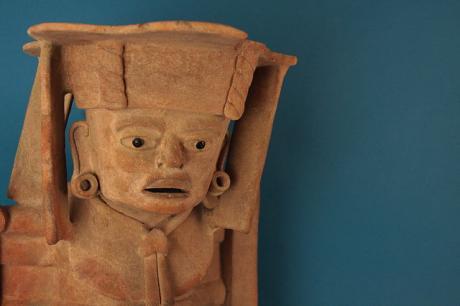 «So, together with President Calderón, we did not wish to let the plate tectonics bring us together at the rhythm of a few millimetres per year. We wished to upset old habits, dust off old speeches, accelerate the « rapprochements » in order to reach a real strategic partnership.». These booming words, pronounced by a French president on 9 March 2009, in Mexico Followed by an exciting announcement: « The invitation, dear Felipe, which I have just extended to you for a Year of Mexico in France, will not disappoint you». Not disappoint? That remains to be seen  The Year of Mexico in France has just run aground on a debatable pitfall, the Cassez affair, a judicial case that has become a matter of State. 350 events that included actors, musicians, visual artists, writers, major works of national heritage and contemporary creations: they have all been sacrificed in the name of a dubious combat, started off to a bad start, and which could have had a greater chance in succeeding had it been discreet. What has happened to French diplomacy? «We return to France with the feeling of having friends here, and more than friends, of having brothers with whom we share the same ambition, the same values, the same convictions.»My God, how quickly speeches grow old

EXCLUSIVE PORTFOLIO: Veracruz, the exhibition you will never see
In order not to be completely frustrated, art-of-the-day.info offers you the possibility of seeing a unique portfolio: the most beautiful pieces of the ancient cultures of Veracruz, which should have been shown at the Gallo-Roman museum of Saint-Romain-en-Gal. This superb, abortive exhibition which was dismounted as soon as it was mounted will at least have a brief, digital existence (16 images, captions in French).

Portrait of Picasso as a young Parisian

AMSTERDAM  In 1900, Picasso was 19 years old and he took his first trip to Paris. The young Catalan immigrant avidly absorbed all that the French capital could offer as artistic stimulants, from Toulouse-Lautrec to Gauguin, from Matisse to Rodin. The following year the suicide of his friend Casagemas gave birth to his blue period and his paintings in which one could read the distress of small people. In 1904, he settled in the Bateau Lavoir, which would become the pole of attraction of the artistic community of Montmartre, with Soffici, Modigliani or Van Dongen. In 1907, he set the bases for Cubism with his Demoiselles dAvignon. With works brought from great museums (the Phillips Collection, the Guggenheim, the Kimbell, etc) and from private collections, the Van Gogh museum reviews this very fertile period that would mark all modern art. It ended at the same time Montmartre lost its pre-eminence to Montparnasse and, when the North-South metro line opened
 Picasso in Paris, 1900-1907, at the Van Gogh museum, from 18 February to 29 May 2011.

Thrones from here and elsewhere

VERSAILLES  A throne is not only the armchair covered with red velveteen on which the Bourbons sat In any case it is what this exhibition shows us, throughout the various rooms it fills in the castle of Versailles, reminding us that the concept also includes a platform and a canopy, floating over the representative of the authority. Aside some testimonies from the French Ancien Régime (many were destroyed during the French Revolution, the only surviving throne of Louis XVI was at the French embassy in London), we will see original mobile chairs of the Papacy (the portantina, the sedia gestatoria) and chairs from other times and other cultures: palanquins, howdahs, stools of the Tainos, of the Incas, of the Bamoun from Cameroun, up to the Republican furniture used for the 14th of July parade. The main object of the ensemble, in any case the richest piece in historic reminiscences, is Dagoberts curule chair, a beautiful folding object in bronze. Refined and mobile, a real lesson in design that has survived over more than one thousand years
 Trônes en majesté at the château of Versailles from 1st March to 19 June 2011.

The marriage between photography and sculpture

ZURICH  The invention of photography not only gave birth to a new form of creation, it also allowed to document the evolution of other visual arts. Sculpture, a science of relief, benefited from it in particular. The exhibition at the Kunsthaus shows a century of research and documentation immortalized on film. While most of the time it is a question of leaving a trace of the work of art, the photographer can sometimes be capable of magnifying it, such as Steichen did for Rodins Balzac. This was also the case for the Surrealists and the Dadaists who made statues «speak» by staging them (Man Ray with African masks, Baargeld with the Venus of Milo). Over three hundred photos by anonymous amateurs or famous photographers (Atget, Friedlander) show that sculpture was never the same after the arrival of the set image
 Photosculpture at the Kunsthaus Zurich from 25 February to 15 May 2011.

LONDON  Under the title Watercolour, the Tate Britain dedicates an ambitious exhibition to the discipline of watercolors. From 16 February to 21 August 2011.

MADRID  After showing at Ferrara, Chardin, the master of still lives in the XVIIIth century, arrives at the Prado. From 1st March to 29 May 2011.

MILANO  A sure value for international exhibitions, Arcimboldo, the master of fruit and vegetables, is celebrated at the Palazzo Reale. From 10 February to 22 May 2011.

We are used to seeing interesting auctions in Lyon linked to gastronomy. This one is in Paris. After a few appetizers consisting in almanacs and renowned compendia (LEcuyer tranchant, La Physiologie du goût by Brillat-Savarin in a 1854 edition, La Cuisine classique by Dubois and Bernard, an original edition of the Manuel des amphitryons by Grimod de la Reynière), there will be a series of engravings and paintings of banquets, binges, markets, from Metsu up to the observers of the Halles in the XXth century. One lot deserves a separate introduction: N° 79, which brings together the whole library of the Charreton spouses, the untiring converts of good cooking on television or at the Salon des arts ménagers (Fair of home economics). The bare number of 3400 volumes published over three centuries is almost an invitation to continue preaching this belief
 Autour de la gastronomie, on 2 March 2011 at Drouot-Richelieu (SVV Guillaume Le Floch).

PARIS  The art of collage is not dead. We knew Prévert (we can check this at the exhibition at the Maison européenne de la photographie) and the Surrealists were very fond of it but we had doubts about it being very vital in our day. Here we have a contemporary interpreter, remarked by the juries of the Pinchuk prize (Future Generation Art Prize) and already exhibited at the Macro in Rome. Nico Vascellari extracts his first premiere from the multicolored pages of magazines of which he takes out the monochrome zones that he then recomposes as faceless, abstract characters, reminding us in spite of ourselves of Ingres (la Baigneuse de Valpinçon) or of Dalí (Voltaire disparaît). Very much in phase with his time, Vascellari sublimates his collages in multimedia installations. The one presented at the galerie Bugada & Cargnel combines a bronze monolith the reproduction of a mountain summit -, projections and a sound background.
 Nico Vascellari is presented at the galerie Bugada & Cargnel until 19 March 2011.

Certain lives are more exciting than those of fiction characters, so why run the risk of romanticizing them? The combination of genres, quite in vogue today, is indicated on the cover: «novel». Yet, most of the facts narrated in this book seem to be taken from reality, in particular the identity and facts attributed to the hero. Edward James was a wealthy British heir, a friend and patron of Dalís, who rubbed elbows with the Parisian avant-garde of the thirties  Balanchines Ballets 33, Coco Chanel, Georges Auric  before developing a passion for Mexico where, similar to a delirious character of Conrads, he decided to build a stone house in the jungle. With the help of local carpenters and foremen, near Xilitla, where the delicious crawfish are bountiful, he built his dream over many decades. A few elementary errors in the transcription could have been avoided («jeffe» in lieu of «jefe», «inglès» in lieu of «inglés», «benvenudo» in lieu of «bienvenido») but the slice of life of the old adventurer (who died in 1984) remains very enticing
 Edward dans sa jungle (Edward in his jungle) by Anne Vallaeys, Fayard, 2010, 336 p., 19 .

MADRID  The modern and contemporary art fairs of ARCO and Art Madrid, which just closed their doors, respectively announced attendance at 150 000 and 40 000 visitors and sales that have gone up in comparison to last year. The Reina Sofía museum is number one as investor by buying 680 000  worth of works of art at ARCO.

PARIS  To replace the exhibition Masques de jade mayas, cancelled like many other events of the Year of Mexico in France, the Pinacothèque de Paris will present, from 18 March to 21 August, Voyage imaginaire dHugo Pratt ( Hugo Pratts imaginary trip)..

PARIS  Circulations, the festival of young European photography, to be held from 19 February to 20 March at the parc de Bagatelle, will present 42 creators from all over the continent.

PARIS Sothebys will dedicate a retrospective exhibition to Serge Gainsbourg, for the 20th anniversary of his death, presenting 40 photographs taken by different photographers, from 28 February to 9 March 2011.