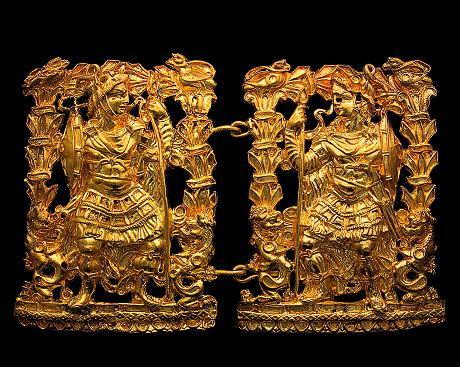 These last few weeks current events have offered us a flow of images of the revolution, sometimes surprisingly pacific (Tunisia) sometimes savagely brutal (Libya). While our concern for the artistic heritage obviously is clearly set back in the second row, it cannot be completely ignored. The Museum of archaeology of Cairo was the victim of a curiously targeted type of vandalism (see the article by Jean-Pierre Corteggiani in Le Monde, 24 February), but everyone is concerned in particular with Libya: what is going to happen to the collections of the museum of Tripoli or those of the museums of the major sites of Sabratha, Leptis Magna or Cyrene? A beautiful book by Claude Sintes and Gilles Mermet was published a few months ago and reviewed in this same column, and it focused on the extraordinary wealth of the Ancient Libyan heritage. Of course none of these questions are new and in order to face these recurrent situations and the destruction, looting and illegal trade they entail, in a useful manner, nothing can be better than a retrospective examination. That is precisely what the British Museum has done, a few years after the musée Guimet, by dedicating a retrospective of diggings from Afghanistan and its treasures saved from decades of violence.
 Afghanistan, the surviving treasures at the British Museum, from 3 March to 3 June 2011.

THE HAGUE  Jan Steen (1626-1679) has the reputation of being a jolly fellow, with his colourful scenes of inns, Pantagruelian feasts, medicine men in fairs, slightly wild young ladies  The Mauritshuis has no intention of by-passing this aspect of one of the best known artists of Dutch painting, of which it has fifteen works. But by focusing this exhibition on a very recent acquisition, it shows that Steens art can not be so easily reduced. The new history painting the museum is very proud of (purchased through the patronage of BankGiro Lottery) is actually a Bible scene, Moses and Pharaohs crown in which the «guardroom» dimension is partially erased. This will bring back to life the history painter aspect of Steen ; but it will not suffice to erase an expression that is now part of common language «like a Jan Steen style interior», to describe a joyous and indescribable disorder.
 Jan Steen at the Mauritshuis from 3 March to 13 June 2011

MILANO  Will the Impressionists ever be out of fashion? As soon as an exhibition on Monet closes, one opens on Renoir  and if none of the tenors is on stage, one can always turn out a group retrospective. The Palazzo Reale suggests precisely that as it hosts a large American collection, that only travels by small parts, that of the Clark Institute of Williamstown, in Massachusetts. A couple with unlimited means (Robert Sterling Clark was one of the heirs of the Singer sewing machines), the Clarks settled in Paris at the end of the Belle Epoque, and had a collection that included some works of major importance. Over 70 paintings by Pissarro, Monet, Degas, Sisley, etc., as well as by contemporary artists such as Bougereau, Carolus-Duran or Gérôme (with the Snake charmer recently shown at the retrospective of the musée dOrsay) describe an early American sensitivity, comparable to that of the Barnes, Phillips and Mellon, who filled the museums of the New World and were the best propagators of the Impressionist glory
 Impressionisti, capolavori della collezione Clark (Impressionists, master pieces from the Clark collection) at Palazzo Reale, from 2 March to 19 June 2011.

Rome, the country side

PARIS  Following the Monet folly, the Grand Palais will be able to settle down. The exhibition dedicated to the Roman landscape in the XVIIth century will undoubtedly not attract such crowds  Yet the theme was in its time a real « crowd attracter» as one could hardly imagine today. Any modestly promising artist was expected to produce one in situ and any «important tourist» relatively wealthy was expected to buy one. The game of the offer and demand pushed artists to produce en masse works that were immediately recognizable and exchangeable on the major European markets. The exhibition deciphers the origins of this fashion, greatly due to «foreigners» such as Rubens, Bril, Poussin or Le Lorrain, but also to locals such as the Carracci family. These ideal views were meant to include architectural caprices in a natural setting that would maintain a certain savage aspect with its waterfalls, mountains or thick trees
 Nature et idéal : le paysage à Rome 1600-1650 (Nature and ideal: landscapes in Rome 1600-1650) at the Grand Palais, from 9 March to 6 June 2011. The exhibition will then be presented at the Prado from 28 June to 25 September 2011.

 GRENOBLE  With Marc Chagall et lavant-garde russe, the museum of Grenoble reviews an important moment of the XXth century, the fruit of the French Revolution. From 5 March to 13 June 2011.

 PARIS - The Bibliothèque nationale de France pays tribute to one of the pioneers of Egyptology, Emile Prisse dAvennes (1807-1879), to whom it owes in particular the presence in its collections of the famous papyrus from Prisse. From 1st March to 5 June 2011.

 ROME - The Maxxi doors are open wide for Michelangelo Pistoletto, one of the major names in Italian Arte povera. From 4 March to 15 August 2011.

Photos from the other side of the world

The choice of the lots is of course very subjective but it reflects quite well the change in poles of interest among great travelers in the XIXth century: Italy and Spain, too close, stepped aside to lead the way to place to North Africa, the Orient, Oceania and its tribes or Siberian Russia. The taste for architecture mingled with ethnology and voyeurism. The photos of th e times combine prostitutes from the Maghreb lying on animal furs, small taped up feet from China, steatopygic Venuses, a few maharajahs in grand costumes and a few tortures  hangings, persons condemned to the cang, up to a frightening hara-kiri immortalized by Kusakake Kimbei towards 1880 (lot 145) Major names Felice Beato, prince Roland Bonaparte, Lehnert & Landrock, Pierre Verger are included in the lot, the majority of which are estimated under one thousand Euros.
 Explorations photographiques 9 March 2011 at Richelieu-Drouot (SVV Yann Le Mouel).

Pierre Lamalatties portraits show us a human comedy taken from the daily life of the employment market, from the search for a job, from days spent at the office, from the professional rivalries and jealousies, from doubts on ones career. In his «report on man», the artist who presents himself as «a sort of irremissible failure», a «conventional painter», sketches our faults in a funny or cruel manner, according to the angle one chooses to look from. Each one of us can find his archetype, between the person obsessed with the sales and the «stereotype Frenchman» at the beach. The legends can only be associated to these precise drawings that remind us of Edward Lears or Pierre Desproges aphorisms. Romuald? «Ever since he is a fitness coach, he has built himself a philosophy that runs well. » Paulette? «At the Pines residence, she receives the hairdresser every two weeks. » Small slivers of lives
 Pierre Lamalattie is shown at the galerie Alain Blondel (128 rue Vieille-du-Temple, 75003 Paris), until 19 March 2011.

The file on Pierre Lamalattie in the Delarge, the dictionary of the modern and contemporary visual arts

A year at Drouot in pictures

The hôtel Drouot has heard more than too often that it has not been capable to adapt nor to follow the rhythm of Anglo-Saxon auction houses set up a decade ago on French soil  Indeed the average bid is modest but the variety of the goods put up for sale cannot be equaled: that is the basic argument of the Parisian auctioneers. This book in a way illustrates that belief. It is a census of the most beautiful sales of the past year, whether the records or exceptional collections. To reach the 413 million  the house made over twelve months, we can see side by side, the hand written copy of an Arab grammar book from 1120 (2 million ), a Joseph dresser (1.6 million ), a book of hours to be used by the diocese of Amiens (100 000 ) and an articulated Jean Dunand bracelet (17 000 ). From Russia to Africa, from the Antiquity to our day, from the minute (tact watch by Bréguet, 78 000 ) to the very large (a glass window with fourteen panels in cathedral glass, 69 000 , or a piece of the staircase of the Eiffel tower, 105 000 ), one cannot help thinking of the slogan of the former Samaritaine department store: one can find anything at Drouot
 Drouot, lart et les enchères 2010, Drouot Holding, 2010, 386 p., 65 

BARCELONA  The MACBA received a donation of the Miserachs archives and its 80 000 photos, an essential source of documentation on Spain in the XXth century

BORDEAUX  The exhibition dedicated to Diego Rivera, that was to open on 10 March 2011 at the musée des beaux-arts, has been canceled  a new victim of the sinking of the Year of Mexico in France.

NEW YORK - The Armory Show, the modern and contemporary art fair, will be held from 3 to 6 March 2011, with some one hundred international galleries.

PARIS  The Gaîté lyrique, the famous Parisian theatre inaugurated in 1862, reopened on 2 March 2011, transformed into an international centre for digital arts and different current music.

PARIS  The Paris Photo fair has announced its next edition will be held at the Grand Palais and not at the Carrousel du Louvre, and that it will be directed by a new commissioner, Julien Frydman, former head of the Magnum agency, who will replace Guillaume Piens.

PARIS-The Wallworks gallery, specialized in street art (4, rue Martel, 75010), is inaugurated as of 4 March 2011 with an exhibition dedicated to the graffiti artist Kongo.