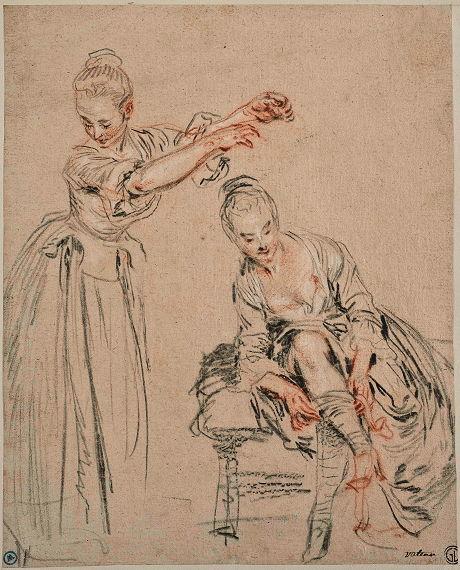 Women on the threshold of the museums

The Centre Pompidou had set the example in May 2003, when it presented a «feminist» exhibition of the national Modern Art museums collection. At the time the Brooklyn museum had also been in the limelight with its new space dedicated to the Sackler Center for Feminist Art. While 8 March will offer an opportunity to ay tribute to women in art (like the Thyssen-Bornemisza museum in Madrid and the opening of its exhibition Heroines), one can wonder what place women really have in cultural institutions. We can well remember the very « à propos » slogan of the Guerrilla Girls back in 1989: «Do women have to be naked to get into the Met. Museum? », reminding one and all that only 5 % of the artists exhibited in the great New York museum were women (but 85 % of the nudes represented women). In spite of all the initiatives and well-intended declarations, the situation does not really seem to evolve. A new study carried out by the Guerrilla Girls in 2004, fifteen years after the first one, showed the infamous statistic had still shrunk, down to 3 %. We await (patiently) for the next one

The exhibition Heroínas at the Thyssen-Bornemisza museum, from 8 March to 5 June 2011

The poster of the Guerilla Girls

The Sackler Center for Feminist Art of the Brooklyn Museum

BASEL  He stepped out of historys oblivion at the beginning of the XXth century, through research carried out by Daniel Burckhardt-Werthemann but many shady areas still remain. Who was Konrad Witz, whose work was only documented for a decade (circa 1434-1447) in Basel, one of the major towns involved in religious thinking at the time of the ecumenical council called for by the Church? The exhibition shown at the Kunstmuseum tries to help the research advance, in particular by bringing together the scattered fragments of his large altarpieces, peopled by very realist characters, of detailed architectures and mountains drawn like drapes. For this occasion, the nine elements of the Heilsspiegel altarpiece, designed for the church of Saint-Leonard and which now belong to the museum, have been restored, and they sit side by side with loans from Geneva, Dijon or Strasbourg.
 Konrad Witz at the Kunstmuseum, from 6 March to 3 July 2011.

ORLÉANS, RICHELIEU, TOURS - Gonzague, Este, della Rovere, Farnèse: over the last few years we have seen beautiful reconstitutions of these ancient collections of Italian Princes. Are appetite is wetted by a similar project dedicated to another exceptional collector: Cardinal Richelieu. It seems impossible to draw a list of all the art work the statesman gathered throughout his time: antiques acquired in Rome by his emissaries, paintings commissioned to his contemporaries (such as Nicolas Prévost) or bought on the market (the famous Studiolo of Isabella dEste at Ferrara), representations of battles to serve the glory of the State and his own. And other objects of art, tapestries and furniture fo rhis castle of Richelieu (designed by Jacques Lemercier, it was the largest in France before the construction of Versailles) The exhibition is distributed over three venues Orléans (the antiques), Tours (the interior decors) and Richelieu (the battles)  and gives a taste of the magnificence that surrounded the Cardinal. We can only regret the absence of a website that could federate these events (considered of national interest) and make the wealth of this fund, now scattered, more understandable. It makes one wonder what the sponsorship by IBM and Deloitte, mentioned in the press dossier, was for
 Richelieu à Richelieu from 12 March to 12 June at Orléans (musée des Beaux-Arts), Tours (musée des Beaux-Arts) and Richelieu (Musée municipal).

PARIS  A stain mars his career, his participation in the anti-Dreyfus campaign. This choice is at the least surprising, coming from an artist who plunged into the bohemian life with Rimbaud, with whom he shared an apartment) and who had the sensitivity of an anarchist at the time of the Commune. That put aside, it is difficult to synthesize Jean-Louis Forains long career (1852-1931) given its great variety: an Impressionist in his youth, a prolific illustrator of the press, an excellent lithographer, up to the grand finale, as a great Expressionist, at the age of 70, when he was a steady client in the jazz and tango bars of the Roaring Twenties. The exhibition at the Petit-Palais shows a lot  over 200 works of art  on the main themes of the city and the night. Forain was often at the Opéra and in cafés, he was an observer of whore houses and tribunals, and produced a wealthy and very personal encyclopedia of mores.
 Jean-Louis Forain, la Comédie parisienne at the Petit Palais from 10 March to 5 June 2011. The exhibition will then be presented at the Dixon Gallery and Gardens in Memphis (Tennessee) from 26 June to 9 October 2011.

 LONDON - Watteau drawings are the object of a retrospective at the Royal Academy of Arts. From 12 March to 5 June 2011.

 PARIS  Rossetti and Burne-Jones were contemporaries of the pioneers of photography. The Orsay museum covers their relations in Photographie préraphaélite. From 8 March to 29 May 2011.

 ZURICH - The Kunsthaus confronts a complex theme, the la vision dans luvre de Giacometti by bringing together over one hundred works. From 11 March to 22 May 2011.

PARIS - Marina Vlady was radiant as the « princesse de Clèves » (en 1961) with her braids and her sleeves in embroidered damask, young Jeanne Moreau in La Reine Margot (in 1954) in velvet and a cape, Danielle Darrieux in her long pleated crepe dress in LAffaire des poisons (1955) Or Michèle Morgan in her light green négligé in Le crime ne paie pas (1962)? Those of us who suffer from nostalgia will be able to take on their heroes role throughout this sale: the costumes used in these movies from the Pathé studios should be accessible for a few hundred Euros. Male interpreters are also present: the grey two-piece suit worn by Gérard Philipe in Le Joueur (1958) or the one in gabardine that suited Omar Sharif so well in Mayerling (1968) will inspire fetishists. The record sale is expected for the suit Edith Piaf wore in French Cancan (1955), that should sell fro more than one thousand Euros.
 Anciens stocks dun costumier at Richelieu-Drouot on 11 March 2011 (Ader SVV).

While he confesses to have a taste for the «decisive moment» Cartier-Bresson so cherished, Julien Taylor (born in 1976) marks his distance from it in the technique of his photographs, the product of complex arrangements. The authors scientific training and his taste for the Paris night life result in a very original work in which the multiplicity of the points of view (that illustrate the passage of time or different angles of one same action) succeed in combining into unique images, through the magic of touching them up with digital technique. Whether it is a birthday party taken from the ceiling, a bar at various hours of the night, the different models in a fashion parade, each time Taylor produces computer-generated images, in the two senses of the word: worked on with a computer and capable of summarizing a moving situation. Julien Taylor, who takes part in the Fetart festival, has just been awarded the Nicolas Feuillatte artist prize for 2011.

A countrys heritage is the old stones, but not only. There are the traditions, the mixing of cultures, cuisine and music When not included in Unescos national heritage and being a region stigmatized by decades of violence, how can Turkish Kurdistan have its riches known? That is the objective of this charming book that deals with the city of Diyarbakir, practically unknown to even the most cultivated public. It is located at the far-Eastern part of Turkey, on the banks of the Tigre, and has many assets that fascinated among others archaeologist Albert Gabriel. Its walls in andesite over 5 kilometres long, punctuated by 82 towers, are considered among the longest in the world and some parts go back to the time of the Hurriyet (3000 B.C.). A melting pot of Kurds, Christians, Jews, Armenians and Syrians, Diyarbakir once had the most beautiful movie theater in the Middle-East (the Dilan, with 1500 seats) and original traditions such as the custom of placing ones bed, during the summer nights, on the terraces. Threatened by the explosive growth of its population, its built heritage does not benefit from the same care as its neighbor Mardin, dear to the Aga Khan.
 Diyarbakir by Seyhmus Diken, Turquoise, 2010, 256 p., 20 

CAIRO  Zahi Hawass, who directed the department of Egyptian Antiquities for the last decade, announced on 6 March 2011 he would be resigning from his position as Minister for Antiquities. Ex-president Mubarak had named him to that position a few weeks before leaving power

KARLSRUHE - The contemporary art fair Art Karlsruhe will be held from 10 to 13 March 2011.

SINGAPORE  The 3rd Biennale of contemporary art of Singapore will be held from 13 March to 15 May 2011.

UNITED ARAB EMIRATES  The 6th Biennale of Contemporary Art of Sharjah will be held from 16 March to 16 May 2011.