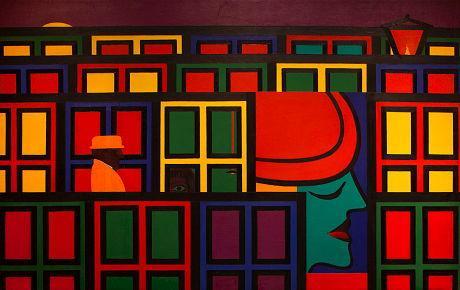 Tefaf, antiques are it

MAASTRICHT  In our ever changing world, some things remain the same: in spite of its barbaric name, the Tefaf the rendez-vous of antique dealers in Maastricht  is still considered the world cup in its field. The major dealers gather here, following a strict cooptation and the exams or vetting for the objects presented are said to be extremely tough, with its 29 different committees made up of 175 experts. A few pieces at astronomic prices give an idea to novices of the size of the event this year the prize will go to a Rembrandt estimated at more than 45 million Euros (Portrait of a man at Otto Naumanns). The 2011 edition, obviously darkened by the Japanese catastrophe, is a test for next years jubilee. Indeed, for its 25th edition in 2012, the fair will boast of its spectacular success, to have grown from a minor event, in 1988, to the status of world reference, hosting some 260 merchants and 75 000 visitors who gladly pay the sum of 55 Euros (including the catalogue) to enter
 Tefaf Maastricht, from 18 to 27 March 2011

An ode to orthodoxy

AMSTERDAM  After being mistreated throughout the XXth communist century, the Orthodox faith is back in force in Russia, forging new and sometimes uncomfortable links with nationalism and the search for roots and an identity (an obsession in other countries it seems as well ) The Amsterdam antenna of the Hermitage received from its parent venue a fine selection of the most grandiose production faith has put out, under a non-ambiguous title, «Splendor and glory». Among the 300 objects presented there are of course icons, some of which date back to the XIIIth century, one dedicated to Our Lady of Kazan, covered with studs and pendants by Fabergé, as well as frescoes, liturgical silver, Easter porcelain eggs, calices and tabernacles. Various fragments of iconostasis are also presented and cause us to admire the way the Church adapted to the needs of the times with the miniature iconostasis tzar Alexander I took with him when he occupied Paris in 1814
 Splendor and glory, art of the Russian orthodox church at the Hermitage in Amsterdam from 19 March to 16 September 2011.

BORDEAUX  The city of the new Minister of Foreign Affairs was deprived from its recently cancelled exhibition on Diego Rivera. So it is trying to console itself with another trans-oceanic retrospective. This one is dedicated to the African continent. Can we grasp an «African thinking» by making the invisible come out from these visual creations, and perpetuate it over one thousand years? That is the objective here and it is demonstrated with 200 objects from different periods (starting with a Soninke statue from the first century), grouped together in three large categories  masks, statues and fetishes. The opportunity was given by the reopening of rooms the museum dedicates to the XVIIIth century, when the relations between Bordeaux and Africa  mainly the traffic of slaves  represented a large part of local revenues.
 Arts dAfrique, voir linvisible at the musée dAquitaine from 22 March to 21 August 2011.

Redon, beyond the flowers

PARIS  Odilon Redon (1840-1916), master of Symbolism Spiders done in charcoal, a Black Pegasus or Chimera, characters absorbed with their eyes half-closed, on a troubled background, or observing the future in a cup Yet this is not the side of his art the market favors, his flower bouquets that are worth more strangely enough- in watercolors (at almost 3 million Euros) than in oil paint. This exhibition dedicated to him, the largest in Paris since 1956, means to cover all his career, from the Blacks of his beginnings to the proto-surrealist tendencies towards the end. There are many prints (printing was one of his favorite disciplines), and his strange Livre de raison (Book of reason), in which he wrote the titles of each of his works. Loans from the Mobilier national show his activity in the field of decorative arts while the close ties with his friend Robert de Domecy (with whom he travelled in Italy and whose wife often posed for him) come back to life in the large mural decor of the castle of Domecy, presented in its entirety.
 Odilon Redon at the Grand Palais from 23 March to 20 June 2011. The exhibition will be shown at the musée Fabre, in Montpellier, from 7 July to 16 October 2011.

 PARIS  The retrospective Miró sculpteur, at the musée Maillol, dedicated to the artists activity in volume, will include important loans from the Maeght foundation. From 16 March to 31 July 2011.

 PARIS - Sous légide de Mars (Under the aegis of Mars) presents at the musée de lArmée a selection of the most beautiful European armor from the Renaissance, on loan from Torino, Dresden or Vienna. From 16 March to 25 June 2011.

The mystery of the Mezcala

PARIS  Who were the Mezcala? The mystery remains intact. This culture from the state of Guerrero, on the Mexican Pacific coast, left no monuments and therefore hardly attracted the interest of archaeologists. Only a few individuals, with somewhat picturesque itineraries, such as Scottish prospector William Niven, at the end of the XIXth century, or the geologist from Milano, and Schlumberger employee, Carlo Gay, as of the 1950s (he became the world expert) were interested in their sculpture. It dates back to 1000 B.C., and is older than the Olmeca culture, and can therefore claim to be the very first of the American continent. Its fortuitous analogies with art from the Cyclades same taste for minimalism and geometry  are striking. These very small pieces result from the patient polishing of pebbles, and represent a unique ensemble.
 Collection H. Law on 21 March 2011 at Richelieu-Drouot (Binoche et Giquello SVV).

LOOK AT THE WHOLE PORTFOLIO

This year she will celebrate the 50th anniversary of her first collective exhibition. And for half a century, Helena Almeida (née en 1934) has carried out research on the representation of which she is practically the only model, with rare regularity and unaware of fashions. By using photography, mirrors or windows she may cover with paint, sheets she folds and on which she lies, thread she uses to sew her mouth with or with which she ties herself to her husband (in her latest work), she actually questions communication, dialogue, the place of each one of us in space. This small, minimalist «family» enterprise (it is her husband who photographs her systematically), that upholds the ideal of a «performance», has a rather purified, essential, slow aspect to it, that separates it clearly from the frenzy of contemporary art, that increasingly depends on the notions of market and productivity
 Helena Almeida is shown at the galerie Filles du Calvaire (17 rue des Filles-du-Calvaire, 75003), from 18 March to 7 May 2011.

The monsters of Nature

In these times of world disasters and planetary wars, here is an original way of convening the horrific and the unknown which man seems to both fear and enjoy  These wild postcards, collected along the Eastern coast of the USA, are the result of tricks much older than Photoshop and their like. They show brave fishermen swallowed by trout, giant hares pulling carts, a valiant farmer in a sword fight with a grasshopper a head taller than him  Or pineapples large as a house, cobs of corn that need to be sliced with a saw, cucumbers too large to enter a train wagon, and even a mosquito picked up by a crane. This nightmare comes straight from the fertile imagination of the producers of tall-tale postcards, such as William H. Martin or Alfred Stanley Johnson, active between 1908 and 1913. These two inventors are well forgotten though their visions of an apocalypse seem to echo the very current spectrum of a nuclear cataclysm.
 Photomontages improbables by Alain Weill, published by Gourcuff-Gradenigo, 2011, 96 p., 19 

AREZZO  The 1st edition of the modern and contemporary art fair Artexpo Arezzo will be held from 17 to 21 March 2011.

NEW YORK  Asia Week 2011, to open on 17 March, presents a varied program of exhibitions and auctions, in different venues throughout the city.

NEW YORK  The AIPAD photography fair, grouping together nearly 70 merchants, will be held from 17 to 20 March 2011, at the Park Avenue Armory.

ROME  The Museo della Repubblica Romana e della Memoria Garibaldina (Museum of the Roman Republic and of the Garibaldi memory) will reopen on 17 March 2011, for the 150th anniversary of Italian Unity, at Porta San Pancrazio.