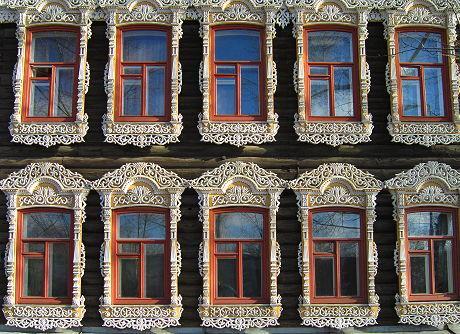 TOMSK  Siberia, The region of the spirit as writer Colin Thubron used to call it so nicely, is more than ever the object of all desires. Its immense dimensions make it the perfect deposit for nuclear scoria while its riches in wood, nickel, coal and in particular oil have motivated all sorts of investments. As in most cases, the patrimony is the last thing on everyones mind. The wooden houses, one of the most authentic expressions of local architecture, have trouble finding the proper protection. The Unesco had considered placing Tomsk on its miracle list just five years ago, but seems to have suspended its decision to the events of the past few years. Following the series of arson cases (nearly thirty houses and churches), perpetrated to clean up the area for profitable real estate projects, the older neighborhoods, like the one on the Tatarskaïa street, had trouble keeping their identity, hollowed by modern constructions. The resistance to the steamroller of speculation lies solely on civil activists such as historians, restorers, university professors, who defend with a few streamers and microphones, inch by inch, isbas that are sometimes 300 years old, in which lived the pioneers who set out to conquer the East. A few years ago we were all moved when the wooden churches in Norway had been vandalized by satanic sects. When will a tear be shed for far-away Siberia?

Link towards the action of the association for the defense of the wood patrimony of Tomsk (in Russian as well as many photographs, in particular of the most recent fire)

Boldini, painter of the beautiful people

COMO -In the series of Italian exhibitions aimed at high attendance, the Villa Olmo is a newcomer who has made itself a name with offers that are not very daring but are prepared with great professionalism. On the shores of lake Como, two steps from Villa dEste, one of the most famous palaces in Europe, and after Magritte, Klimt and Miro, the Villa presents Boldini. A painter of society at the end of the XIXth century, an Italian successfully transplanted in Paris, Boldini is back in fashion in the art market: recently he signed a spectacular sale (5.8 million $ on 4 November 2010 at Sothebys for Portrait of Giovinetta Errazurriz). His large works of aristocrats in evening clothes were the major figures of Europe at the eve of World War I. The beautiful Singer, Demidoff and Concha de Ossa ladies are in some ways the portrait of a careless civilization in front of the abyss. Boldinis work hid the work done in parallel by other Italian painters, shown here purposely. While there was a retrospective of Giuseppe de Nittiss work just recently at the Petit Palais in Paris, Vittorio Corcos and Federico Zandomeneghi still lack «visibility» outside of the peninsula.
 Boldini and the Belle Epoque at Villa Olmo, from 26 March to 24 July 2011.

LONDON - The Victoria & Albert Museum presents as usual a bountiful exhibition in which all the forms of art are put face to face  sculpture, drawing, painting, architecture and, obviously, decorative arts. This most recent one focuses on a deeply British movement, the «Aestheticism», which aimed at being, between the 1860s and the beginning of the XXth century, a reaction against the screed of Victorian conformism. The artists who participated in it have become icons, a status they owe to their strange biographies as well as to their creations. The curators have no scruples in examining very closely characters such as William Morris, Oscar Wilde or Dante Gabriel Rossetti, who unearthed his mistress coffin in order to recuperate a drawing he had given her as a last proof of his adoration for her. A taste for vegetable forms, the influence of antique Greece, an attraction for Japanese art: all these characteristics are found in the hundreds of objects presented, from the painted paper to the jewels, from the furniture to the clothes, even the eccentric interiors these «aesthetes» were so fond of.
 The Aesthetic Movement at the Victoria & Albert Museum, from 2 April to 17 July 2011. The exhibition will be presented at the musée dOrsay in September 2011.

PARIS  It had almost been thirty years since Paris had dedicated a retrospective to this star of French painting, the author of Olympia or of Déjeuner sur lherbe (Lunch on the grass). This exhibition means to put certain certitudes into perspective, such as Manets realism and show all he owes to other influences - Romanticism, eroticism or religious art. Certain themes are looked at very closely: his relationship with Impressionism, with the Republican ideal, with «feminine» painting and Berthe Morisot or Eva Gonzalez. The exhibition of 1880, the Galerie de la vie moderne, is partially recreated at the end of the itinerary.
 Manet, inventeur du Moderne at the musée dOrsay, from 5 April to 3 July 2011.

 LYONS  In Le génie de lOrient (The genius of the Orient), the musée des Beaux-Arts shows how the fascination the intellectual elites had for the Orient was built in the XIXth and XXth centuries. From 2 April to 4 July 2011.

 PARIS  Jacques Kerchache was known for his love of primitive arts and for his role in the birth of the musée du Quai Branly. In Kerchache et le vaudou, the Fondation Cartier shows a fine selection of objects from his collection. From 5 April to 25 September 2011.

Weiller and his treasure chest

PARIS  Paul-Louis Weiller who died at the age of 100 in 1993, was quite an unusual man, going from aviation star, to industrialist (he was at the beginnings of the Snecma and Art France), was one of de Gaulles first companions, a member of the social elite (Greta Garbo had surnamed him Paul-Louis XIV), a lover of books and a philanthropist. The sale of his collection, combining major pieces of furniture from the French XVIIIth century, jades from China or Flemish paintings will take four full days to be scattered and will put the spot light on the Hôtel-Drouot like at the glorious time of André Breton sale. A member of the Académie des beaux-arts, commandant Weiller had a refined taste for books, as can be seen in the section of the sale dedicated to bibliophilism, with the numerous volumes of books of hours from the beginning of the XVIth century, in particular the one of Claude de France (estimated at 400 000 ) or an illuminated manuscript of the Chroniques by Froissart (circa 1415-20, estimated at 250 000 ). Letters by Louis XIV and Frederick the Great sit next to the document-holder that belonged to the marquise of Pompadour. Those who are interested in the evolution of the art market will note a particularly significant lot: N° 568, a letter from Napoleon to Josephine. Estimated at 45 000 , it is accompanied by the ticket of its former sale in an auction by Master Ader, during WWII, on 7 May 1940: 78 200 francs. Cocteaus love letters are unexpected as they are addressed to a woman, Nathalie Paley (6 000 ). One of them was even written on the back of the Paul-Louis Weillers wedding announcement. No one respects anything anymore
 Former Paul-Louis Weiller collection at (Gros et Delettrez SVV) from 5 to 8 April 2011 (books on 8 April). Exhibition from 2 to 5 April.

His paintings are realistic and well finished like the major history paintings of the past, with recognizable characters, dress and a frame. But the subjects he deals with are generally linked to violent situations and are often disturbing: the hero is not always on the forefront. Ophuis explores the turpitudes of our times  the concentration camps, the massacres in ex-Yugoslavia, the war in Palestine. If his images were photographs, they would hardly be allowed to be published, even if one adds the typical comment «can disturb certain sensitivities». One can see a rape scene in a concentration camp between prisoners, the ultimate decline of these same prisoners, the return on the site of the executions in Srebrenica by the families of the victims, etc. This continuity in the themes Ophuis deals with gives his work a certain unity and turns it into a sort of encyclopedia of modern crime, without even letting us reach any reassuring conclusions as to the nature of good and bad.
 Ronald Ophuis is shown at the fondation Francès (in Senlis) as part of the Pax exhibition.

Africa seen through its animals

Eighteen animal species in 144 masks are presented in this book, an assessment of an interesting private collection, following the death of its owner, Gabriel Massa, a few months ago at the age of 88. He served as a high ranking civil servant in Africa, and visited, among others, Dahomey, Upper-Volta, and Zaire, which have all lost their names since Hyena, monkey or bird, each of these masks reproduces an animal and is charged with symbolism or a specific power. Nevertheless, the text is not really a wise dissertation as it prefers to step in the collectors shoes and espouse his passions, from the Bamana hyena to the Ligbi wart hog, including the Mossi antelope. The legends describe the object in detail and replace it in its context: we thus discover the existence of a pilgrimage by the Gurunsi in Burkina-Faso to the pond to offer a sacrifice to the crocodile or the relationship of an elephant hood-mask and the secret societies with the Bamileke in Cameroon.
 Masques animaliers d'Afrique noire (Animal masks from Black Africa) by Chantal Dewé and Gabriel Massa, Sépia publishers, 2010, 144 p., 38 .

AVILÉS (Spain) The Niemeyer cultural centre, designed by Oscar Niemeyer who today is 103 years old, was inaugurated on 26 March 2011.

CHICAGO  The Pritzker Prize, considered the «Nobel» of architecture, was awarded in 2011 by the Hyatt foundation to Portuguese architect Eduardo Souto de Moura.

PARIS  The sale of Art déco furniture from the castle of Gourdon, organized on 29 March 2011 by Christies, produced 24.2 million .

PARIS  A part of the art collection from the Sainte-Anne psychiatric Hospital, rarely shown since the international exhibition of psychopathologic art in 1950, is presented at the galerie Area, from 1 April to 31 May 2011.

PARIS  The modern and contemporary art fair Art Paris will be held from 31 March to 3 April 2011.

TOULOUSE  A Chinese painting on a roll, from the Qianlong era and 24 metres long, in ink and gouache, was sold for 22.1 million  at the hôtel Saint-Aubin on 26 March 2011, thus marking the record for 2011 for an object at an auction.