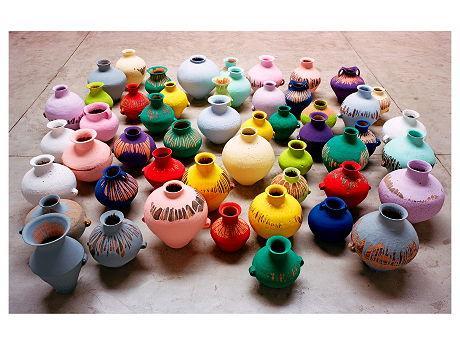 Ai Weiwei (born in 1957) is one of the most famous contemporary Chinese artists. While he has worked with the official institutions (in particular for the design of the Olympic stadium by Herzog and de Meuron), he has always kept a critical distance and has never hesitated to express his discordant opinion, in particular following the earthquake in 2008 in the Sichuan region, when he blamed the human loss on endemic corruption, which allowed for the construction of buildings (in particular schools) that are not adapted to the seismic environment. As he is highly visible internationally he was the last artist to create an installation for the Turbine Hall of the Tate Modern in London (one hundred million ceramic, sunflower seeds, to be seen until 2 May 2011) - his arrest by the Chinese authorities shocked everyone. He was arrested for no given reason on Sunday 3 April, and at the moment this letter is going out he has not yet been freed. While China has become the number one art market in the world (Artprice figures in March 2011), it has not yet carried out its revolution of mentalities: freedom of expression is still a daily struggle.
 Ai Weiwei will be the object of a monographic exhibition at the Lisson Gallery in London as of 13 May 2011.

Ai Weiwei at the Tate Modern

MADRID  Ribera was a typically Spanish painter, faithful to the bodegones and to the picaresque scenes. Are we that sure of this? The artist started his career in Italy- Rome and then Naples (in the wake of the viceroys)-, and that is really when he got his training, nourishing his Naturalism in Caravaggios sources as is shown in this exhibition dedicated to his early years. (1610-1622). The main interest of this small retrospective (some thirty paintings, some of them from the series of the Apostles and the Five Senses) is that it is not limited to bringing together pieces come from very far, but rather to push research forward. Since the Prado bought the Resurrection of Lazarus in 2001, it has been demonstrated that works previously attributed to the Master of the Judgment of Solomon actually were of Riberas hand.
 El joven Ribera at the Prado museum, from 5 April to 31 July 2011.

Alexander the Great, the return

OXFORD - Can anything new still be said about the Macedonian dynasty whose heroes lived over two thousand years ago? It seems so, according to this exhibition of nearly 500 pieces, many of which have never been shown to the public. They proceed, not from antique collections but rather from archaeological digs carried out over the last three decades in Vergina, the former Aegae, the city of Thrace which was the familys seat. The discovery of the tomb of King Philip II and his grandson Alexander IV (the son of Alexander the Great) by archaeologist Manolis Andronikos in 1977 triggered off a very successful campaign: other tombs, in particular of women, have been unearthed up to these very last few years. As a matter of fact, one of the jewels of the exhibition is the golden trousseau of the Lady of Aegae, discovered in 1988 (pendants, brooches, rings, etc). Clay heads, marble busts, fragments of gold shields, tiaras and bronze kouros complete the demonstration.
 Heracles to Alexander the Great at the Ashmolean Museum, from 7 April to 29 August 2011.

PARIS -The Dogon people and Marcel Griaule: the marriage seems indissoluble between the ethnic group living on the cliffs of Bandiagara in Mali and the famous ethnologist, at the head of the Dakar-Djibouti mission in the thirties. The exhibition presents emblematic objects  shown for a long time by European antique dealers  among them the famous Griaule masks classified in his work in 1938. Among the nearly 300 objects on display leading to the master piece of the quai Branly museum (the large Djennenke statue), there are sculptures, cabin pillars, doors for lofts, door locks, head rests. Curator Hélène Leloup, who has rubbed elbows with the Dogons for over 50 years (she opened her first gallery in 1956) used as a key to decrypt the exhibition the fascination the Western world has for the Dogon culture, which first marked ethnologists and then spread widely: today, among the artists who draw their inspiration from the Dogons, there is in particular Miquel Barceló.
 Dogon at the musée du quai Branly, from 5 April to 24 July 2011.

 BARCELONA  What did Courbet leave to European painting? That is the question put forward by Realismos, la huella de Courbet at the National Art Museum of Catalonia. From 8 April to 10 July 2011.

 COMPIÈGNE He was Catherine the Greats lover and Polands last king. Even though his name is forever linked to the countrys disastrous partition, Stanislas II Auguste was also a great lover of art: the castle of Compiègne presents a selection of his collection. From 3 April to 4 July 2011.

 PARIS - Designer Charlotte Perriand, a friend of Le Corbusier and a towering figure in the XXth century, is the object of a retrospective at the Petit Palais (Paris) . From 7 April to 18 September 2011

PARIS  Perfume bottles are not simple bottles: the greatest master glaziers all gave them a try. We can check it with this sale of a rich private collection that includes over 280 lots, from the beginning of the XXth century to our day. Mouchoir de Monsieur by Guerlain is one of the most ancient pieces presented (it dates back to 1902) and other great classics are in the spotlight such as Lanvin, Caron, Schiaparelli, Coty or the most venerated of all, Houbigant, founded right before the French Revolution (with more recent creations, from the 1920s). While most of the lots are accessible, under 1000 , a series of Lalique raises the stakes much higher: Trois Guêpes (1912), Eucalyptus (1919) and Cassis (1920) are each estimated at more than 7000 . Names that are not as well-known by the general public but sought after by collectors will also be presented such as Babani with Giardini, a bottle from 1920 (lot 71, 2500 ), Myrurgia (with its Suspiro de Granada from 1928, in black glass). Among the mythic models, we can also mention Normandie by Jean Patou, in honor of the transatlantic ship or 1811 by Molinard, to the glory of Napoleon, in spite of his difficulties with Spain that year
 Haute parfumerie, collection Serge Albisetti 8 April 2011 at Richelieu-Drouot (Néret-Minet-Tessier SVV).

Franz Ackermann and his travels

He is one of the sure values of contemporary German painting, is exhibited at the White Cube gallery in London and reaches significant figures in public auctions (379 000  for B2 Barbeque with the Duke in 2006 at Christies in London). Franz Ackermann (born in 1963) prefers large colored installations, sort of large maps from the National Geography Institute, that are criticisms of our world of consumers and our frenzy for moving around the planet. Ever since his Mental Maps produced in hotels following urban walks, the theme he has explored for the last twenty years is indeed the one of travels, and in his work he fusions the symbols and the clichés picked up in one country and another. We see the silhouette of the continents, the reflection of a mango tree, flowers, fragments of architecture, pieces of roads, and the vivid colors we associate with exoticism to create geography through accumulation, concretion, or superimposition  similar to the globalization that blurs out differences to give way to a standardized model.
Franz Ackermann created an installation during this exhibition Immersion from 1st April to 25 September 2011 at the museum of Valence outside of the city (Céas Printing Press), next to Elisabeth Ballet and James Turrell.

The knights of the Renaissance further resembled roaming jewelleries than gladiators. That is the feeling we end up with after looking at the catalogue of the exhibition on the Armures des princes dEurope currently held at the musée de lArmée at the Invalides monument. Obviously, it is an advantage if one knows the technical vocabulary and can distinguish an ancient round shield for foot soldiers from a corselet, the back of armor from the helmet used in the Burgundy. But even without this specific vocabulary, one is stunned by the decorative wealth of these armors, full of precious materials and wise arabesques. The crown and the morion of Charles IX are made in solid gold and bear dozens of small medals in cloisonné enamel. The half-armor of D.G.V. Lochorst seems to be the work of a talented goldsmith hit by horror vacui. Similar to Napoleons guards who impressed everyone with their bear bonnets, the armors from the Renaissance, mannerist works of art from workshops in Milano, Antwerp or Paris, had to impress with their magnificence as well as with their resistance to blows from swords: they were often used more for parades and ceremonies than for battle
 Armures des princes dEurope, Nicolas Chaudun publishing house, 2011, 382 p., 55 .

BORDEAUX  The Itinéraires festival, dedicated to travelling photographers, will be held from 1 to 30 April, in different venues in the city.

LONDON  Architect Peter Zumthor will be the author of the next temporary pavilion of the Serpentine Gallery. He has unveiled a project centred on a garden drawn by landscape artist Piet Oudolf.

MEXICO  The modern and contemporary art fair Zona Maco will be held from 6 to 10 April 2011 at the Centro Banamex.

MILANO  The modern and contemporary art fair Miart will be held from 8 to 11 April 2011 at Fieramilano.

PARIS - Lucknow, the capital of Awadh, the province of the Moghul Empire in the North of India, saw the expansion in the XVIII and XIX centuries of an extraordinarely sophisticated, composite society, both Indian and European. The musée Guimet brings it back to life through more than two hundred works of art.