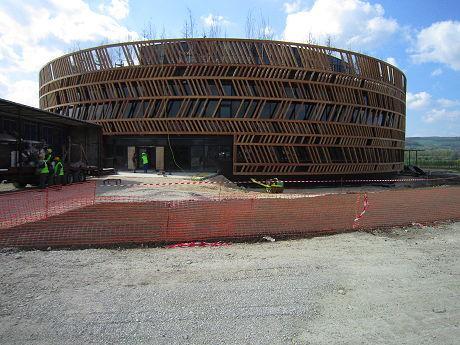 The aim of the future MusséoParc of Alésia is to understand the battle that turned Vercingétorix into a myth and gave birth to the Gallo-Roman civilization. The whole museum is dedicated to this confrontation of 52 B.C., with its huge fortifications and its epic battles of cavalery. The visitor will get initiated to the daily life of the troops and the patient work of rediscovery launched by Napoleon III and picked up again in our time by aerial explorations with lasers. The inauguration was expected this Spring, but has just been pushed back to the March 2012. The region of Burgundy will then boast of three major museums to better decypher its archaeology: the MuséoParc, the museum of Châtillon-sur-Seine (where the famous Vix vase is kept) and the one of Bibracte, dedicated to the Gaull civilization of the Oppida. The first is designed by Bernard Tschumi (the author of the museum of the Acropolis in Athens), the second by Antoine Stinco (responsible for the Jeu de paume museum in Paris), the third by Pierre-Louis Faloci (also known for the Moulin de Valmy and the Centre du déporté du Struthof). These are three «architect museums». The winning formula to relaunch cultural tourism (yesterday Bilbao with Frank Gehry, tomorrow Glasgow with Zaha Hadid, in the future Abu Dhabi with Jean Nouvel and Norman Foster) is finally gaining a good reputation in the French province

In the eye of the proletariat

MADRID - Is avant-guard photography born in artist workshops, or rather in proletarian street demonstrations, with cameras picked up by amateurs? The retrospective at the museum Reina Sofía is not only interesting due to the quantity of snapshots shown  in total, one thousand!  but also because it is an exhibition based on a thesis: it shows that modernism does not necessarily lie where we expect it. Germany (with the magazine AIZ that launched in 1926 a contest of workers photography) and the Soviet Union which are the two cribs of this popular movement. It was pursued by the communist parties of central European countries, would reappear in Spain with the civil war and would develop in the USA with the Workers Photo League, Edward Weston and Tina Modotti. Among the authors shown we can admire celebrities such as Capa, Strand and Cartier-Bresson, writers and movie directors such as Joris Ivens or Ilya Ehrenbourg or forgotten talents such as Eugen Heilig, Ferenc Haár, Arkady Shaikhet.
 Fotografía obrera 1926-1939 at the museo Reina Sofía, until 22 August 2011.

PARIS - Gino Severini (1883-1966) held the record for «isms»: throughout his long career, he was in turn part of the divisionism adventure (1905-1910), of Futurism (1911-1915), Cubism (1916-1919), up to the neo-Futurism thirty years later, alternating his commitments with escapades more difficult to classify, towards figuration and abstraction. The exhibition documents these multiple interests based on the rich collection from the museum of Trento and Rovereto, on works from the musée dOrsay and other international loans. Severini was introduced to the avant-gard movements by Giacomo Balla and then took on a European dimension by leaving his Tuscan Cortona to settle in Paris in 1906. He would befriend Braque and Picasso as well as Paul Fort, the poet of the «little white horse» whose daughter he would marry. Expansion sphérique, Train blindé en action or Danseuse articulée show he was interested in formal questions as well as in reporting on his time, caught between the war and the Roaring Twenties.
 Gino Severini at the musée de lOrangerie, from 27 April to 25 June 2011.

PARIS - Rembrandt was fascinated by the stories of the Bible and by painting with a model (the reason why he preferred to work in his workshop rather than travel to Italy). A revolution was to result from these two convictions: a new way of representing Christ. No longer a ficticious character that met the demands of the unforgettable canon of the Lettre à Lentulus but rather a man in flesh and blood, at grips with doubts and emotions, which they say Rembrandt took the model from a young man from the Jewish communnity of Amsterdam. It is this huge audacity the Louvre documents by presenting, around the famous Pilgrims of Emmaüs just restaured, drawings, paintings and etchings by Rembrandt, confronted to the production of the artists of his time. The leap forward in the 1640s, never studied so in depth, appears dazzling.
 Rembrandt et la figure du Christ at the Louvre museum, from 21 April to 18 July 2011. The exhibition will be presented at the Philadelphia Museum of Art from 3 August to 30 October 2011 then at the Detroit Institute of Arts, from 20 November 2011 to 12 February 2012.

Art of the day also recommends

 COLOGNE  In August Sander. Sardinien, the Photografische Sammlung looks into a 30-day trip the photographer took to Sardinia in March 1927.

 LILLE - Portraits de la pensée is an original exhibition at the Palais des beaux-arts on how to restore the mind. The demonstration is made based on 50 portraits of painters of the Spanish Golden Century , from Ribera, Vélasquez, Giordano and the school of Utrecht. Until 13 June 2011.

 PARIS  The Pinacothèque, frustrated for not having its exhibition on the Maya jade masks, canceled at the last moment, is getting its revenge with Le voyage imaginaire de Hugo Pratt dedicated to one of the greatest creators of comic strips of the last century. Until 21 August 2011.

PARIS  A French Surrealist wardrobe, a South American Surrealist leaflet, an original photograph of Denise Bellon, issues of the magazine Minotaure, others of the magazine Documents by Georges Bataille, type-written letters by Jean Arp, notes signed by Michel Leiris, an original edition of the Mont de piété by André Breton, a postcard by Jacques Hérold As befits the profusion of avant-gards, this sale puts lots side by side in a manner that would have pleased desperate poet Lautréamont, with reasonable estimates of a few hundred Euros. Except for one of the 300 boxes of La mariée mise à nu par ses célibataires, même, by Duchamp, with its 93 documents. It is estimated at 12 000 Euros as it is decorated with a very legible signature.
 Avant-gardes at Richelieu-Drouot (Cornette de Saint Cyr) on 21 April 2011.

Ben Kinmont, a certain idea of a performance

We know the obsession artists have, especially contemporary ones, with everything new. Ben Kinmont is just the contrary: the artist from New England (born in 1963) loves most of all to recycle completed projects. While his latest exhibition in Paris cannot reactivate his conversation with strollers in New York in 1992 (I need you), it does it for other actions such as Digger Dug where, based on interviews he carried out throughout the world, he testifies on the manner artists can have an altruist activity. As we easily understand, Ben Kinmont does not produce material works in the usual sense but rather a corpus that tends more towards sociology. He questions the appropriation of the income from artistic activity, by sharing them for example with the authors of his performances (he sent a check for 40 $ to each of the participants of Digger Dug). All the documents produced are carefully kept - and enriched during the «remakes» - to be used as archives susceptible of endless developments.
Ben Kinmont is shown at the fondation Kadist until 1st May 2011.

The manifest of Burle Marx

As Arnaud Maurières underlines in one of the interviews that make up the work, there exists a begonia burle-marxii and a heliconia burle-marxii. These plants are living tributes to one of the greatest landscape artists of the XXth century, Roberto Burle Marx (1909-1994) who associated his name to the genesis of Brasilia, as well as to the centre of contemporary art of Inhotim in Belo Horizonte, to the pavement of the beach of Copacabana or the garden del Este in Caracas. Jacques Leenhardt and Gilles Clément tell an anecdote which alone makes us feel attached to the character. In 1928, as a painter in Germany, he was drawing flowers at the botanical garden of Dahlem when he read the labels and realized they were from the same country as he and that he had never noticed them. His vocation was born on that day. How did he mark Brazil, how did it announce the rapprochement between contemporary art and nature, how does it fit in with todays concerns about biodiversity? These are some of the directions the book explores, written by various authors on a humanist of the landscape.
 Dans les jardins de Roberto Burle Marx, directed by Jacques Leenhardt, Actes Sud, 2011, 184 p., 22 .

AVIGNON - The Piss Christ, a photograph by Andrés Serrano, representing a crucifix in the artist's urine, was vandalized with a knife at the Fondation Lambert on 17 April 2011.

BARCELONA  The sacristy and the crypt of the Sagrada Familia church by Gaudí were damaged by a arson on 19 April 2011.

A slide-show on El Pais

BERLIN - The German capital will have a monument that will commemorate the reunification. Baptized Citoyens en mouvement (Citizens inmovement), the mobile plateau was designed by choreographer Sasha Waltz and 'architect Johannes Milla.

The image of the monument in The Guardian

CHAUMONT-SUR-LOIRE - The International Garden Festival will be held from 22 April to 16 October 2011 on the theme «Jardins davenir ou lart de la biodiversité heureuse» (Gardens of the future or the art of succesful biodiversity).