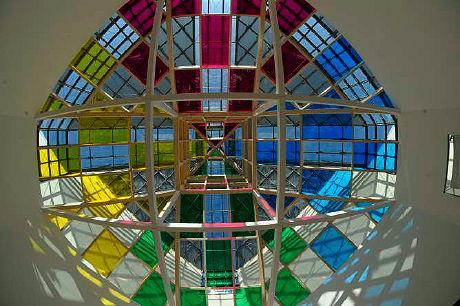 The man with the bands

He is not Frances representative to the Biennale in Venice for 2011 (it will be Christian Boltanski) but he is one of the heavyweights of French contemporary art, together with Annette Messager, Sophie Calle or Bertrand Lavier. He has one obsession, and it is bands 8 .7 cm wide (very precisely), which he inescapably aligns in white and in color. We saw the scandal he created a long time ago at the Guggenheim (in 1971, when his installation was censured, notably, by his artist colleagues), then in Paris (at the Palais-Royal, in 1986). Since then Daniel Buren has become a confirmed value: he returned to the Guggenheim in 2005 and supervised the restoration of his columns in the Palais-Royal in 2009-2010. For his 2000th intervention, or almost, the artist has remained faithful to his medium. This time he will unfold it «in situ» as usual, in a venue that has become a new reference in contemporary art  the Centre Pompidou Metz. Burens obsession with bands, dug out at the Marché Saint-Pierre, dates back to 1965. On that same year Roman Opalka started his great work, painting, each day, growing numbers, with paint that is increasingly white. In 2015, Buren and Opalka will have dug the same grooves for half a century. Who said contemporary art was superficial, capricious and subject to fashion?
 Daniel Buren presents Echos at Centre Pompidou Metz, from 8 May to 12 September 2011.
 Roman Opalka is exhibited until the end of May 2011 at the museo Correr, in Venice.

GENEVA  One of the pieces exhibited has been the talk of the town for some time. It belonged to Tristan Tzara before being exhibited by gallery owner Charles Ratton, the pioneer of «primitive arts» at the beginning of the thirties, then at the Metropolitan Museum of Art, triggering the dubbing of «African art». It is a Kwele mask, with traditional traits in the shape of a heart, covered with white paint. Around this «monument» the exhibition groups masks, figurines and reliquaries from neighboring cultures the Fang, the Vuvi, the Mbete  to draw up the portrait of an art that is proper to Gabon, which has become so difficult to discover in situ today.
 Art ancestral du Gabon at the musée Barbier-Mueller, from 9 May 2011 to 15 January 2012.

After Rodin, with Rodin

PARIS - Rodin was always an untouchable icon, in particular between the two wars. But what has been his real influence since the fifties? That is the question the musée Rodin asks by presenting stimulating parallels. The one between the Robe de chambre de Balzac (Balzacs bathrobe) -a statue that created a scandal at the time- and La Peau (The skin) by Joseph Beuys is particularly expressive: one feels, if not a relation, at least a meeting point. Other matches of this type (the preparatory busts for Clemenceaus portrait in face of a series of waxes molded by Ugo Rondinone), set out in eleven themed sections (the material, smooth surfaces, modeling, partial figures, dissolve, etc.), refer to Duchamp as well as to Fautrier or Urs Fischer. The presentation ends with a video by Douglas Gordon, Star Trek, Predictable Incident in Unfamiliar Surroundings, that lists the famous Hollywood kisses, a perfect counterpoint to the founding one by Rodin.
 Linvention de luvre, Rodin et les ambassadeurs at the musée Rodin, from 6 May to 4 September 2011.

PARIS For a long time she was considered as the «architect who would never build». Known for her futuristic projects, based on high tech and on forms that are as insane as Frank Gehrys, she never went past the last stage of contests or if she did, she would find herself all tangled up in endless problems  like the one of the Opera in Cardiff, which was finally abandoned along the way. Zaha Hadid seemed condemned to a position of a theorist. In a decade things accelerated and she is now part of the Top Five, working in Singapore and Abu Dhabi, in Cincinnati and Marseille. Now it is in the same Mobile Art pavilion she had designed for a roving exhibition and which has just been offered by Chanel to the Institut du monde arabe  that she presents her itinerary, combining current projects and completed ones (Nile Tower in Cairo, the CMA-CGM tower in Marseille, the central bank in Iraq, the country where she was born in 1950), installations, lightings. A «total» work that goes beyond traditional presentations of architecture projects.
 Zaha Hadid, une architecture, at the Institut du monde arabe, from 29 April to 30 October 2011.

 ALICANTE  Tesoros de la archeología rusa: in the framework of the Spain-Russia crossed year, the MARQ (Museum of archaeology of Alicante) hosts nearly 500 objects from the major Russian diggings, on loan from the museum of the Hermitage. From 15 April to 31 October 2011.

 GENEVA  With Les sujets de labstraction, the Rath museum presents works from the Seconde Ecole de Paris, belonging to the collection of Jean-Claude Gandur, the oil magnate and future patron of the enlargement of the Musée dart et dhistoire. From 6 May to 14 August 2011.

 PARIS  What was the architecture of the Mitterrand years like, in the capital? That is the question the Pavillon de lArsenal puts forward in Architectures quatre-vingt. From 3 May to 25 September 2011.

PARIS  How did our ancestors live? That is the type of information we receive invariably during periodic sales at the Ferri house on popular art. Whether the objects are practical, fun or religious, they unveil a part of our past which we have often forgotten. A grinder in the shape of a womans leg who would dare do that in our day?  or a barbecue spit in wrought iron, a granite salt mill, a roast fork, a sculpted nut cracker, a trough for cutting pork, a milliners head or body  Once useful, these objects today can only be thrown away or collected. In the latter case, many have been ennobled: a small soup bowl in ceramic from Ligron (in the Sarthe region) is estimated at more than 3000 Euros and a reel in sculpted beech more than 1000 Euros. Fortunately, for those with meagre means there is a baby carrier from Parthenay, a grain measurer from the Queyras region (approximately 100 Euros), a school boys wooden satchel or a wedding spoon in sculpted boxwood.
 Curiosités et art populaire on 6 May 2011 at Richelieu-Drouot (Ferri SVV).

In spite of his family origins from Central Europe, Saúl Kaminer (born in 1952) was for many decades the ideal representative of the magic, Latin-American realism, such as it bloomed in Oaxaca, in Southern Mexico, with interpreters such as Rufino Tamayo, Rodolfo Morales or Francisco Toledo. His characters all muddled and tangled up, and confused, full of color, stylized, deformed, making up a dense selva, have always been his «trademark». But the artist recently announced in an interview with the Mexican daily «La Jornada» a turn in his production (such as for example Jean Hélion, who once upon a time did it as well): the economic crisis has pushed him towards abstraction. With the argument that our troubled times need new forms to nourish the spirit and the mind.
 Saúl Kaminer is exhibited at the Thessa Herold gallery (7 rue de Thorigny, 75003 Paris), from 5 May to 2 July 2011.

The note on the Delarge, the dictionary of modern and contemporary visual arts

The interview of Saùl Kaminer in La Jornada

We are so used to living in our buildings with security codes and central heating that we have forgotten that a good part of Humanity was content for a long time to have flexible structures that could easily be dismounted and transported. Nomadic people have not totally disappeared in Mongolia, the yurt is still very used and the Sami in Siberia are still happy with their conic tents with a framework. But the elegant iconography  photos in black and white in large grain, sketches by explorers  reminds us this mode of living is (temporarily?) endangered. From the Patagonians to the Inuit, from the Bushmen to the Tungusians, including the Gypsies, this world tour is very well documented. It is both a precise ethnographic study  why do the Ostyak turn off the fire at night when the temperature is 40°C? How should one orient ones feet when invited into a yurt?  and a remarkable technical manual: how does one choose stacked snow to make an igloo? How do the Samoyeds peel off the bark of the birch tree for cladding? When dismounting a Bedouin tent, does one first take out the pegs or the canvas? The result is rather surprising. Even though modern man is incapable of changing a light bulb, most start dreaming of another type of life
 Habitats nomades by Denis Couchaux, Alternatives publishing house, 2011, 192 p., 39 

GRENOBLE  The Musée archéologique Saint-Laurent, which groups together fifteen centuries on its site (from the necropolis of the IVth century to the XIXth century church siècle) will reopen on 6 May 2011 after 8 years of being closed.

KARS  During the demolition of the statue of Mehmet Aksoy, ordered by the authorities (see previous newsletter), artist and activist Bedri Kayam (the president of the Turkish branch of the AIAP, The International Association of visual artists), who protested against this decision, was stabbed.

MADRID  The 3rd edition of the photography festival of Madrid Foto will be held at the Feria de Madrid from 5 to 8 May 2011.

MONTROUGE  The salon dart contemporain de Montrouge will be held from 5 May to 1 June 2011.

VERSAILLES-Brothers Ronan and Erwan Bouroullec have just been chosen by the Public Authority of the Château de Versailles for a contemporary installation of the famous Gabriel staircase.

TUTANKHAMUN ALSO AT THE CINQUANTENAIRE MUSEUM

BRUSSELS - The Heysel unwraps, over more than 4 000 sq. mts. three funerary chambers rebuilt exactly as they originally were. The Cinquantenaire Museum is echoing this exhibition by presenting two new rooms in which it gives particular attention to the presence of Tutankhamun and his family in its own collections.