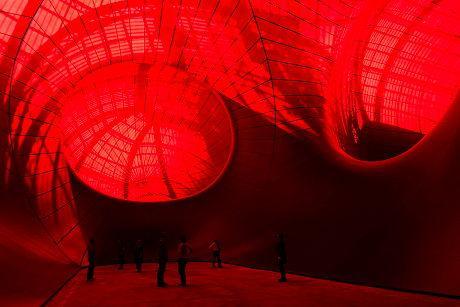 As Greece sees itself plunged in a deep crisis, it holds on to art with the energy of despair. The North angles of the Parthenon are currently being restored while the museum of the Acropolis, designed by Bernard Tschumi, is a real success: it welcomed nearly 1.5 million visitors in 2010. And on 5 May 2011, when the programs of France Culture delocalized completely to Athens, the private collection of ship owner George Economou was being unveiled at the latest cultural site in the city, a former silk factory in the district of Metaxourgeio. This man born to a wealthy family in 1951, created a colossal maritime trading company, Cardiff Maritime, which made him one of the richest men in the country. He has been collecting for nearly twenty years and we can see among his 3000 works paintings and drawings by Schiele, Dufy, Nolde, Metzinger, Brauner, Miro, Delvaux, Hockney or Tsingos The selection is inspiring but it seems the most beautiful pieces are still hidden away in storage, with an unknown body of works by artists from the German and Austrian Sezession and Expressionist movements. He recently bought all of Otto Dixs graphic works (524 pages!), and they will go on long-term loan to the Staatliche Graphische Sammlung in Munich. «I am thinking of a permanent museum», the collector explains. «It could be in Athens as well as Berlin, Vienna, London, New York or Paris.» As all good businessmen, he promises to reach a decision very soon
 The George Economou collection is presented at the Municipal Gallery of Athens (Metaxourgeio building, angles Leonidou and Milerou) until 2 October 2011.

Between utopia and dystopia

BORDEAUX -Here is an exhibition that throws us off from the beginning: those who will be able to decipher the title will be the very happy few. For all the rest of us, dystopia is the contrary of utopia. It was thought of by a writer of science-fiction, Mark von Schlegell, and it tries to show how many of our current avant-gardes have been contaminated by the consumerist creed. Our world is described in New Dystopia, the title of the authors latest book, and it is clearly apocalyptic. To do so he brought together the works of some fifty artists (from Cyprien Gaillard to Franz West) who describe hostile spaces, explosions, radiations, solitary existences. There is nevertheless some space for hope: at the bottom of this black hole, of this industrial catastrophe, new utopias can come to life. The catalogue itself is quite original, as it is presented as a novel, written by the same curator.
 Dystopia at the CAPC from 14 May to 28 August 2011.

Dior, a lover of artists

GRANVILLE -The extraordinary success of the «New Look» and his couture house often make the public forget that Christian Dior started his career in the difficult years as a gallery owner, around the crisis of 1929. He had one on rue Cambacérès with Pierre Colle where future glories such as Giacometti, Calder or Leonor Fini had their first personal exhibitions. Dior kept that sensitivity for contemporary art throughout his life as can be seen in the retrospective that brings together, in his charming Normand villa Les Rhumbs, all those who counted for him. Of course there is Christian Bérard, Jean Cocteau and composer Henri Sauguet, as well as illustrator René Gruau or photographer Willy Maywald, whom he asked to help him forge the image of his house. The pieces shown are very stimulating by their eclecticism, and they range from a gouache by Max Jacob to the bathrobe created by Edward Molyneux based on a drawing by Raoul Dufy, including the dress designed by Elsa Schiaparelli for the fiftieth anniversary of the Eiffel tower.
 Christian Dior, le bal des artistes at the musée Christian Dior, from 14 May to 25 September 2011.

ZURICH  Joseph Beuys (1921-1986) always had a privileged relationship with Nature. We know he had himself locked up for various days with a wild coyote, without trembling, and he rocked a dead hare in his arms. This attachment is undoubtedly due to his extraordinary survival during World War II: as an aviator in the German army, he crashed in Crimea and was saved by the felt blankets and doses of honey offered by the Tatars who came to his rescue. Today, the Kunsthaus retraces his adventure in the Abruzzi region: a friend of the Durini barons, he was received for years (1973-1985) in their property in Bolognano and there he carried out actions against the materialism of our society, under the title of Difesa della natura. From his discussions with the residents to the planting of 7000 trees (Piantagione Paradise), and the objects of the edition, all is referred to through some one hundred works of art.
 Joseph Beuys, Difesa della Natura at the Kunsthaus Zurich, from 13 May to 24 August 2011. Catalogue Electa of 960 pages.

 BARLETTA (Italy)  In Incanti e scoperte, the Pinacoteca De Nittis studies the influence of the Orient in Italian painting in the XIXth century. Until 5 June 2011.

 NEW YORK  The Metropolitan Museum has us rediscover the Swiss Gilléron family, the first at the beginning of the XXth century to specialize in quality copies of works of art unearthed by the archaeologists in Greece. From 17 May to 13 November 2011.

 PARIS  The Musée dart moderne de la Ville de Paris dedicates a retrospective to Marc Desgrandchamps, a painter of contemporary figuration, through some forty paintings in large formats. From 13 May to 4 September 2011.

PARIS-What did Robespierre write three days before his death? The Speech of 8 Thermidor. He who never shied away from the most dreadful decisions, did he at all repent in his writings? That is what the buyer of the remarkable scrapt papers that will go on sale on 18 May 2011 will find out. They include the elements of 5 speeches and 4 articles, written by the Incorruptible, among which Speech by the Jacobins on war. Over 200 000 are expected for these direct testimonies on the history of France. During the same sale, there will be more amusing lots such as the hand fan written on by Cocteau (meant for Misia Sert, estimated at 3000) or a non-referenced typed version of Saint-Exupéry's Little Prince (estimated at 40 000).
 Books and manuscrits at Sotheby's on 18 May 2011.

He is used to gigantic volumes and once again he will prove it. The installation by Anish Kapoor for the Monumenta manifestation succeeds in filling the nave of the Grand Palais as well as Richard Serra did before him with his steel steles. It is named Léviathan, like the obscure monster, and can be seen as well from the inside as from the outside. In the first case, we are immerged in a red the fetish color of this artist born in Bombay in 1954  and oppressive universe, in which air is lacking. In the second case, we stroll between huge canvas spheres, similar to medicine-balls that rub elbows with the vault. Following his Marsyas at the Tate Modern in 2002, and his Sculpture Farm in New-Zealand in 2009, what will be his next limit in his search for the disproportionate?
 Léviathan by Anish Kapoor at the Grand Palais, from 11 May to 23 June 2011.

Among the various fonts that have marked the history of typography, it has a very front line position, right next to Garamond, Times or Frutiger. The Futura, designed by German painter Paul Renner in the twenties, is one of the most famous fonts without impasto, in the style inaugurated by le Caslon as of 1816. The book describes its extraordinary expansion, in the period that knew both the creative effervescence of the Bauhaus as well as Hitlers repression. Thanks to the international presence of the Bauer foundry that produced it (it has workshops in Barcelona and New York), the «print for our times» crossed borders. It would be used in the magazines Vu and Casabella, in posters by Jean Carlu, later in advertising campaigns for Volkswagen or in the major Italian department stores of La Rinascente, who had the nerve of bracking it together with the Bodoni font. Stanley Kubrick paid a huge tribute to it by using it abundantly in 2001 Space Odyssey
 Futura, une gloire typographique by Alexandre Dumas de Rouly and Michel Wlassikoff, Norma, 2011, 192 p., 45 .

AMSTERDAM  The modern and contemporary art fair, Art Amsterdam, will be held from 11 to 15 May 2011.

DÜSSELDORF  The Museum Kunstpalast, whose collections include the Assumption of the Virgin by Rubens, as well as contemporary art (Balkenhol or Hockney), reopened on 7 May 2011 after two years of refurbishing works

EUROPE  The 7th European Museum Night will be held on 14 May 2011 in the evening in France and in various European countries, with night opening and events held in various museums.

PARIS  The Temps forts Drouot, a presentation of the most beautiful lots from future sales will be held at Drouot-Montaigne from 18 to 22 May 2011.

ROUEN A Maori head, belonging to the collections from the du Museum dHistoire naturelle, was solemnly returned on 9 May 2011 to its people in order to be buried in New-Zealand.

PHANTOMS AND NIGHTMARES Contemporary art and collections from 1914-1918

PÉRONNE - BEAUVAIS - From 13 May to 28 August 2011, the Historial de la Grande Guerre and the Espace culturel de Beauvais, located in a region greatly scared by the wars, confront current works with the Historials collections from 1914-1918.