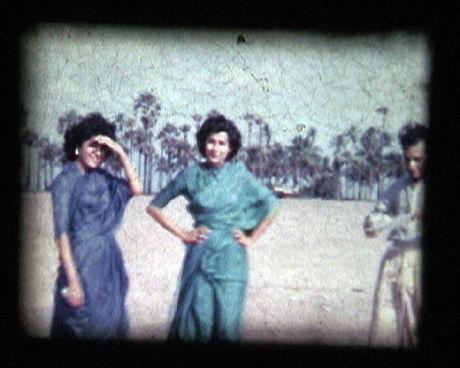 Ayisha Abraham, Enroute or Of a Thousand Moons, 2010-2011 Video installation based on amateur, 8 mm videos by Ramesh Kapoor and Hiru Patel Digital video, circa 20 mn. Artist's collection. Work done with the participation of the Centre Georges Pompidou (exhibition Paris-Delhi-Bombay).

Venice before the opening

Our correspondents Preston Thayer and Marjorie Och send us the first of their dispatches about the 2011 Biennale.

PARIS  In its beginnings, the Centre Pompidou, directed by then curator Pontus Hulten, had launched the series of exhibitions «Paris («Paris-Berlin», «Paris-Moscou», «Paris-New York») to «place Paris in the flux of artistic exchanges». This same ambition prevails decades later in the enthusiastic exhibition «Paris-Delhi-Bombay» that will set the Centre Pompidou on Indian time for four months: movies, music, debates and, obviously, contemporary art. The exhibition is founded on various commissions and does not wish to limit itself to the vitality of Indian contemporary creation, from Anita Dubes videos to the stacks of stainless steel dishes by Subodh Gupta. It also aims at studying the way the French scene looks at this reality which globalization has brought so near and which nevertheless remains so foreign  Gilles Barbier, Orlan or Cyprien Gaillard (among some twenty artists) have thus been invited to deliver their interpretation of «Bharat» (the Sanskrit name of India), combining history, ecology and myth. From karma to Bollywood, including Shiva, Gandhi or the Royal Enfield motorcycle, the dialogue will cover a wide scope
 Paris-Delhi-Bombay at the Centre Pompidou, from 25 May to 19 September 2011

An exploration of the European body

PARIS  How did the different cultures of the Mediterranean basin interpret the human body throughout their history? The Fondation Edf challenges this disproportionate problem. Luckily, in this case, the objects speak for themselves and the choice is made in a reservoir of quality, the collections of the MUCEM (Musée national des civilisations de la Méditerranée)  the National Museum of Mediterranean cultures- that is meant to open in Marseille in 2013. Member by member, element by element  the hand, the heart, the eye, hair  our whole physique is detailed. Many popular expressions such as having a flea in your ear, or to drink bottoms up are linked in some way to reality or have a logical explanation that is materialized in a cake pupazza, a ginger bread man or a manual on hand reading
 Morceaux exquis at the Espace Fondation Edf from 27 may to 25 September 2011

PONT-AVEN  He was nicknamed the «Bucolic nabi». Ker-Xavier Roussel is not the best known among that group of painters who were first inspired by Brittany (materialized by this native from Lorraine by adding the prefix Ker to his first name). Having always been in the shadow of Gauguin, Sérusier, Maurice Denis and Emile Bernard, this first exhibition in France in the last twenty years of his monographic work should give him a place of his own. He had a long artistic career (born in 1867, he died in 1944) and the works presented go from the 1890s to the decade of the 1930s. He left an important corpus of prints as well as monumental decorations for the palais de Chaillot or the Society of Nations. The nearly one hundred works presented show his attachment to the mythological themes, to intimate scenes (he was Vuillards brother-in-law) and his taste for landscape that made him assimilate Cezannes «lesson», the master he then visited when on a pilgrimage on bicycle in Provence, in 1906
 Ker-Xavier Roussel at the museum of Pont-Aven from 28 May to 2 October 2011

VENICE - Today she is not as well known as her ex-husband Leo Castelli but Ileana Sonnabend (1914-2007) was his equal in being one of the great figures of the art world in the XXth century. A Romanian beauty and heiress of a great industrial dynasty, Ileana Schapira (she took the name of her second husband, Michael Sonnabend) linked her destiny to that of the young executive of the Generali insurance company, when he was on a mission in Bucharest on the eve of World War II. It was in the United States that the two discovered their talents as exceptional art dealers and collectors. The exhibition set up in the sanctuary of another exceptional woman  Peggy Guggenheim  can be looked at like a Whos Who of the great art currents, from the avant-gardes of the fifties to the most recent ones, from Rauschenberg to Lichtenstein, from the Becher couple to Jeff Koons. But the aim of this exhibition is mainly to illustrate the links Ileana Sonnabend had with Italy, embodied not only in the Arte povera (Kounellis, Merz, Pistoletto) but in Fontanas slashes or Mimmo Rotellas reassembled collages as well.
 Ileana Sonnabend, an Italian Portrait at the Peggy Guggenheim Collection, from 29 May to 2 October 2011.

Art of the day also recommends

BERLIN  The Brücke museum dedicates a retrospective to one of the founders of the movement with the same name, the apostle of color, Karl Schmidt-Rottluff. Until 17 July 2011.

BREST  The national naval museum focuses on Pierre Loti photographe: 75 snapshots retrace his pilgrimages in the Holy Land, in the bay of Along or in Turkey. From 31 May to 2 October 2011.

ROME  The Scuderie du Quirinale are dedicating a retrospective to Lorenzo Lotto, one of the most secret masters of the Renaissance. Until 12 June 2011.

A window on Jacquet

PARIS - It is always interesting to see the scattering of an artists workshop. Aside from the «fresh» canvases - those rarely shown- it is possible to buy, the content gives an idea of the artists tastes. This week a part of the universe of Alain Jacquet, one of the New Realists, a friend of Cesar and Martial Raysse, is partially distilled for us. The artist who died in 2008 in New York leaves a number of significant works among which some copies of his famous Déjeuner sur lherbe from 1964. Mario Schifano, Pierre Restany and his wife Janine are the models of this pixel, updated interpretation of Manets Déjeuner, treated in silkscreen on canvas and of which the exact number of copies produced has never been known The one fin this auction is estimated between 20 000 and 40 000 , less than the «Camouflages», variations on paintings by Bronzino or Matisse, which could go for as much as 60 000 . A few abstract gouaches should be accessible around 1000 or 2000 . A stabile by Takis, a pot by Raynaud, a silkscreen by Man Ray, Bambara and Yoruba masks and scepters, sculptures by Bernar Venet or by Meret Oppenheim accompanied Jacquet in his work.
 Alain Jacquet auction at Richelieu-Drouot (SVV Joron-Derem) on 30 May 2011.

 On that same day at Artcurial, the sale of Michel Seuphor succession.

Anita Dube, the weight of words

She was born in 1958 in Lucknow, a city currently celebrated at the musée Guimet in Paris for its creative vitality in the XVIIIth and XIXth centuries. But Anita Dube is not really attached to tradition: her sources of inspiration for her latest exhibition at the galerie Dominique Fiat are closer to Joseph Kosuth, Lawrence Weiner or Jenny Holzer. Letters are embodied (the artist even cuts out a few in a piece of meat) and literally incarnate, by the way they are displayed or their material, the sense of words  Erotics, Politics, Elegance Or Kash: the first syllable of the word Kashmir means «hope», which the local conflict belies. Anita Dube is among the Indian artists who participate in «Paris-Delhi-Bombay» at the Centre Pompidou. She is represented with the installation Silence, done with human bones.
 Anita Dube is exhibited at the galerie Dominique Fiat from 24 May to 13 July 2011.

He was a meteor that left no traces. Ed Feingersh was one of the most promising photographers of the fifties in New York, an adept of natural light, whom Edward Steichen integrated into his famous exhibition «The Family of Man», at the MoMA in 1955. Due in part to his bohemian side, his premature death (in 1961, at the age of 35) and the bankruptcy of his agency Pix, the greater part of his snapshots had disappeared. Up to the accidental rediscovery, in a warehouse in Brooklyn in 1987, of the series he had dedicated to Marilyn Monroe for the magazine Redbook in 1955. The book presents the five days the desperado photographer shared with the mythical blonde, from Madison Square Garden to dusk at Costellos. But he is more convincing in the description of the photographers rushed itinerary, as a contemporary of the experiments carried out by Robert Frank and Garry Winogrand, and which symbolize the end of an era: jazz, black and white, Cartier Bressons «decisive moment», the daily events pushed off the scene by the Sixties, Kennedy, rocknroll, color photograph, television and mass consumption
 Une blonde à Manhattan by Adrien Gombeaud, Le Serpent à plumes, 2011, 216 p., 19 

 The Maison des Amériques latines (3 rue Cassette, 75006 Paris) dedicates an exhibition to the images of Marilyn Monroe by Ed Feingersh, from 31 May to 5 October 2011.

CHAUMONT- The 22nd international poster and graphism festival is held from 21 May to 5 June 2011.

FONTAINEBLEAU -The first art history festival will be held at the castle of Fontainebleau, from 27 to 29 May 2011.

LONDON -The Frieze Art Fair of contemporary art has announced the birth of two new events: Frieze Master (in London), dedicated to the ancient and modern masters, and Frieze New York (contemporary art), to be held from 3 to 6 May 2011.

MADRID -The Rencontres internationales Paris-Berlin-Madrid, an international cultural forum, will be held in Madrid from 23 to 29 May 2011.

NEW YORK -The Yvon Lambert Gallery will present its last exhibition before closing, Playtime, from 20 May to 4 June 2011.

PARIS - L'Adresse Musée de la Poste presents Nils-Udo, an artist who turns Nature into pictorial and poetic matter. He has measured himself to the most diverse settings, from volcanoes on the island of La Réunion to the deserts in Namibia. This retrospective groups together over sixty-five works, created between 1973 and 2010, staged in a very refined way.