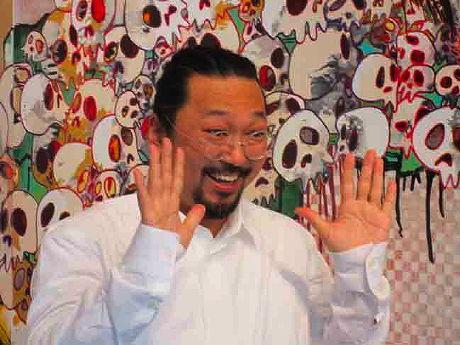 Takashi Murakami, 727-272 (The Emergence of God at the Reversal of Fate) (2008-09), acrylic and gold leaf on canvas mounted on wood. Photo: Marjorie Och (at the Fondation Pinault, Venice).

VENICE  The 54th Biennale of Venice will open to the public on 4 June. As in each edition, the war of figures will be an essential dimension: this year's program, supervised by Bice Curiger, editor in chief of the art review Parkett, will host 83 artists in its main exhibition, Illuminazioni. Equality is not the rule as men remain in great majority (51). As for the national pavilions, it's an explosion: there are 89, i.e. 22 more than two years ago. And this after recording the last minute cancelations by Bahrein and the Vatican, in spite of the excitement that their arrival caused. India, absent for the last three decades, is back while Saudia Arabia, Bangladesh, Haïti and Andorra will come for the first time. The Italian pavilion will most probably be the cause for discussions: it has been coordinated by the unpredictable Vittorio Sgarbi, a former minister and a troublemaker of culture, who always has a word to say about the state of contemporary art. As for the Venitian pavilion, it exhibits the association between video director Fabrizio Plessi and the «global» brand Louis Vuitton. There are many themes for discussion in embryo. But when will there be a Biennale without problems?
The Venice Biennale will be held from 4 June to 27 November 2011.

Our correspondents Preston Thayer and Marjorie Och send us the fourth of their dispatches about the 2011 Biennale.

EVIAN  Lichtenstein has always been known for being a tax haven or, in another, lighter sector, as the crib of a family of ski champions, the Wenzel brothers. For some time now, and mostly since the reopening of the Lichtenstein museum in Vienna, in 2004, the tranquil duché has recovered a reputation that suits it just as well  that of a unique art centre with an exceptional princely collection, enriched uninterruptedly from the Renaissance up to our day. Following the aborted exhibition in London last year, a few of its finest samples have finally travelled to us. The palais Lumière presents some one hundred works, among them Bruegels, Rembrandts, Rubens and Canalettos, some of them in large formats, and a beautiful selection of Amerling, the leading artist of the Biedermeier. But there are sculptures as well  and, the least expected part of the exhibition  furniture with a sumptuous cabinet in de pierres dures by Melchior Baumgartner.
 Splendeurs des collections princières du Liechtenstein at the palais Lumière, from 4 June to 2 October 2011.

Sculpture of the future

LONDON  What will the sculpture of the future look like? Figurative? Abstract? Monumental? Microscopic? Probably a little of everything at the same time. In any case that is the thought that results from the assessment drawn up by the Saatchi Gallery, as it combines David Batchelor's television screens and polyurethan foam constructions by Sterling Ruby, Peter Buggenhout's dust mountains or Martin Hornet's realist and gigantic characters. It is said that the general pubic no longer likes sculpture. Actually, as soon as it takes on the aspect of spectacular installations, it impresses, raises problems (we can see that in Versailles with Bernar Venet) and attracts visitors. This equation should allow the Charles Saatchi gallery to near its impressive attendance figure of the past (over 550 000 admissions for British Art Now in 2010).
 The Shape of Things to Come: New Sculpture at the Saatchi Gallery, from 27 May to 16 October 2011.

MADRID  During the years prior to and following the Revolution, Russia experienced unique creativity: Rayonism, Suprematism, Constructivism shattered the foundations of classic art and opened the door to artists such as Malevitch, Lissitsky, Tatlin, Rodchenko or Gontcharova. The links between art and architecture are stronger than ever before: buildings are made far from «bourgeois aesthetics», in which privilege is given to pure forms. The photographs of that time, the large, recent models (the monument to the IIIrd International movement by Tatlin, the Roussakov club and his own house, by Melnikov) prove it here in a dialogue with the paintings and drawings. Once again, the Costakis collection, grouped together in the 1960s by a learned embassy attaché in Moscow, is the base for this exhibition. It is presented permanently at Thessalonica, and includes the most famous names of those decades. The fund is completed by loans from the museum of Architecture of Moscow, and the aim is to show that at that time, to change the world one had to through architecture as well as through art.
 Construir la revolución, arte y arquitectura en Rusia 1915-1935 at the Caixa Forum, until 18 September 2011.

 BASEL  Artist Francis Alÿs is obsessed by Roman saint Fabiola, the patron of divorcees. He has repeated her image to infinity in an exhibition presented at the Schaulager foundation out of the walls (Haus zum Kirschgarten). Until 27 August 2011. From 2 tou 5 June, all "Fabiolas" will benefit from free admission.

 BRUSSELS  Bozar presents four decades of landscape photographs signed by Jeff Wall, put face to face with works that inspired him. From 27 May to September 2011.

VENICE  Under the long title of Permanently becoming and the architecture of seeing, the Correr museum dedicates a retrospective to Julian Schnabel. From 4 June to 27 November 2011.

At the time of the daguerréotypes

PARIS  The further back we go in time to the beginnings of photography, the more expensive the photographs. This rule is not perpetual but can be confirmed in the estimates of this sale of ancient photographs. The daguerréotypes by Choiselat and Ratel, from 1844 (the church of Saint-Sulpice in Paris), are estimated up to 50 000 . A beautiful view of Baalbeck by Gustave Le Gray, done in 1860 then colored with oil painting is expected to go for 25 000  and the impressive Palace of the Nuns at Chichén-Itza by explorer-adventurer Désiré Charnay at 20 000 . We will also admire superb studies of flowers by Adolphe Braun and Charles Aubry and even stranger things, such as a cadaver set up for a Crucifixion (by Adolphe Braun, 2000 ) or Gaudi placing five miserable models attached to a column in order to visualize the Passion of Christ
 Photographies du XIXe siècle, collection Pierre-Marc Richard 8 June 2011 at Drouot-Richelieu (SVV Beaussant-Lefèvre).

Michel Rovner: another view of the Near East

After Tony Craggs large blocs, the Louvre, which increasingly opens its doors to contemporary artists, honors Israeli artist Michal Rovner (born in 1957). Her installations have an obvious political dimension. In the room of Oriental antiquities she adds a stratus to History by projecting her images on steles and sculptures that are three thousand years old. In the Napoleon court, her two ephemeral buildings have a very symbolic meaning: they were built by masons of all communities, using stones from abandoned homes in the West Bank, in Gaza or in Jerusalem. The result is not too far from that produced by her Petri boxes, in which we saw the micro-organisms that moved about only after a long period of observation: stepping back, putting a certain distance between us and the object render more incomprehensible and absurd the resort to human violence.
 Michal Rovner at the musée du Louvre until 15 August 2011.

A century of Gallimard

In 1911 the Editions de la Nouvelle Revue française came to be. A man-orchestra was at the helm, the one who would give his name to the new publishing house, Gaston Gallimard. One hundred years after its foundation, Gallimard remains the number one independent publishing house in France and it displays a unique fund of 40 000 titles. The catalogue that accompanies a retrospective at the Bibliothèque nationale de France until 3 July 2011, aims at being a photo album (from André Gide to Le Clézio, without forgetting Foucault and Modiano), a historic summary (the development towards the international market, the adventures of Temps modernes and the Pléiade, etc. ) as well as an interpretation manual  with in particular facsimiles of fascinating reading cards signed by Malraux, Queneau or Camus or lists of titles for works being translated. For Gone with the wind by Margaret Michell, Jean Paulhan gets the top award for his implacable Autant en emporte le vent
 Gallimard, 1911-2011. Un siècle dédition, directed by Alban Cerisier and Pascal Fouché, Gallimard, 2011, 408 p., 49 .

 BARCELONA The Palau Guell, one of the first works by Antoni Gaudi, was opened again to the public on 26 Mai 2011 after 7 years of restoration.

 CAIRO  According to the BBC, which co-financed the research, satellite images by the NASA seem to reveal the existence of 17 pyramids buried in Egypt.

 NEW YORK  The project for the future Whitney Museum, which will set up in 2015 in a building designed by Renzo Piano, was officially launched on 24 May 2011.

 PARIS  The Nocturne Rive droite event, with the opening of art galleries in the neighborhood of the Elysée until 10 PM, will be held on 4 June 2011.