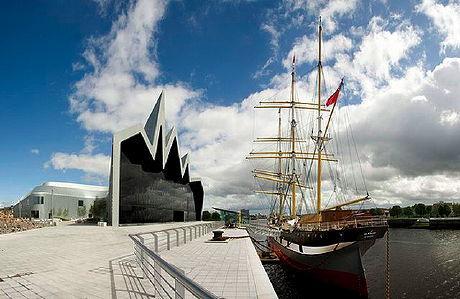 On 21 June the most awaited museum of the first semester of 2011 will be inaugurated, the Riverside Museum of Transport in Glasgow. The institution, in a new very high tech sheath, all with angles as is the habit with Zaha Hadid, awaits one million visitors per year. Of course it will offer the products with which Glasgow dominated the world  steam engines and locomotives  but will also bring back to life the atmosphere of the districts and means of transportation at the different periods of history. Five days later a very different institution will open its doors in Southern France: the musée Bonnard is the result of a project launched nearly thirty years ago. It is in Cannet where the painter spent many seasons that the hotel Saint-Vianney, a villa from the Belle Epoque, has been restored by the Ferrero-Rossi agency to host the budding collection. The cult for the machine or for color? According to ones tastes for the Futurists or the Nabis one will choose, but need not be exclusive

To know more about the musée Bonnard

Ten days after it opened, our correspondents Preston Thayer and Marjorie Och send us the last of their dispatches from the 2011 Biennale.

MARTIGNY - Monet was one of the blockbusters of the year 2011 by attracting over 900 000 visitors to the Grand Palais in Paris. The show is on again in Switzerland, at the Gianadda foundation, with an equally ambitious selection: 170 paintings that will be shown next to the artists collection of Japanese prints. While the musée Marmottan in Paris lent many works, the visit to Martigny is worth the trip for the selection of works from the Swiss collections, either public (such as the Kunstmuseum in Bern) or private (such as the Buhrle foundation). Certain paintings, from private collections, have not been shown since the painters demise.
 Monet au musée Marmottan et dans les collections suisses at the Gianadda foundation, from 17 June to 20 November 2011.

The Maya spirit in Guatemala

PARIS - They were one of the most brilliant civilizations of ancient times and the mystery around their disappearance continues to intrigue us: why did the Maya «evaporate» around the year 900, leaving behind them ruined cities in the jungle that fascinated the Europeans? Draught, food shortages and wars undoubtedly combined to cause their downfall. The collections from Guatemala give a wide idea of their art (but obviously incomplete: the codex, those books on the bark of ficus trees, were burnt by the Spaniards and the frescoes cannot be transported). This selection consoles us from the exhibition on the jade masks at the Pinacothèque that was cancelled (and which finally could be held in 2012). It is an initiation to the work on jade, to the extraordinary variety of ceramics (with the very particular «Maya blue»), to the flint «eccentrics», the limestone panels with glyphs, sculptures on alabaster, shell mosaics
 Mayas, de laube au crépuscule, les collections nationales du Guatemala at the musée du quai Branly, from 21 June to 2 October 2011.

TOULON  Images of Gödels theory on incompleteness? Graphics from Wall Street? Figures that represent equations, diagrams, the whole thing on graduated paper? All of these ideas seem very far from the Bernar Venet the general public knows, the one who plants steel volutes in the court of honor of the château de Versailles. And yet it is the same person as this retrospective of the artists painted work reminds us. A lover of formulas and equations since his beginnings, Venet (born in 1941) has transposed them for the past 50 years on canvas, first in a very austere manner, then, with time, has added color to them. Convex functions, saturations with 33 zeros, integrals: for once, mathematics can be appreciated in an original manner, without reviewing before
 Bernar Venet at the Hôtel des Arts, from 11 June to 18 September 2011

Do not miss: Bernar Venet in Versailles, until 1 November 2011

 PARIS  With Génération spontanée, the Centre Wallonie-Bruxelles will focus on the new generation of Belgian French-speaking cartoonists. From 16 June to 28 August 2011.

A farewell to the Beyeler collection

LONDON - Ernst Beyeler, who died in 2010 at the age of 88, was one of the great art dealers of the XXth century: statistics show some 16 000 works of art went through his hands during the 65 years of activity of his gallery in Basel, which he opened right after the war. A friend of Picassos, Giacomettis, Arps or Bacons, he participated to the foundation of Art Basel and with his wife Hildy created the fondation Beyeler, that sits today in a building designed by Renzo Piano. In order to reinforce it with solid capital, the collection is on auction today at Christies. A large version of Monets Nymphéas (2 meters large) and an oil painting by Picasso, Buste de Françoise (1946), could reach the highest bids, beyond 10 million , a nude by Renoir, a landscape of Tahiti by Gauguin, a Drapeau by Fernand Léger (1919) will follow close behind. The works by Toulouse-Lautrec, Klee, Calder or Baselitz that accompany them will give a clear idea of the precise taste Beyeler had and will confirm his place next to Kahnweiler, Duveen, Berggruen and others like Vollard
 Ernst and Hildy Beyeler collection at Christies, 21 and 22 June 2011.

François Cabrit, the intimacy of the forest

In these times of incertitude regarding the destiny of our natural environment, tree bark seems to be quite fashionable. Photographer Cédric Pollet left a great number of these tree skins, the fruit of a decade of travels through the world (Ulmer publishing house). Painter François Cabrit (born in 1953) has another approach as he dedicates his last series to it after having worked on street scenes, interiors or landscapes. Here he gives preference to tight shots that allow him to grasp the matter of the tree. To avoid reflections and rather than using oil, he turns to the old technique of tempera on canvas, reminiscent of the Renaissance (just like the perfect technique) to render the knotted, hollow, moss-covered, intertwined trunks.
 François Cabrit is presented at the galerie dEst et dOuest (1, rue Francis de Pressensé, 75014 Paris), until 2 July 2011.

While the Incas had no writing, the Mayas did. The deciphering of these hieroglyphic signs has been one of the great epigraphic adventures of the XXth century, with very original personalities, from Youri Knorosov, who initiated himself to the glyphs at the library of Dresden, while a soldier of the Red Army and who never travelled to Mexico, to David Stuart, who took the research leaps forward with his brilliant intuition at the age of 16, in 1981. This manual does not pretend to be a historic summary of this non-finished quest, but rather an initiation to the most frequent glyphs: how can one recognize them, what are their meaning and their symbolism, how can we associate them to the greater moments of life in the Maya city?
 Ecriture maya, by Maria Longhena, Flammarion, 2011, 180 p., 24,90 

LONDON -The traditional Summer exhibition at the Royal Academy of the Arts, which is held since 1769, is open from 7 June to 15 August. Considered as one of the most important exhibitions of contemporary art, it brings together more than one thousand works.

MEXICO - The collection of some one thousand works by Frida Kahlo, made public two years ago and which certain experts immediately found suspicious, has been recognized as being authentic by the Mexican justice.

PARIS - Designers Days, the «Parisian design itinerary», will be held from 16 to 20 June 2011, in some thirty different locations, on the theme «Conversations».