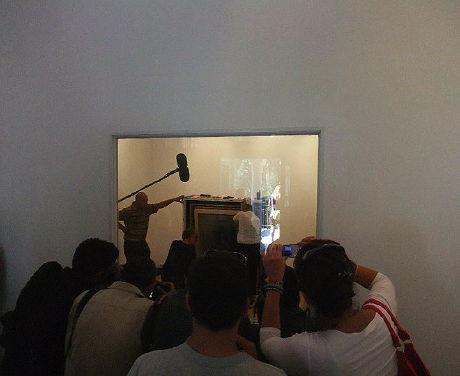 Ramallah, its Muqataa (headquarters of the Palestine Authority), its NGOs, the sarcophagus of Yasser Arafat, Rukab the ice cream parlor with its specialty of Arabic gum since 1941 and its Picasso. Just a few weeks from a possible vote at the UN regarding the recognition of the Palestine State, the current capital of the Authority wants to forget for a few moments the checkpoints, the identification documents, the 700 km long wall and dream of another «normal» future, a time when one could go see exhibitions like in Paris, London or Milano. Just to take a Picasso to Ramallah is almost seen as a performance in itself: the painting is on loan from the Van Abbemuseum and the whole journey, from Rotterdam to Tel-Aviv and then Ramallah, going through the famous checkpoint of Kalandia, was filmed for a future documentary. The Buste de femme from 1943 will be shown in the Academy of Fine Arts as of 24 June under close protection. Admission will be free: in a city with one single museum and one gallery of contemporary art (Al-Mahatta), the arrival of the first Picasso ever seen in Palestine is a national affair. If one could doubt this, just imagine that the football match on 29 June against Afghanistan for the qualification for the next World Cup has been totally eclipsed
 Picasso in Palestine at the International Academy of Art Palestine, from 24 June to 22 July 2011.

The website of the International Academy of Art Palestine

LONDON - During the Middle Ages, in the same way as salt, silk or alum, religious relics were one of the most profitable businesses. These precious elements, supposed to protect against all evils and give a touch of prestige to their owners, these bones of saints, thorns from Christs crown, be it drops of the Virgins milk, all needed elaborate reliquaries, some real works of art in some cases, with gold work like that of saint Baudime, which will be exceptionally leaving Saint-Nectaire. The British Museum grouped together a large choice, including those of Saint Marc (in Venice) and of Saint Thomas Becket (in Canterbury). As a consequence for the appetite during the medieval era for those «good luck charms», they multiplied in an unusual manner: certain popular saints had various arms or multiple teeth, spread throughout all of Europe
 Treasures of heaven at the British Museum, from 23 June to 9 October 2011.

On the road to Winnipeg

PARIS - Winnipeg, the most improbable destination for a pleasure trip  It is in the midst of the great Canadian plains, and one suffocates with the summer heat and freezes with the polar winter when the North wind blows. And yet things are always happening in the capital of Manitoba, and this very original exhibition in the Maison rouge is out to prove it, the first of a series that is interested in the outskirts and not the capitals of contemporary art. Those who saw Winnipeg mon amour, Guy Maddins movie where there is spiritualism, old men playing hockey, a big escape of buffaloes, horses caught in the ice like in Malapartes Kaputt, will easily imagine the capacity of delirium and invention this cereal metropolis has. Whether in painting, video or installations, the artists presented are here to prove it: well-known Marcel Dzama as well as Wanda Koop, Bonnie Marin, Paul Butler and his Collage Parties, Guy Maddin with a series of new short films and many others.
 My Winnipeg at the Maison rouge from 23 June to 25 September 2011. The exhibition will be presented at the Miam in Sète from 5 November 2011 to 20 May 2012 then at Plug-in ICA in Winnipeg during the summer of 2012.

SÈTE  He is one of the best known representatives of «synthetic» cubism, the second phase of the movement launched by Braque and Picasso. Born in a large family in Madrid, José Victoriano González-Pérez (1887-1927) settled in Paris in 1906 and then took up his pseudonym. There eh worked in satirical magazines like lAssiette au beurre. The exhibition does not delve on his beginnings: it starts with a Livre from 1911, and focuses on the artist when he enters the cubist brotherhood to which he gave a much more luminous (putting aside the grays and browns in favor of livelier colors) and architectural touch. The exhibition, that includes some fifty paintings, gives special attention to the «plastic rimes», works from 1920-25, in which he uses the correspondences of forms between very distinct objects.
 Juan Gris, rimes de la forme et de la couleur at the musée Paul Valéry, from 24 June to 31 October 2011.

 CAEN  The Musée de Normandie looks closely at Russie viking, by showing the analogies between Scandinavian migrations towards Novgorod and the birth of Normandy. Du 25 juin au 31 octobre 2011.

 LAUSANNE - The Fondation de lHermitage is presenting nearly 150 works from the Hahnloser collection that includes many master pieces from the beginning of the XXth century. From 24 June to 23 October 2011.

 LIVERPOOL  The Tate Liverpool is dedicating an ambitious retrospective to René Magritte with some one hundred paintings done between the twenties and 1967. From 24 June to 16 October 2011.

CHEVERNY- The annual sale at the castle of Cheverny is always the summit of the season for the Rouillac auction house (which has just set a world record for a photograph by Gustave Le Gray). There were some very high bids, the highest one was in 2002, for a portrait of Washington by Charles Wilson Peale (4.4 millions ). This year will keep up the tradition: 402 lots will be put up for sale in two days with a very wide spectre of specialties, from Aubusson tapestries to bronzes by Pierre-Jules Mène, from Islamic art to Georges Méliès. Among the strong points, an ensemble of Art nouveau glasses, a manuscript from Andaluzia from 1295, the colossal map of France drawn up by Cassini in 185 leaflets during the times of the Lumières, a surprising anatomic votive bust from Rome in the IIth century B.C. and last but not least a series of twenty drawings by Giacometti. The latter date from the 1930s, were offered by the artist to Tériade, his life-long friend, and are variations on Egyptian busts from the Louvre or on the Crucifixion by Cimabue.
 Auction at the Orangerie of the castle of Cheverny (SVV Rouillac) on 26 and 27 June 2011, Rouillac.

A few spots in the world are linked for ever to the name of photographer Bernard Plossu (born in 1945), who discovered his vocation during a trip across the Sahara desert with his father in the fifties. There is Mexico, the West coast of the United-States, black Africa and the desserts. But this roaming photographer, known above all for his wide angle color photographs and capable just as well of expressing himself in black and white, does not like reserved areas. His taste for travelling can lead him to peak into his familys intimacy, in the buses in Marseille or events linked to faith around the Mediterranean basin. In this exhibition, his trips to unexpected places Murcia, Lublin, the Montsouris park, Vitré or Antwerp - is accompanied by poems by Juan Manuel Bonet, another great world traveller, who was the director of the IVAM in Valencia and the museum Reina Sofía in Madrid.
 Bernard Plossu is shown in the context of the Photo España event at the José R. Ortega gallery (Villanueva 42, Madrid) until 14 July 2011.

Lorrain, the champion on paper

We all know Claude, aka le Lorrain, and of course his large landscapes or the ports under a beating sun. We hardly know his drawings, which he is said to never like to be separated from, even when asked by higher instances (a letter to cardinal Leopoldo de Medici in 1662 proves this). The catalogue that accompanies the exhibition at the Louvre (based on the collection of the Parisian museum and that of the Teylers museum in Harlem, the oldest public museum in the Netherlands) shows us a very wealthy fund. The artist was fascinated by tree trunks, leafage, clumps of grass and rendered them with remarkable science. Le Lorrain had great control of various sophisticated techniques, and played with his knowledge of the supports (ivory or blue paper, fluted paper, etc) and instruments (black stone, Cumberland graphite, brown ink). The analysis shows he used watermarks in his compositions and knew how to foresee oxidation of metallo-gallic inks (brown but turning to black with time). A real subject for meditation: how, three centuries before the computer and Illustrator, could he produce such a variety of effects?
 Claude Gellée, dit le Lorrain, Le dessinateur face à la nature, directed by Carel van Tuyl van Serooskerken and Michiel C. Plomp, coedited by Somogy / Louvre museum, 2011, 312 p., 29 .

CUPERTINO (California)  Steve Jobs has unveiled a project to extend the headquarters of Apple, in the shape of a flying saucer

LONDON  The restoration of the cathedral of Saint-Pauls, that started 15 years ago for a cost of 40 million £, has symbolically ended on 21 June 2011, for the buildings 300th anniversary.

LONDON  The British Museum received the Art Fund Prize 2011 (100 000 £) for its television series over BBC A history of the world in 100 objects and for its use of new technologies.

MELLE (France)  The Vth international biennale of contemporary art will be held from 25 June to 18 September 2011, and will be called «Habiter la Terre» -Living on Earth.

TURKU (Finland)  The Biennale of contemporary art of Turku will present until 5 October a selection of international artists on the theme of «Thinking Schemes».

BRUSSELS -The Musée du Cinquantenaire will inaugurate a new room dedicated to small precious and elegant accessories  candies boxes, boxes for beauty spots or hand fans  which in the XVIIIth and XIXth centuries were true fashion phenomena. Another area is dedicated to five centuries of glass design.