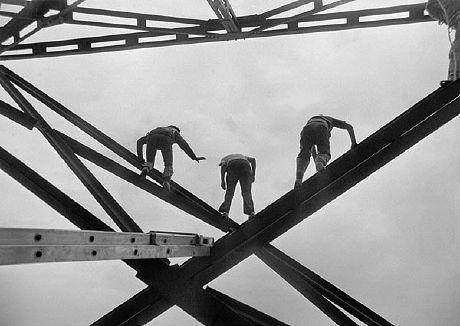 Enrique Metinides, Untitled, Torreo Stadium, Mexico City, 1971. "I wanted to know what death was like," admitted 45-year old Antonio N. after two rescue workers, persuaded him not to jump. Courtesy of the artist, © Enrique Metinides, Mexico.

The famous invasion of Arles by the Mexicans

ARLES  Relations between France and Mexico, which were not exactly cordial since the Cassez affair and the cancellation of the Year of Mexico in France, did not risk getting any warmer with the duel for the head of the International Monetary Fund, the result of which has just been unveiled. Fortunately, art allows us to overcome many a misunderstanding  The photo festival at Arles, Rencontres de la photographie, has proved it by maintaining their original program: a tribute to Mexico! Next to strong photos of the Revolution, we will also be attracted by reports by Maya Goded on the frontera, by the extraordinary career of Enrique Metinides, who has constantly been on the heels of news events for the last fifty years, or by the amazing rediscovery a few years ago, finally visible in its entirety: Capas «Mexican suicase» with 4500 negatives on the Spanish Civil War by the famous reporter as well as by his companion Gerda Taro and Chim, the cofounder of the Magnum agency. Everyone thought it was lost forever, and it reappeared miraculously in Mexico. Viva Mexico!
 Rencontres dArles, from 4 July to 18 September 2011 (47 exhibitions accompanied by various debates, encounters, displays).

BRUSSELS -Where does contemporary Polish art stand today? That is precisely what Bozar wishes to investigate, at the time of the 6-month Polish presidency of the European Union (as of 1st July 2011). While Pawel Althamers wild performances or the sculptures of Miroslaw Balka (who was the object of an exhibition at the Turbine Hall of the Tate Modern in 2009) are known beyond their borders, it is not the case for most of the artistic scene, which has undergone many upheavals over the last two decades, from the fall of Communism to the entrance into Europe. Under the aegis of the great Bruno Schulz and Tadeusz Kantor, many of the artists shown (Maciej Kurak, Marcin Maciejowski, etc.) are ironic and enjoy the absurd. To prove that new practices also exist in Warsaw, Kracovia and Lodz, graffiti artist Mariusz Waras created a fresco for this event.
 The Power of Fantasy at Bozar until 18 September 2011

MADRID - Antonio López (born in 1936) is the big attraction this summer, and the exhibition of his work at the Thyssen-Bornemisza museum puts an end to a sixteen-year wait. Considered as the last of the great Spanish realist painters, López draws his subjects from every day life: a refrigerator, a bathroom, an empty lot, a quince tree in the garden. He is capable of setting his easel for days on end in the middle of the Gran Vía, he has created urban landscapes of a rare density in delicate colors (during the sixties he was in charge of preparing the colors at the San Fernando academy, in Madrid). He is also the creator of sculptures among them a nude couple that created quite a buzz at its presentation during his previous retrospective at the Reina Sofía museum and that required decades of work and of regrets (1968-1994). Nearly 200 works are presented, covering half a century of activity.
 Antonio López at the Thyssen-Bornemisza museum, from 28 June to 25 September 2011.

Chillida, a man of steel

ST PAUL DE VENCE - It is a story of loyalty: Antonio Chillida (1924-2002) was the youngest artist exhibited at the moment of the inauguration of the fondation Maeght in 1964. Nearly half a century later, after he himself has passed away and that his sculpture park in the Spanish Basque country has run into difficulties (after opening in 2000 near San Sebastián, it has been closed to the public since 1st January 2011), this great friend of the Maeght family will benefit from a large retrospective in 150 works. Of course we will admire the monumental iron Steles and Anvils by the «sculptor become blacksmith» (according to Gaston Bachelard), who always granted great importance to creation for public spaces. But there will also be all the other facets of his art: drawings, special clay, wood reliefs, stone Torso, Hommage to the sea in alabaster including the drawings of the last years, baptized Gravitations, cut-out inks on paper.
 Antonio Chillida at the fondation Maeght, from 26 June to 13 November 2011

 BARCELONA - Devour Paris is the title chosen by the Picasso museum to exhibit the Spanish artists triumphant campaign on French soil from 1900 to 1907. From 1st July to 16 October 2011.

 LEWARDE (France)  Mines that so marked the French landscape in the North, in Lorraine, be it even in the Provence (Carmaux)  are only a distant souvenir. At the Centre historique minier, Esprit mine brings them back to life with works of art inspired by this universe, from Augustin Lesage to Bertille Bak. From 1st July to 31 December 2011.

PARIS  Vacations are around the bend, and so are the expenses that go with them  What auctions allow us to have some pleasure for a small price? The ones at the Coutau-Bégarie study, dedicated to cloths and painted paper, easily enter this category. While one can foresee nearly 5000  for the wealthiest lots (a woven book of hours and a series of mans buttons from the XVIIIth century with miniatures on copper), most of them will be accessible for ten or one hundred times less. Four-leaved Japanese screens from 1930, hand fans from 1900, feather hats from the Printemps could fetch in the tens of Euros. With this one can create decors or costumes for a modest price. The secularization of society renders affordable chasubles from 1900 or  an accessory now considered exotic - statue capes from the end of the XIXth century. This can also be an opportunity to refurnish ones interior with rolls of Nobilis wall-paper with exotic bird motives or with «Chinese» motives inspired by Pillement. An economic world tour prior to the large summer exodus
 Etoffes, papiers peints et costumes anciens 1st July 2011 at Richelieu-Drouot (Coutau-Bégarie SVV).

From Supports/Surfaces to Matisse François Rouan, born in 1943, was first known for his shared thinking with Viallat or Dezeuze, animators of the Supports/Surfaces group, who questioned the traditional canvas. He created his own technique called weaving, in which he combined paper strips to be used as the weft and the warp, and he never ceased being close to artists such as Matisse or Hantaï. The former was an important influence from his very first «cut out papers» from 1965-66. Forty years of evolution, during which video, photography, drawing are now combined, show that the figure, without ever being totally recognizable, is increasingly hidden in complex combinations of colors and cut-outs.
 François Rouan is shown at the musée départemental Matisse (at Cateau-Cambrésis), from 3 July to 18 September 2011.

Everyone knows Laurent, the young minister prodigy under Mitterrand and then President of the National Assembly. Yet, for a long time, among the Fabius family (a patrimony chosen at the beginning of the XIXth century, at a time when Jews in France had to register at the Registry Office) it was his grandfather Elie who was the best known. This antique dealer born in 1864 and dead in 1942, just in time to see his «Aryanised» and its fund scattered at Drouot, lay the foundations of a dynasty of merchants that continues to work at 152, boulevard Haussmann. The book reviews the major moments of this business, marked by a special taste for the XIXth century and a real rediscovery of the Second Empire  Elie Fabius was especially remarked at the Farnborough sale in 1927, when he scattered the goods of Empress Eugénie. Barye, Carpeaux, Winterhalter are some of the names he specialized in, next to souvenirs of Napoleon or La Fayette. In 1974, the sale by one of his descendents of a Madeleine by Georges de La Tour to an American museum caused a minor revolution and he was accused of giving away the national patrimony The book is an indispensable complement for all spectators of the sale of the Fabius fund, on 26 and 27 October 2011, in Paris, through the intermediary of the Piasa and Sothebys houses.
 Un marchand entre deux Empires, Elie Fabius et le monde de lart by Olivier Gabet, Skira Flammarion, 2011, 160 p., 35 .

BRUSSELS  San Sebastián, in Spain, and Wroclaw, in Poland, have bee named European capitals of Culture 2016.

PARIS  The Unesco has registered 25 new sites on the list of the world patrimony, among them the cathedral of León in Nicaragua, the landscapes of the Causses in France or the Fagus dAlfeld plant in Germany.

BEIJING  According to information published on the BBC website, Chinese authorities would impose 1.9 million $ as a tax adjustment on artist Ai Weiwei.