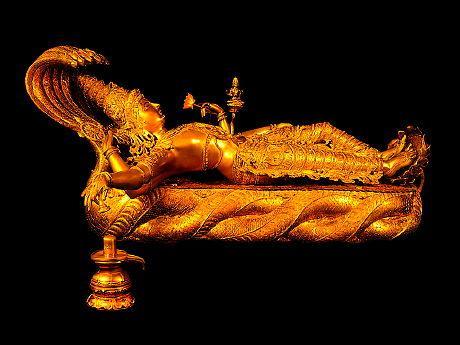 One of the golden statues in the temple. Courtesy Sree Padmanabhaswamy Temple, Thiruvananthapuram, Kerala, India.

Our next issue will appear on 8 September 2011. Enjoy the Summer!

Summer is always a good time for treasure hunts. Who has never found a coin on the beach? Who has not heard about the treasure of Staffordshire and its superb Anglo-Saxon gold work, unveiled in 2009? Certain companies are specialized in this sort of exciting search, among them the best known is the American company Odissey, whose ways are often contested. It was the one to discover the Spanish galleon Santa María de las Mercedes, sunk in 1804 by the English along the coast of Gibraltar, and its 17 tons of gold and silver coins (a discovery that lead since 2008 to an endless trial with the Spanish state). But sometimes all you have to do is push a door to find a lot more. That has just been the case in Thiruvananthapuram, the capital of the State of Kerala, at the temple of Sree Padmanabhaswamy, dedicated to Vishnu. A judge ordered the descendants of the maharajah of Travancore, «guardians of the temple», accused of insufficient security, to open rooms that had been closed for nearly a century. The statues in solid gold, the coconut shells decorated with precious stones, have been evaluated at nearly 20 billion Euros. And there is still a room left to be opened

A voyage through illuminations

PARIS  The Bibliothèque nationale de France and the Louvre museum have inaugurated on the same day two exhibitions with similar themes: the first focuses on the art of illumination in Islam while the second studies the respective masterpieces in the Western world. The gap is obvious: on the one hand the human figure, not on the other. Actually, the divide is not that clear. Christian copyists created superb abstract or floral motifs and their Mohammedan counterparts produced manuscripts dedicated to poetry, to history, to the epic, full of individuals, as the interdiction only applied strictly to religion. These two exhibitions allow the two institutions to show off their respective collections: 70 illuminations, of which some by Lorenzo Monaco or Jean Fouquet at the Louvre, against 87 Arab, Persian and Turk manuscripts at the BnF.
Enluminures en terre dIslam at the Bibliothèque nationale de France, from 7 July to 25 September 2011.
 Enluminures du Moyen Âge et de la Renaissance, from 7 July to 10 October 2011 at the Louvre museum.

The exhibition at the BnF.

The exhibition at the Louvre

BARCELONA  The Belle Epoque? Those mind-blowing years before the cataclysm of World War One. People danced, drank, dressed sumptuously, raced in Bugattis, went to the seaside  What we all remember from those years is the birth of Cubism, with Picasso and Braque or the first steps of Futurism, under the baton of Marinetti, and even Surrealism. Actually, overshadowed by these movements there were others that were highly more appreciated, such as la society painting. The role of the artists shown at Caixa Forum was similar to the one played by today by magazines such as Gala, Gente, Ola, OK or Hello! They give an ideal, appetizing, distinguished image of stars and royalty. The choice shown was made starting with the best interpreters: from Sorolla to Toulouse-Lautrec, from Steinlen to Sargent and Serov, we drift among some of the best interpreters of portraits in the XXth century.
Retratos de la Belle Epoque at the Caixa Forum, from 20 July to 9 October 2011.

A Summer with the dinosaurs

PARIS  Who would like to stand in front of a 6 meter tall, ill-humored tenontosaurus, ready to whip any jokers with its powerful tail, like a steel rod? Or in front of the suuwassae emiliae, also known as diplodocus with a long neck, an 11-meter tall monster? They say he eats grass, but one never knows  Or even in front of these flying reptiles with a 4 meter-wide wing span? Actually, these encounters are quite possible: these fossils are in an exceptional state of conservation and will be put up for auction at Sothebys this fall (14 October). They are being exhibited at the Institut de paléontologie humaine. The foundation we owe to Albert I of Monaco will open its doors exceptionally to present these creatures, some of which have been dug up very recently (in 2008 and 2009), in the setting of an amphitheater with Art nouveau hinges newly restored.
 Trésors de dinosaures at the Institut de paléontologie humaine, from 1 July to 15 September 2011.

 BRUSSELS  Victor Hortas masterpiece, the hotel Aubecq, did not survive the expansion of the city in the 1950s. This original exhibition, that brings it back to life at the Musées royaux des beaux-arts, based on plans and elevations, also includes a visit of the warehouse where its dismounted façade is kept. From 1st July to 9 October 2011.

 GIVERNY  Following a Roman visit, the sumptuous Collection Clark is settling down at Monets for the summer. The choice is surely not accidental: the rich ensemble brought together by an American couple in the 1930s is very wealthy in Impressionist works and feels very much at home at Claude Monets. From 12 July to 31 October 2011.

 MADRID  How can one see Leonardos Lady with an ermine without going to Cracow? It is possible at Palacio Real, where a retrospective on Polish culture, Polonia, includes furniture, paintings, tapestries, books, coins Until 4 September 2011.

 MONACO  What decor did the monarchs of the past live in? At the Grimaldi Forum, Faste et grandeur des cours en Europe bases its presentation on some 700 loans from all over Europe to present twenty courts on the continent, from John III Sobieski to Napoleon and Josephine, from Victoria to Leopold Ist, king of the Belgians. Of course, it includes the Grimaldi familyFrom 11 July to 11 September 2011.

 NOTTINGHAM  It is England who is offering a special exhibition for the centennial of Jean Genets birth. This much awaited event at Nottingham Contemporary brings together installations, archives and contemporary works. From 25 July to 4 September 2011.

 PARIS  They are two of the most eminent representatives of the Renaissance in Northern Europe. In Cranach et Dürer graveurs, presented at the Petit Palais, their virtuosity in prints are put face to face. From 19 July to 13 November 2011.

Art on the French Riviera

Each year, in July and August, newspapers try desperately to teach us how to «suntan intelligently». On the French Riviera, in 2011, the problem seems to be solved as a major festival, «Lart contemporain et la Côte dAzur» will allow us to look at Nice, Menton or Antibes from another angle. From «Sculpture autrement» to the Eco-parc in Mougins to «Coaraze à ciel ouvert», the hinterland also takes part in the event that will show a wide selection of artists who have found in the South the ideal location to develop their creation since the period after World War II. Arman, Ben, Robert Filliou, Henri Goetz, Picasso as well as contemporary artists, such as Céleste Boursier-Mougenot or Frédéric Nakache, are part of this squadron of 300, presented in some fifty different locations.
 La Côte dAzur et lart contemporain until November 2011.

 ARLES - The Rencontres photographiques and their 47 exhibitions are dedicated to Mexico this year, with a few exceptions such as Chris Marker or the 30th anniversary of The New York Times Magazine. Until 18 September 2011.

 BRETAGNE - The Chemins du patrimoine (Roads of Heritage) in the tip of Brittany offer a program of contemporary art over five sites, from the abbey of Daoulas to the manor of Kernault. Until the end of October 2011.

 FRANCE - The Monuments nationaux are adding an animal touch to 35 castles, abbeys and other sites with Monuments & animaux that includes Marie-Antoinettes lambs as well as Buffons monkey. Until 16 October 2011.

 MADRID - The PhotoEspaña festival offers a very wealthy program with 68 exhibitions, from Lartigue to Ajo, who did the portrait of the Madrid of «la Movida», including Thomas Ruff and Chema Madoz, who was rewarded the prize for 2011. Until 24 July 2011.

In the field of patrimony, the stories of despoilment by the Nazis during World War II have been largely developed and commented over the last decade. An original book has just come out, renewing the genre. Rather than recalling the atrocities of which his ancestors were the victims, Edmund de Waal, a descendant from major wheat traders - the Ephrussi from Odessa -, who then settled in the main European capitals, chooses to present the subject sideways. He followed the destiny of a small part of the collection, the one of the Japanese netsuke (small sculpted objects in wood or ivory, carried in the belt of the kimono), bought towards 1870 in Paris, miraculously saved from raids at the end of the thirties in Vienna, and of which he is today the last depositary. Through these objects he sheds light on a highly perfected system of dispossession. This well-built investigation is even more touching since it does not play with nostalgia and does not use the usual quantitative criteria on the number of famous works or their value in dollars
 La mémoire retrouvée, lincroyable destin de la collection Ephrussi by Edmund de Waal, Albin Michel, 2011, 416 p., 23 

AMSTERDAM  The Van Gogh museum will close from October 2012 to the spring of 2013 for modernization works.

LONDON  The temporary pavilion of the Serpentine Gallery, entrusted this year to architect Peter Zumthor, opened on 1 July 2011.

PHILADELPHIA  The Barnes Foundation, the statutes of which purposely forbid the collection to move, is going to leave the Philadelphia suburbs and move downtown. The historical site is planned to close this week-end.

VATICAN  The preparatory cartons for the frescos of the chapelle du Rosaire in Vence by Matisse, offered in 1980 to the Holy Siege by his son, gallery owner Pierre Matisse, will enjoy a permanent exhibition room a the Vatican museum.