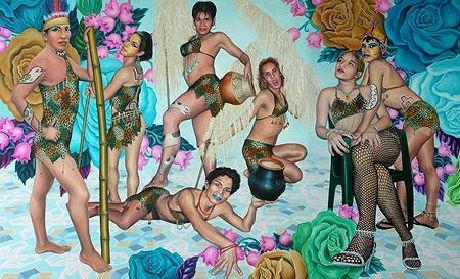 They are held every two years, but we are overwhelmed every year  That is precisely the paradox of biennales: their unlimited success gives way to new ones constantly. No Liverpool nor Dakar nor Busan this year. Yet the program is rich and practically impossible to cover. While Venice is well on its way since June, this week we will see inaugurations by throngs: the Biennale of Lyon (15 September), that of Istanbul (17 September), the one of Thessaloniki (18 September) and, later on, that of Curitiba in Brazil (18 September). The first declares «an amazing beauty is born» and presents 78 artists over 13 000 m2. The one in Curitiba wishes to go «beyond the crisis» with 71 artists. While Europe slips yet deeper into its apathy, these events sound like the baton is being passed on: most of the commissars are from South America (Argentine Victoria Northoorn at Lyon, Brazilian Adriano Pedrosa and Costa Rican Jens Hoffmann in Istanbul, Paraguayan Ticio Escobar in Curitiba) and wish to refresh the landscape of contemporary art. We will be able to discover creators from Zimbabwe, from Nigeria, Ecuador or Palestine, from Greece or Turkey, unaccustomed to being in the limelight.

Biennale of Thessaloniki, 18 September to 18 December 2011

LONDON - Degas and ballet? The subject seems to be more than over hashed, as the little rats of the Opéra and the pointe exercises seem an integral part of the painter. And yet the Royal Academy presents this exhibition as something unique. The aim was not only to bring together major works that have rarely been shown (85 in total, from major museums and a few private collections) nor to group together important ensembles (the very scandalous Danseuse de 14 ans (14-year old dancer) is surrounded by a rich series of preparatory studies). The aim was above all to show that Degas was not an opportunist who repeated to no-end a subject that sold well, but rather an artist who experienced and who closely followed all the revolutions of his time: he was very inspired by photography and cinema, as we can see in the rapprochements with the series by Muybridge and the films by the Lumière brothers.
 Degas and the Ballet: Picturing Movement at the Royal Academy of Arts, from 17 September to 11 December 2011.

Giacometti and the Etruscans

PARIS  Prior to its opening, the exhibition presented at the Pinacothèque was already surrounded by an inflammatory halo. Specialists have been a little leery be it furious- by the link created between the two. They feel that to show Alberto Giacomettis bronzes next to the votive statuettes of the Etruscans done two thousand years earlier, is practically deceiving. It leads the public to abusive simplifications, to erroneous conclusions; for example, that Giacometti was nothing more than a copycat, that he invented nothing and that he limited himself to reproduce. There is no doubt some sincerity in this harsh reaction. But the whole interest in this rapprochement lies precisely in this controversy. If, precisely, the general public is stunned by the similarity in the forms (as they can be if they visit the Guarnacci museum in Volterra when they discover these millenary ex-voto), it proves there really is something permanent, thatnot withstanding the individual genius- the forms reappear through time. «History is an endless beginning , Thucydides liked to say. And what about art?
 Giacometti et les Etrusques at the Pinacothèque de Paris, from 16 September 2011 to 8 January 2012.

 FERRARA  A perfect period, a unique moment of creativity, of licentiousness, of luxury: those were the Années folles in Paris,(The Roaring Twenties) examined at the Palazzo dei Diamanti with its collection of works by Modigliani, Léger, Delaunay and Picasso. From 11 September 2011 to 8 January 2012.

 NEW YORK  The MoMA dedicates the most ambitious retrospective to date to the work of Willem de Kooning. From 18 September 2011 to 9 January 2012.

 PARIS - The Musée d'Orsay focuses on a similar period and a similar theme with Beauté, morale et volupté dans l'Angleterre d'Oscar Wilde that brings together works by the Pre-Raphaelites, by Whistler and Beardsley. From 13 September 2011 to 15 January 2012.

 PARIS  Teddy bears, rocking horses or Japanese Robosapien robots? In Des jouets et des hommes (Of toys and men) at the Grand Palais, is the complete review of the history of Western toys. From 14 September 2011 to 23 January 2012. The exhibition will then be taken to the Helsinki Art Museum, from 21 February to 20 May 2012.

 PARIS - For its 3rd edition, Photoquai, the Biennale of the images of the world, presents 46 photographers from 29 countries at the Musée du quai Branly, on the banks of the Seine river and in various institutions. From 13 September to 11 November 2011.

PARIS - Hervé Télémaque is one of the main artists of the narrative figurative movement. He «looks into» the forest canopy, the roof at the top, where most of the leaves are developed and where a hoard of still largely unknown insects lives. The title reveals not only his thoughts about Nature and ecology but also serves him as an alibi to develop works that follow a logic of levels and segmentation that reminds us of stained glass or kaleidoscopes. These acryclic works on canvas, done over the last few years (since 2005), as well as the drawings on paper are essentially abstract but also feed on a few figurative «inclusions».
 Hervé Télémaque, la Canopée at the galerie Louis Carré, from 9 September to 10 October 2011

And more in the galleries in Paris...

 Hamish Fulton, a highly-skilled walker, completed an order from the galerie Torri and crossed the Mercantour Natural Park during the Summer solstice of 2011 and used its contents for this exhibition. From 10 September to 8 October 2011.

 The galerie Baudoin Lebon inaugurated on 6 September 2011 its new space located 8, rue Charles-François Dupuis (75003), with a collective exhibition of the winners of the HSBC photography awards.

 The galerie Melki had remained closed since 1993. It reopened on 2 September 2011 at 75, rue des Saints-Pères, in Paris and will present its first exhibition, dedicated to Clément Rosenthal, as of 22 September 2011.

Nannetti, the mad poet of Volterra

This week-end, the Journées du patrimoine (Heritage Days) invite the public to discover places that are hardly known. The subject of this book is a perfect example: it is the «crazy» work done by a resident of the insane asylum of Volterra in Tuscany (the town where the Etruscan works of art mentioned earlier and exhibited at the Pinacothèque of Paris come from). For 15 years, from 1959 to 1973, Fernando Oreste Nannetti covered the façades of the asylum with graffiti. From far they look as incomprehensible as Etruscan writing, but closer up, they reveal their sense, combining diary, telepathic revelations, proper names and even drawings. This astounding work, developed over 70 meters, is in a very poor state today and we can only see it thanks to the photographs taken in 1979 by Pier Nello Manoni. The book includes a CD of a documentary and a 7-meter long photographic reproduction you can unfold in the hallway, to slip into Nannettis world
 Nannetti, Infolio/collection de lart brut Lausanne, 2011, 200 p., 49 .

BOSTON  The Museum of Fine Arts will inaugurate on 17 September 2011 a new wing dedicated to contemporary art, the Linde Family Wing, designed by I.M. Pei.

BRAGA  The 21st edition of the Encontros da Imagem, the festival of documentary photography, will be held from 17 September to 30 October 2011.

BRUSSELS  The Design September festival will be held until 30 September 2011.

DUBLIN  Dublin Contemporary is a new event, open from 6 September to 31 October 2011 that groups together over one hundred international artists and numerous galleries and museums under the name «Terrible Beauty».

EUROPE  The European Heritage Days will be held on 17 and 18 September 2011 and will allow the public to visit numerous sites that are usually closed.

LONDON  Artist Richard Hamilton, the representative of British Pop Art, passed away on 13 September 2011 at the age of 89.

His obituary may be seen on the Guardian website.

PARIS  The 14th International Convention on Turkish art will be held at the Collège de France from 19 to 21 September 2011.

YOKOHAMA  The Triennale of contemporary art, open since 6 August, will be open until 6 November 2011.

THESSALONIKI - Under the call to Old Intersections-Make it New, this Mediterranean platform of contemporary creation will be held from 18 September to 18 December 2011. It brings together more than 70 artists in 14 different locations in the town.