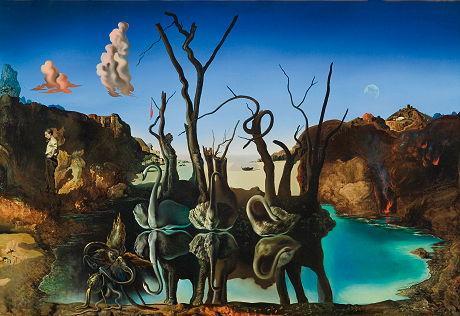 Surrealist Paris brought back to life

BASEL  It is probably the most famous artistic movement of the XXth century. Its creators, who had made Paris their headquarters, became household names, such as Dali, Breton, Magritte The Beyeler Foundation wishes to be daring this new season, and will open it with the great hours of Surrealism. The party-poopers will say they have seen most of them before: la Poupée by Bellmer (Centre Pompidou), Ma gouvernante, my nurse, mein Kindermächen by Meret Oppenheim (Moderna Museet, Stockholm), lEnigme du désir de Dali (Pinakothek der Moderne, in Munich) Actually, what is remarkable in this huge exhibition (290 pieces, of which 110 paintings as well as sculptures, photos, manuscripts and even jewellery) is the proportion of art works that have rarely been shown before. The Antipope by Max Ernst is one of them, which the Peggy Guggenheim Collection from Venice watches over carefully. But the group that is most awaited is surely the Simone Collinet fund, collected by André Bretons first wife, and which includes in particular a large Judith by Picabia. Ubac, Calder, Picasso, Miro, Delvaux complete the show
 Le surréalisme à Paris at the Fondation Beyeler, from 2 October 2011 to 29 January 2012.

The forbidden City takes over the Louvre

PARIS  At the beginning of the XVth century, Emperor Yongle decided to build a new Imperial City in Peking. The model that is set up in the mediaeval dungeons at the Louvre show the ambition of the project that continues to feed the imagination of Westerners. The exhibition at the Louvre, scattered throughout the museum, presents the evolution of this «sacred» venue up to the middle of the XIXth century with more than one hundred objects on loan from the Chinese State museums. We can thus discover porcelain fountains, vases in jade and bronze, enamel plates in compartments, ceremonial dress, paintings on silk commissioned by Emperor Qianlong for his throne room (in particular the portraits of his horses). At the time of the greatly announced globalization, exoticism continues to surround these works of art, even if some of them were made by the Italian Jesuits in the XVIIIth century, the first envoys of cultural diplomacy
 La Cité interdite at the musée du Louvre, from 29 September 2011 to 9 January 2012.

 BRUSSELS  The Bibliothèque royale will present a choice of its Miniatures flamandes (Flemish miniatures) with a selection from the Bibliothèque nationale de France. From 30 September to 30 December 2011.

 MILANO  As if to answer the exhibition at the Fondation Beyeler, the Museo del Novecento will offer some lighting on Dada  Futurismo. Dalle collezioni milanesi. From 29 September 2011 to 15 January 2012.

 PADOVA  At Palazzo Zabarella, Il simbolismo in Italia makes a summary of an artistic movement that included Signorini and Pellizza da Volpedo among its main representatives. From 1 October 2011 to 12 February 2012.

 PARIS  Baselitz, one of the bad boys in German art after World War II, is the object of a retrospective focused on sculpture at the musée dArt moderne de la Ville de Paris. From 30 September 2011 to 29 January 2012.

 PARIS  At the musée du quai Branly, Maori will present a culture that is not limited to the famous haka of the All Blacks team. From 4 October 2011 to 22 January 2012.

FONTAINEBLEAU  Of course all lovers of the Empire will be present. Mr. Osenat, who has become a specialist in this period and who was remarked in particular by the sale of Napoleons sabre at Marengo (in 2007 for nearly 5 M ) is back with an Australian collection, that of Michaël Kroger. The collector, at the head of the Liberal Party, and the former boss of the Australian Broadcasting Corporation, built himself a 5-storey tall town-house totally decorated in Empire style. There is no piece in his collection that gets the least bit near the record of the sabre, but the atmosphere is perfectly rendered, at accessible prices, with furniture from the time (flares, wallpaper spattered with stars, walnut resting beds, gilded pendulums, bow vases), busts as well as grenadier shakos that were really carried out on the battle ground. Among the paintings, we have a version of the famous Napoleon I at Fontainebleau on 31 March 1814, delivered in 7 editions by the workshop of Paul Delaroche, or a Mariage de Napoléon et de Marie-Louise by Laby.
 Vente Kröger on 4 October 2011 at Osenat.

There is an influence by Panamarenko, some Flavin and even Merz But Mircea Cantor (born in 1977 in Rumania) mixes the most diverse influences: from those mentioned we feel we can distinguish the planes, the neon lights and the igloos. But contemporary art is a huge fishpond in perpetual motion, and motifs reappear relentlessly without necessarily having a link. Cantor, in his own personal manner, thinks about globalization, about the loss of any sens, about mans combat against an ever invading technology. The winner of the Ricard prize in 2004 and nominated this year for the Marcel Duchamp prize, Mircea Cantor inaugurates the new exhibition venue of the Credac  the former plant of the illets, a superb industrial architecture form the 1890s where fountain pens and metallic eyelets were manufactured.
 Mircea Cantor, More Cheeks than Slaps at the Credac (25-29 rue Raspail, 94200 Ivry-sur-Seine), until 18 December 2011.

To be seen in the Parisian galleries as well

 The In Camera gallery presents Girls Act, two series dedicated to the Korean youth by photographer Hein-kuhn Oh. From 29 September to 29 October 2011

Half an hour for Baselitz

One could leaf through this book turning it upside down and guess the legends, since Georg Baselitz is indeed for his characters with their heads turned downwards. Thuis could be afun exercise to do with ones children if you wish to initiate them to contemporary art (and if you dont shy away from explaining some rather improper themes such as Grande nuit foutue)(Major ruined night) This book, published at the moment of the exhibition at the musée dArt moderne de la Ville de Paris, is part of a series with constrained but legitimate ambitions. It aims at having unveiling without intimidating the corpus of current creators: short texts, various reproductions, selected quotations, and a synthetic chronology. From Tête de Raisky (oil on canvas from 1960) to Peuple truc  Objet zéro (sculpture from 2009), a vade-mecum in the spirit of our times, for those who are curious but in a rush.
 Georg Baselitz by Bernard Vasseur, Cercle dart publication, 2011, 64 p., 12 

FIRENZE  The 27th Biennale internazionale dellAntiquariato groups together 88 antique dealers at Palazzo Corsini from 1 to 9 October 2011.

ISSY-LES-MOULINEAUX  Le Cube, the centre of contemporary creation, will celebrate its 10th anniversary on 3 and 4 October 2011.

MILANO The Arnaldo Pomodoro foundation has announced it is closing its space on via Solari and cancelled the exhibitions programmed on Giuseppe Penone and Igor Eskinka.

NANTES  La Fabrique, a group of «artistic laboratories», will open to the public on 29 September 2011.

PARIS  The 10th edition of the Nuit blanche (Sleepless Night), that offers a great number of night openings will be held on the evening of 1st October.

ROME (and all of Italy) The event Invito a Palazzo will open to the public on 3 October 2011 the private collections of the banks.

SAINT-JUST-LE-MARTEL  The Centre permanent du dessin de presse et dhumour (Permanent Center of press cartoons and humor) will be inaugurated on 30 September 2011, right before the 30th festival with the same name (from 1 to 9 October 2011).