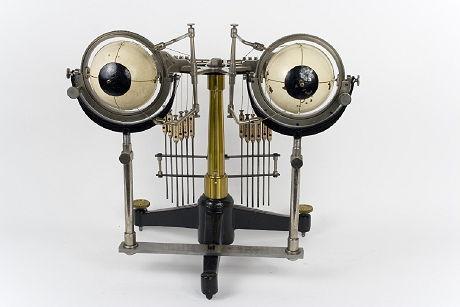 Spirit, are you there?

An original exhibition in Strasbourg explores the fascination the occult and the fascination it had, between 1750 and 1950, over an amazing quantity of artists, musicians and writers. This recourse to what is unexplainable and mysterious is more attractive of course in periods of crisis or decadence, and it has been the source for many major works. As it goes back to the myth of Faust, to Mesmers famous tub or to the Rosicrucian salons, the exhibition gives certain keys to unveil the presence of the current. Our troubled times seem ripe for a return to the irrational and paranormal. Will the current members of sects be capable of drawing such beautiful spectres as Goya and Victor Hugo, of calling upon such powerful esoteric worlds as those of Kupka, Klee and Brauner, or to equal Camille Flammarion or the centennial Chevreul in the game of the turning tables? It is not like us to make pompous predictions, so we ask that the Great Transparent by Jacques Hérold or the Ophtalmotrope with protruding eyes give their opinion!
 LEurope des esprits at the Musée dart moderne et contemporain, from 8 October 2011 to 12 February 2012.

Deineka, the man who came from the cold

MADRID - For those who may have missed him in Rome this spring during the Italy-Russia year, here is a second opportunity to discover Aleksandr Deineka. He did leave some images of Charleston dancers or of women reading, but he is known in particular for his large paintings in which he exalts Soviet heroism, in the civil or military fields. From Workers of the Don to The Defence of Petrograd including The Stakhanovists (shown at the International Expo in Paris in 1937) or his images of aviators and parachutists, he contributed to the creation of the icons of a new nation. The exhibition in Madrid presents 250 works  oil paintings, drawings or photos  and suggests a plunge into the atmosphere with a cycle of Soviet music, from the Revolution to Stalin.
 Aleksandr Deineka at the March foundation, from 7 October 2011 to 15 January 2012.

FLORENCE  In Bella Italia, the Palazzo Pitti brings back to life a moment of Italy before the unification, when Florence was its temporary capital, from 1865 to 1870. From 11 October 2011 to 4 March 2012.

METZ  The Centre Pompidou has organized the first large French retrospective of the brothers Ronan et Erwan Bouroullec, who marked design over the last two decades. From 5 October 2011 to 30 July 2012.

PARIS  At the Grand Palais Laventure des Stein tells the friendship of Gertrude Stein and her brother with Picasso and the painters of the avant-garde and the creation of an extraordinary collection. From 5 October 2011 to 16 January 2012.

PARIS  At the Cité de lArchitecture, Lhôtel particulier, une ambition parisienne shows how this type of residence drew the face of complete neighborhoods in the capital. Du 5 octobre 2011 au 19 février 2012.

PARIS  It is easier than one thinks to buy a print by a «well-known» artist for a little more than a poster from Ikea. This sale of the remaining works from Laboureurs workshop can prove it. A small master from the first half of the XXth century, a contemporary of Toulouse-Lautrec and Marie Laurenin, Jean-Emile Laboureur (1877-1943) sketched various views of the countries he visited, the USA, Greece, but he excelled in particular in the illustration of a great number of works (Gide, Giraudoux or Mauriac) and reviews from his time. Whether it was children, still lives, fishermen, beggars, beach views, these etchings or xylography are estimated at the most at a few hundred Euros. The highest bids will undoubtedly concern an edition of Poil de Carotte from 1894 (5 000 ) with 44 original drawings in the margins (Laboureur was then 17 years old) or a unique copy of the Chansons madécasses by Evariste Parny with some thirty original watercolors (20 000 ).
 Succession Laboureur on 12 October 2011 at Drouot-Richelieu (Ader SVV).

Tate Modern: the Turbine Hall, prior to the intervention of Tacita Dean. Photocredit: Tate Photography.

Tacita Dean: the Tate in 16 mm

She succeeds Ai Weiwei and his millions of ceramic grains, Miroslav Balka and his black box and even Doris Salcedo and her great chasm. Tacita Dean (born in 1965) will be the next artist to occupy the big Turbine hall at the Tate Modern, as part of the Unilever Series, undoubtedly the most prestigious commission offered today to contemporary creators. Tacita Dean has made photography and above all film her main tool, and knows how to use it to exalt the architecture of the premises, as she showed with Craneway, in which she followed the last rehearsals of the Merce Cunningham troop in a former Ford plant, or in Fehrnseturm located in the television tower on Alexanderplatz in Berlin. Should her installation be a success in the imposing volumes of the former electrical plant, as was the case in the past for Olafur Eliasson, she would make a fundamental step into the club of fame.
 Tacita Dean at the Tate Modern, Turbine Hall, from 11 October 2011 to 11 March 2012.

Do not miss while in London...

 Next to Tacita Dean, the Tate Modern dedicates a complete retrospective to Gerhard Richter, who will celebrate his 80th birthday and more than half a century of creation. From 6 October 2011 to 8 January 2012

 Pipilotti Rist assesses her 30-year career, greatly dedicated to video, at the Hayward Gallery. Until 8 January 2012

 Grayson Perry, mad about disguises and the like, presents his ceramics in the midst of anonymous works from the British Museum. From 6 October 2011 to 29 February 2012

The every day life of art stars is no longer a mystery to us, especially if there is something scandalous about them: the lives of Dali, Picasso or Warhol hold few secrets for the public at large. It is a lot more difficult to penetrate the intimacy of artists less covered by the media. While commenting her photo albums, Marie-Victoire Poliakoff has us discover her grandfathers hidden face, the abstract painter President de Gaulle and Malraux worshipped. There was the carefree youth in Moscow (the Poliakoff were horse breeders of Kyrgyzstan origin, related to the great families of Czarism), the passage through Istanbul where Serge Poliakoff played the guitar in cabarets, the arrival in Paris, the marriage to a distant descendant of Henry VIII of England And then of course, the life in his workshop, the friendship with gallery owners (Renato Cardazzo, Denise René, Dina Vierny), the moments of leisure spent at the horse races or having dinner at chez Lipp. It even includes the wild football games in an empty lot: the team of the artists (in shorts and patent leather shoes) against that of the art critics. Definitely a golden age that is for ever gone! And an approach that allows us to see behind one of the great names of the School of Paris something more than a regularly growing rate.
 Serge Poliakoff, mon grand-père by Marie-Victoire Poliakoff, Chêne, 2011, 320 p., 39,90 .

BEAUVAIS - The 8th edition of the photo festival Photaumnales gathers around 20 French and foreign photographers until 6 November 2011.

BRUSSELS  Europalia, the biennial and multidisciplinary event, dedicates its 2011 edition to Brazil, from 4 October 2011 to 15 January 2012.

BRUSSELS  For the 150th anniversary of architect Victor Horta, the Biennale de lArt nouveau will offer from 6 to 30 October 2011 circuits to rediscover this aspect of the national heritage.

MADRID - The Soledad Lorenzo gallery, in celebrating its 25th anniversary in 2011, has announced its closing at the end of the current season.

VERONA - Artverona, a modern and contemporary art fair, gathers more than 100 Italian galleries from 6 to 10 October 2011.

PARIS - Created over a century ago, this international manifestation, fostering dialogue between artists from different horizons, will be held from October 6 to October 10 on the Champs-Elysées.