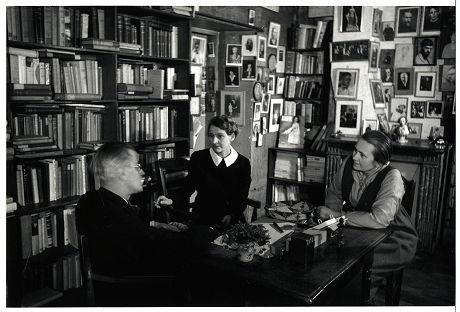 This October in Paris, the most awaited photography retrospectives give the place of honor to women. At the fondation Bergé Yves Saint Laurent, Gisèle Freund, the great portrait artist of the Parisian intelligentsia from the first half of the century (and not only) is the focus: her companions were Gide, Cocteau, Virginia Woolf, Joyce At the Jeu de paume, Diane Arbus, the interpreter of a «different» America, is given recognition in Paris for the first time since the far away 80s (1980 at the Centre Pompidou, 1986 at the American Centre). Another sacred monster, Martine Franck, the guardian of the Cartier-Bresson temple (her husband) demonstrates her eye is still sharp: the MEP shows her latest productions, the continuation of work she began nearly 50 years ago on foreign artists settled in Paris. While the quota for women has great difficulties in being reached in Administration Boards and in Parliament, it is superbly surpassed in photography  Should we imagine we could have in the near future backward quotas to open a space for men photographers?
 Gisèle Freund, lil frontière, Paris 1933-1940 at the fondation Pierre Bergé Yves Saint Laurent from 14 October 2011 to 29 January 2012.
 Diane Arbus at the Jeu de paume from 18 October 2011 to 5 February 2012
 Martine Franck, Venus dailleurs at the Maison européenne de la Photographie, until 8 January 2012.

Alexander, out to conquer Paris

PARIS  He conquered everything and died when he was young, leaving to posterity the image of an invincible, beardless conqueror, a lover of poetry and philosophy. The myth of Alexander the Great is not about to disappear  But do we even know where this great man was from, when did he accomplish such feats and how was his memory kept? The exhibition at the Louvre intends to answer these questions through a large selection of works of art (500 works) on loan from various museums across the world and above all from Greece. They remind us that even though Alexander lived almost twenty five centuries ago, all knowledge about him was «recently» accelerated with the discovery of the tomb of his father Philippe II in Vergina, the capital of ancient Macedonia, in 1977. Next to the bronze helmets, here we have gold bracelets, figurines and calices in earthenware, mosaics and even partitions in papyrus: more than the clang of weapons, this exhibition embraces every day life.
 Au royaume dAlexandre le Grand, la Macédoine antique at the Louvre museum, from 13 October 2011 to 16 January 2012.

 AMSTERDAM-LEYDEN  The national museum of archaeology presents Etruscans: Eminent Women, Powerful Men, which shows the distribution of roles between the sexes among the Etruscans. From 14 October 2011 to 18 March 2012.

 BRUSSELS - Programmed within the Europalia festival, the exhibitions Brazil.Brasil and Art in Brazil 1950-2011 introduce to three centuries of Brazilian art. Until 15 January 2012.

 MADRID  At the Thyssen-Bornemisza museum, Arquitecturas pintadas shows how painters represented architecture throughout the centuries. From 18 October 2011 to 22 January 2012.

 PARIS  At the musée du Luxembourg, Cézanne et Paris will undoubtedly be a great success: how did the painter from the French South see Paris? From 12 October 2011 to 26 February 2012.

 PARIS  The Die Brücke movement led by Franz Marc, seen from all angles is what Expressionismus & Expressionismi offers us at the Pinacothèque. From 13 October 2011 to 11 March 2012.

BRUSSELS  The sector of cartoon strips has made a name for itself these last few years, as one of the most popular in auctions and one of the ones with the highest growth. Next to Artcurial, to Piasa or to Millon, who had it under control, the Pierre Bergé house is making a go at it with a marathon of four auctions in two days. Next to Hergé, to Bilal, to Moebius, new values could appear, in particular Jacques Martin, the father of Alix and the history cartoon strip, who died in 2010 (with a noted lot, 45 of the 62 sheets from his first album, estimated at 200 000 ). Then there will be the consumer products (sculptures in Forton by Jean-Marie Pigeon) and Sketchtravel, a sort of cadavre exquis (Exquisite Corps as Tim Burton calls them) of the drawn report including the contributions from 70 artists (estimate 30 000 ).
 Bandes dessinées at Pierre Bergé & Associé, 17 and 18 October 2011.

He is more discreet than the late Piero Manzoni, with whom he had an unexpected association (their two characters and works seem so different), that would go as far as the opening of a gallery in Milano. Nevertheless, he became, discretely, a solid value of Italian minimalism  and not only. He was born in 1930 at Rovigo, in Venetia but was trained at the Ecole des beaux-arts de la Cambre, in Belgium. For decades, Enrico Castellani has been producing monochrome surfaces (especially white ones) on which are printed light repetitive reliefs, in volume or in hollows. His obsession resembles that of serial production in which Fontana and his torn surfaces, Opalka with his numbers, Gunther Uecker with his nails  in which each work is very close and at the same time very different from the previous one. This group of some forty works of art from different periods is the most important one done in Paris.
 Enrico Castellani at the galerie Tornabuoni (16 avenue Matignon, 75008), from 14 October to 17 December 2011.

Given the infatuation with visual photography, it has been very difficult for documentary photography to make a place for itself, and above all, to be admitted as an artistic discipline (unless your name is Nachtwey or McCullin). The initiative of this editor is the more courageous, as he publishes an opus by a young female photographer with a surrealist name (Dorothy-Shoes) dedicated to a difficult subject  the life of nomads in a country that does not show them any tenderness. A hurried self-taught artist (she began taking photographs in 2005 and was awarded the Talent scholarship in 2010), Dorothy Shoes followed the daily life of Django, «an awful, fat, gypsy» (according to his own terms), who tried to live his life near Loches, while dreaming of the sea. The sepia tainted images show the caravan, the family, the flowers and the countryside, the old Mercedes Benz and the high power wires, and are accompanied by a sensible text.
 Django du voyage par Dorothy-Shoes, éditions du Rouergue, 2011, 136 p., 27 .

BORDEAUX  The Bernard Magrez cultural institute, financed by one of the main actors in the wine world of Bordeaux, opens its doors on 15 October 2011. Its activity will include above all exhibitions of contemporary art at the château Labottière in Bordeaux.

LONDON The modern and contemporary art fair Frieze, with 170 galleries, will be held at Regents Park from 13 to 16 October 2011.

MONTRÉAL - The 2nd Triennale of Québec will be held at the Musée d'art contemporain from 7 October 2011 to 3 January 2012.

PARIS  The Parcours Saint-Germain invites well-known artists to exhibit in the boutiques and cafés of the neighborhood, as well as in the urban space, from 18 to 23 October 2011.

Each Thursday morning, art-of-the-day.info will post an extensive list of openings in galleries and museums in France, Belgium, Switzerland, Monaco and Luxembourg. Karen Knorr Transmigrations, at galerie Filles du Calvaire in Paris, is one of them.