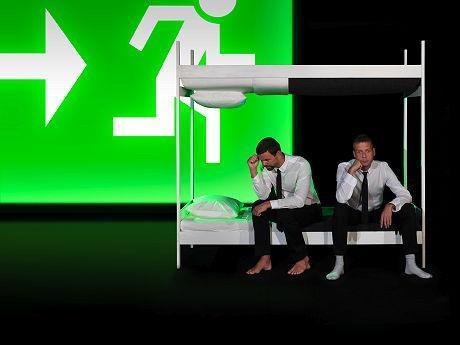 The big return of performance

The XXth century was an upheaval in the visual arts with the «invention» of abstraction, but not only. Performance is one of the other great conquests left to us by the avant-gardes. Whether it is to evoke the genocide by lying naked on a stack of bones (Marina Abramovic), to wear a dress of meat (Jana Sterbak long before Lady Gaga), to paint with blood (Hermann Nitsch), to make a sausage with ones own body (Michel Journiac), to share ones room with a coyote (Joseph Beuys) or to make paintings with a shotgun (Niki de Saint Phalle), these are some of the most unforgettable offers of the kind, but there are thousands of others  The festival Performa, a biannual event organized in New York since 2005, has imposed itself as a reference and has boosted the discipline. It has included hundreds of artists, some of them through the bias of specific commissions (in 2011: Elmgreen and Dragset, Ming Wong, etc.) and reserves a space to the movements that marked their time (this edition will reread the history of Russian constructivism and of Fluxus). At a time when the art market is increasingly globalized, transparent and capitalistic, a performance is practically a subversive act given the difficulty to exchange it, collect it, conserve it
 Performa 11 in New York (several locations) from 1 to 21 November 2011.

BEWARE, LAST DAYS! UNTIL 6 NOVEMBER: Do not miss... Tutenkamon; on the traces of the great pharoh, in the permanent collections of the MUSEE DU CINQUANTENAIRE in BRUSSELS. Read the article in L'Art Aujourd'hui

The mysteries of Raymond Roussel

MADRID  Raymond Roussel is one of those cult authors from the beginning of the XXth century, who took pleasure in games of language and in the deconstruction of traditional writing, and who crowned his eccentric existence with a suicide at the Palm hotel in Palermo, in 1933. Why and how did the author who wrote Impressions of Africa without ever setting foot on the continent (Salvador Dali drew a famous painting from it) influence the artists of the avant-gardes, from Duchamp (who saw in him a guardianship figure) up to Vito Acconci? This is the question put forward by the exhibition Locus Solus, the title of which echoes one of his books.
 Raymond Roussel, Locus Solus at the Reina Sofía museum, from 25 October 2011 to 27 February 2012. The exhibition will be shown at the Serralves Foundation in Porto, from 5 April to 1st September 2012.

PARIS -The painting from the Dutch golden century (XVIIth century) brings together names as famous as Rembrandt, Hals or Metsu. One imagines that most of those masterpieces are strongly attached to the walls of museums. It is therefore a surprise to see that individuals conviction, with money (but not in absurd amounts), can still acquire a quality fund: proof of this is given by the Kremer collection, acquired over a period of less than twenty years, by a former oil broker and his wife. While it hosts a Rembrandt with a remarkable history (bought under a different denomination), as well as works by Honthorst, Hobbema and van Ostade, the pearls are more likely to be found among lesser-known painters, who all excelled to describe material life, the bourgeois interiors and peasant homes, the leisure of villains and of aristocrats - scenes de nicotine addiction, of ice skating, concerts, of greed  Sweerts, Colonia, Jacob van Loo or Judith Leyster, the only woman in this masculine universe, all reach us in their opaque colors: one of the obsessions of the Kremer couple is to erase the varnish that turned yellow over the centuries.
 L'âge d'or hollandais, la collection Kremer at the Pinacothèque, from 27 October 2011 to 25 March 2012.

Rome in the XVIth century

ROME - While the Florentine Renaissance is linked to the Medici family, the Roman Renaissance immediately calls in the popes. Three years after the exhibition dedicated to the XVth century, this one shows the increasing domination of the popes during the period that followed, that of the Sack of the city (1529) but also of Raphael and Michel-Angelo (who died in 1564). The two semi-gods are the pillars of this new retrospective, which groups together works come al over the world (from a Perin del Vega from Melbourne to a Sebastiano del Piombo from the Hermitage), in particular a Pietà from Buffalo, which some attribute to Michel-Angelo, that has been restored for this show. Another major work in the exhibition will be the 3D renderings of the Loggia of Cupid and Psyche at the Farnesina.
 Il Rinascimento a Roma at the Fondazione Roma Museo (Palazzo Sciarra) from 25 October 2011 to 12 February 2012

 MADRID  At the Museo ABC del Dibujo, La elegancia del corazón (Elegance of the heart) shows Paris as seen by a great illustrator from the 1930s, Carlos Sáenz de Tejada. From 25 October 2011 to 26 February 2012.

 ROME  A great architect, he also excelled in other fields: at the Casino dei Principi, Gio Ponti, il fascino della ceramica shows one of the facets of the creator of the Domus magazine. Until 8 January 2012.

 TONGRES (Belgium)  In Sagalassos, City of Dreams, the gallo-roman museum brings back to life an ancient city in Turkey, in a décor designed by opera director Guy Joosten. From 29 October 2011 to 17 June 2012.

The exhibition gathers those Swiss artists who create outside the traditional field of ceramics.

All the openings of the week

When museums clear out the shelves

NEW YORK  The sale of Russian art at Sotheby's on 1st November is interesting for the handful of masterpieces it will offer, by Répine, Kustodiev, Gontcharova or Lentulov. But it is even more so by the serious question it brings up once again: do museums have the right to sell their patrimony? In most European countries, the impossibility of selling public collections is a given principle. In the Unted States, where great museums depend more on private foundations and function according to a capital allocation, there is a lesser taboo. Here we have a new example: while we can understand that the National Western Museum may separate itself from a superb Bride by Nikolai Fekine, very far from its core target, one is surprised by the other "de-accessionning". It is the respected Museum of Fine Arts in Boston that is getting rid of a remarkable Verechtchaguine, The Pearl mosque at Delhi. The 3 millions dollars expected will help finance the purchase of

Brasil of the fifties

His name is not well known but it represents, as much as that of media famous Pierre Verger, a Brazil long gone by: the Brazil of right after the war, that of Getulio Vargas, of the Maracanazo (the terrible loss in the World Final Soccer Cup in 1950), of the beginning of the Carnival fashion at a world scale. José Medeiros (1921-1990) created his most beautiful subjects very early in life, for the magazine, O Cruzeiro, financed by press mogul Assis Chateaubriand, who gave himself the means to produce ambitious reports, similar to those of Vu or Life. Here we have some pioneer series on the Amazon Indians and of Mato Grosso (as of 1949), on the rites of candomblé, on the small tribe of the Nordeste or simply on the beach life at Rio de Janeiro and the society life at the Jockey Club. At the age of 40, Medeiros abandoned press photography and turned towards the cinema, where he was the assistant to great directors such as Carlos Diegues. His decisive moment had passed, he is back today thanks to a lucky rediscovery
 José Medeiros. Chroniques brésiliennes, directed by Sergio Burgi and Elise Jasmin, Hazan publishing house, 2011, 249 p., 35 .

Also to be seen: the José Medeiros exhibition at the Maison de l'Amérique latine, until 3 December 2011.

ABU DHABI  The TDIC (Tourism Development and Investment Co) has pushed forward its decision to allocate to the public market the Guggenheim Museum designed by Frank Gehry, thus casting a doubt on its opening, foreseen for 2013.

BAMAKO  The 9th edition of the Rencontres de Bamako, the African photography Biennale, will be held from 1st November 2011 to 1st January 2012.

BUENOS AIRES  The Buenos Aires Photo fair will be held from 27 to 30 October 2011 at the Palais de Glace.

TEL AVIV - The Tel Aviv Museum of Art will inaugurate on 2 November 2011 a new building (the Herta and Paul Amir Building) designed by the Prescot Scott Cohen agency. The first exhibition will be dedicated to Anselm Kiefer.

PÉRONNE - The first retrospective of Pierre Buraglios works dealing with the theme of war, along with the new works created during his residence at the museum in 2011, is presented in conjuntion with the Historials graphic arts collection.