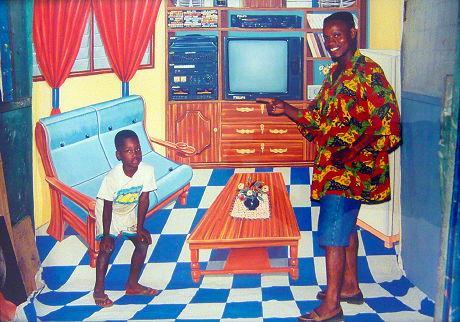 Special: Paris in the grips of photography

In November 1980, an audacious biannual operation was launched in Paris: the Mois de la photo. Three decades later, the transplant has been a success: Paris will be a real goldmine of events in November. The salon Paris Photo is the leading manifestation, with more than one hundred of the best art dealers in the world. This year, it will be held for the first time at the Grand Palais and will look into African photography. There wil also be themed exhibitions (on the recent purchases for example by three major institutions among them the musée de lElysée in Lausanne) or a part of the collection of the JP Morgan Chase, begun by David Rockefeller in 1959. In this even year -consequently without a Mois de la Photo -, many other events have grafted on to the surrounding fever: exhibitions by the dozens, various auctions and the unavoidable fairs on the sidelines that have scattered all over the capital's territory, from Fotofever to Photo Off.

Photo Saint-Germain-des-Prés, from 4 to 30 November in the galleries in the neighborhood

PARIS - A real trouble maker in fashion and graphic arts, Jean-Paul Goude launched singer Grace Jones and staged the bicentennial of the French Revolution. In 40 years of professional life he has combined all genres -photography, video, drawing, music- in order to create his own style, a "French touch", largely known abroad, that spans from the remix of the famous magazine Esquire to Chanel ads with Vanessa Paradis. The retrospective offers a focus on the strong points of his career: the engine that opened the parade in 1989 and six installations that rhythme the key moments, among them the cut-out ektas and the neon furniture.
 Goudemalion, sa vie son uvre at the Arts décoratifs, from 11 November 2011 to 18 March 2012.

 BORDEAUX - With Sociétés secrètes, the CAPC shows how the organization of clandestine or secret organizations have impacted modern civilization. From 9 November 2011 to 26 February 2012.

 PARIS  In Sept fois plus à louest, Yann Kersalé offers at the Espace Fondation EDF a new way of looking at Brittany, through visual and light filled installations.

 VICENZA  At Palazzo Montanari, Avanguardia russa presents rarely known works of the Russian avant-gardes, given by a group of museums from the Russian province and including a few photographic compositions by Rodchenko. From 11 November 2011 to 25 February 2012.

The strength of the Classics

PARIS  Christie's adapts to the fashion of the times and in an impressive manner has organized three major photography auctions in two days, with two major figures. The first auction is dedicated to Henri Cartier-Bresson, and should allow the Foundation of the same name to have new means: the lot for sale is Derrière la gare Saint-Lazare, from 1932, estimated at 120 000 . On the next day, Irving Penn, who died in 2009, could surpass him with his snapshots from 1951 of the number one model Lisa Fonssagrives (his own wife) expected to go for more than 200 000 . As for Sothebys, it will present nearly 150 lots, led by a Olympia by Leni Riefesnthal, taken in 1936 during the ill-fated Olympic Games in Berlin (100 000 ), followed by a Vue de la Seine, a very early daguerreotype by Vincent Chevalier, who died in 1841, two years after the invention of photography. Kapandji Morhange, in partnership with Ader, will present other more affordable classics, starting at 1000 : Atget et Gloeden in prints from their time, travel photographs by Samuel Bourne and a beautiful series of South-American pioneers from the XIXth century (Marc Ferrez in Brazil, Panunzi in Argentina, Bruehl in Mexico).

Photographies at Sotheby's on 11 November 2011.

Vitkine, the outline of the world

The artist will be present at the exhibition opening on 10 November, we have been promised. Nothing very strange in that fact, if it were not that the artist in question is celebrating his 101 birthday The rediscovery of Alexandre Vitkine is full of coincidences: born in 1910 in Berlin but of Russian origin, this cosmopolitan and enigmatic character worked in industry (as engineer electricity-magnetizer) more than in photography, which he only practiced as an amateur. While looking through the archives of Gaz de France gallery owner Laurent Herschtritt found his traces again starting with a bunch of snapshots left to the institution. Done according to the technique of backlit shots, he turned subjects that were generally thought of as being shied away from (electric transformers, gazoducts or high tension pillars) as well as palm trees or cactus plants, and some surprising abstract compositions, in deep blacks, that make us think of Soulages, Motherwell or Brice Marden
 Alexandre Vitkine, inédits 1967-73 at La Galerie (26 rue Bonaparte, 75006), from 8 to 30 November 2011.

Do not miss, in the same spirit, the Tracés électriques by Claude Gassian at the Serge Aboukrat gallery.

We are not always aware of the speed at which inventions spread. This book gives us a good example: photography had barely being revealed to the French public at the conference of Arago in August 1839 and it was already known all over the planet. As of February 1840, Horace Vernet and Goupil-Fesquet were in Istanbul with their black box. The passion the residents of that city had for that new process would no longer dwindle and the well-known workshops  Sebah, Abdullah  would compete with the specialists who came from abroad (Girault de Prangey, Naya, Claude-Marie Ferrier, Gervais-Courtellemont) to shoot the portrait of the Turkish capital. They shot the soveieigns (Abdülmecid stepped up to the throne in that fatal year 1839), architecture and panoramas (the Galata tower and the Bosphore soon imposed themselves as icons), the population (armed Circassians, Dervish, beggars and the countless dogs in the city), the trades (firemen, tobacco companies, rug factories),up to political events (the conference of the Golden Horn in 1876-77). These images, all from the same collection, describe a golden age that would be swept away by the upheavals of the beginning of the XXth century.
 Istanbul, photographes et sultans, 1840-1900, by Catherine Pinguet (collection Pierre de Gigord), CNRS éditions, 2011, 244 p., 39 .

BENTONVILLE (Arkansas)  The Crystal Rocks Museum of American Art, financed by the heiress of the Walton dynasty (the Walmart stores) will open on 11 November 2011.

NEW YORK  The new Contemporary Galleries of the Museum of Modern Art (MoMA), dedicated to the art from the 1980s to our day, will open on 17 November 2011.

NEW YORK  The Pavilion of Art and Design, an American version of the Pavillon des arts et du design, will be held from 11 to 14 November 2011.

PARIS  A painting by Nicolas Tournier, le Portement de croix, stolen in 1818 at the musée des Augustins in Toulouse and which reappeared on the stand of the Weiss gallery during the Paris Tableau art fair, has been given an export bar by the French Culture minister.

Specialized in ancient Rome, the gallery shows how photography can enhance centuries-old sculptures.