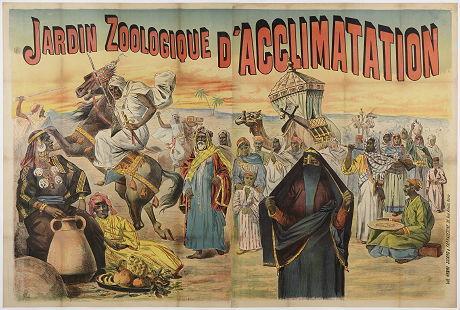 Of zoos and men

PARIS  Exhibit men? The idea today seems ludicrous but it had its moment of glory. At the crossroads of ethnology, racism and colonialism, «human zoos» flourished at the turn of the XXth century. This exhibition shows how these exhibits of a new genre were justified and how they helped nourish racial prejudices that last. Under the leadership of former football player Lilian Thuram and with loans from some 200 institutions, we are plunged into the daily life of fairs, cabarets, reconstructed villages (in France, for example, the Nubians shown at the Jardin dacclimatation as of 1877, or the Sudanese or «indigenous» villages of the colonial exhibition in 1931 in Vincennes), where the exotic beings were shown like circus animals. Slide shows, models, photographs and posters give us a full idea of a fashion that seemingly attracted one billion visitors between 1890 and 1958, the date a last village from Congo appeared at the Expo in Brussels
 Exhibitions, linvention du sauvage du 29 novembre 2011 au 3 juin 2012. Catalogue musée du quai Branly, Actes Sud, 49 .

VERONA  We all know the Venitian XVIIIth century well, with its Guardi and Canaletto. But what about its counterpart Verona, just a few hundred kilometres away? Of course authors who were active in Venice also left their mark in Verona such as Tiepolo or Bernardo Bellotto. Of course they are represented in the exhibition that nevertheless wishes to bring forward those artists who have been half-forgotten. It is the case of Giambettino Cignaroli who was at the origin of a local academy, and more so, Pietro Antonio Rotari, who was sought by the Tsars in Saint-Petersburg as much as Vernet or Elisabeth Vigée-Lebrun. In an era in which virtual reconstitutions are common practice, the one that stages the return of the Triumph of Hercules is much awaited: this fresco by Giambattista Tiepolo, that decorated the Palazzo Canossa, returned to dust during the bombing of the Ponte Scaligero bridge, in the night of 24 April 1945
 Il Settecento a Verona at the Palazzo della Gran Guardia, from 26 November 2011 to 9 April 2012.

 ASSEN (Netherlands)  At the Drents museum that has just reopened on 17 November 2011 following two years of restoration, the opening exhibition is dedicated to the China of the Tang. Until 15 April 2012

 LE MANS - At musée de Tessé, Du Nil à Alexandrie illustrates with numerous archeological artefacts the links between Alexandria and the Nile. From 26 November 2011 to 27 May 2012.

 PARIS  His reputation as a hunter was immortalized in the sumptuous manuscript Le Livre de la chasse (The Hunting Book) which he commissioned in 1387. But who was Gaston Fébus, the Count of Foix? That is what the musée du Moyen Age asks by presenting a selection of enluminures. From 28 November 2011 to 5 March 2012.

PARIS  In ancient drawing, the interest of wealthy specialists can live side by side with that of amateurs neophytes, as can be seen in the span of prices represented here: 100 000  expected for a Meal at Simons by Giovanni Domenico Tiepolo, 150  for a Study of a cart by Georges Michel (1763-1843), more appreciated for his views of Montmartre. Among the 199 lots of this first sale dedicated to a private collection (from «Monsieur S.»), we can have fun following the destiny of artist from the XVIIth century known both in Verona (see above) such as Marco Marcola (a Venus appearing to Mars estimated at 800 ) or Louis Dorigny (three drawings of persons surrounded by angels, 2000 ).
 Dessins anciens 30 November 2011 at Richelieu-Drouot (SVV Million & Associés)

The framework of a gallery, even if it is one of the largest in Paris, must seem rather small to him. That is because JR has gotten into the habit of developing his worksphotographs of faces taken with a very wide angle  in gigantic formats in the heart of cities: on the Pont-Neuf, on the roofs and staircases of the favelas in Rio, on the wall that separates Israel and the occupied territories. The young artist (28 years old), is in a rush and he has skipped over some phases. He has already made a movie much appreciated in Cannes (Women are heroes), that was awarded the Ted prize in the USA, that is 100 000 $ to develop his new projects. Among those we have Unframed that pushes him to exhibit reproductions (huge ones, of course) of famous photographs in an urban space, by taking them out of their context.
 JR, Encrages at the galerie Perrotin (76 rue de Turenne, 75003 Paris), from 19 November 2011 to 7 January 2012.

Around sixty Montages, a nostalgic tribute to the clippings album created by his father in Barcelona during the Spanish Civil War.

How can we approach contemporary art? Through painting? Through sculpture? Through performances? Through video? In face of a field of art that has spread out of dimension, the best initiation could probably be to nibble here and there, without a preconceived plan: that is exactly what this book suggests. It groups together chronicles written in la Tribune des arts and concern exhibitions at the Mamco (Musée dart moderne et contemporain de Genève- the Museum of Modern and Contemporary Art in Geneva). Through short texts full of information, we stroll from Nam June Paik to Claudio Parmiggiani and end with the most hip creators, such as Philippe Ramette or Fabrice Gygi.
Les objets de lart contemporain, par Karine Tissot (bilingue français/anglais), lApage-éditions Notari, 2011, 240 p., 30 .

AVIGNON  Galerist Yvon Lambert has announced on 18 November 2011 that he would bequeath his collection (over 450 major contemporary works) to the French State. The collection will remain at Hôtel Caumont.

DENVER  The Clyfford Still Museum opened on 19 November 2011 in a building designed by Allied Works Architecture.

ISTANBUL-The 6th edition of the Contemporary Istanbul fair will be held from 24 to 27 November 2011.

LJUBLJANA-The Metelkova museum of contemporary art will open on 26 November 2011.

MEAUX-The museum of the Great War (Musée de la Grande Guerre), that includes a collection of 50 000 objects from WW I, opened on 11 November 2011.

PHOM PENH- The 4th edition of the Photo Phnom Penh festival will be held from 26 November to 3 December 2011.

PARIS - Explain a social event by comparing the views of artists, historians and ethnologists: that's the task L'Adresse Musée de la Poste has undertaken with devils and demons.