This is our last issue for 2011. Our next newsletter will appear on January 5 2012. MERRY CHRISTMAS AND HAPPY NEW YEAR! 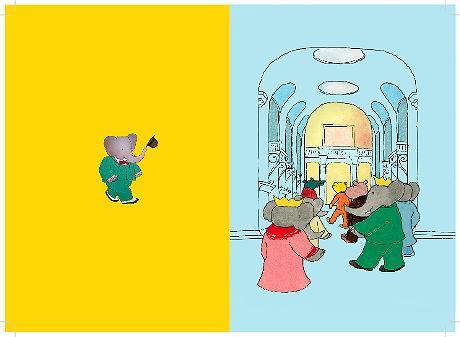 Our favorite elephant out in a cruel world

In these times of frenetic zapping, it is good to know that certain values resist these passing fashions. Take Babar for example: the courageous royal elephant is in better shape than ever, three quarters of a century after his creation. As Laurent de Brunhoff, the son and worthy successor of his creator Jean de Brunhoff readies himself to celebrate his 86th birthday, Babar has just been enthroned at the Arts décoratifs and the Bibliothèque nationale de France, with two grand retrospectives. The elegant, well-dressed and right-minded pachyderm, with a life well-organized in his slow and well-thought out manner, had all the assets to be considered old fashioned. On the contrary, he has become an icon, a planetary star, at a time when impatience, frenzy and greed are the key words. We have nothing against seeing Babar as an idol, he is liked by all. But his consecration has something of a desperate search for points of reference in face of increasingly technical and alienating toys that become obsolete almost immediately Merry Christmas!

BEWARE, LAST DAYS! UNTIL 18 DECEMBER... Do not miss... THE 3RD BIENNALE OF CONTEMPORARY ARTI OF THESSALONICA at Stavroupoli, in Greece. Read the article in Art Aujourd'hui.

EVIAN  Obviously, what history has recorded about Charlie Chaplin are his movies. But what few people know is the extraordinary patrimony he left of fixed images. The exhibition at the Jeu de paume, a few years ago, reminded us of the exceptional quality of his black and white stills with unequalled style. The donation of his 10 000 images to the musée de lElysée, in Lausanne, in January 2011, motivated this «sample» exhibition: we can see key episodes of his masterpieces, as well as the portraits shot by Edward Steichen, intimate family moments as well as the famous Keystone album, a very precious resume of his first 35 movies, more efficient than any hagiography
 Charlie Chaplin, images dun mythe at the Palais-Lumière, from 16 December 2011 to 20 May 2012.

 ROME  Guercino, the herald of baroque painting, is hosted at Palazzo Barberini as it pointedly inaugurates new exhibition rooms. From 15 December 2011 to 29 April 2012.

VIPS have a greater sense of humour than one imagines. As proof, prince Philip of Edimburg did not take offense at being photographed as he eyed a pornographic photograph, nor did Prince William while he tried on the crown in his most natural attire, nor did Obama in his cloud of Marlboro while he has said he has officially stopped smoking. Grant you, it is not really them: photographer Alison Jackson uses look-alikes or doubles to prepare her truer than life images that underline to what point the media have formatted our vision of celebrities. From Brad Pitt to Kate Moss, from Paris Hilton to the Queen of England washing dishes with her rubber gloves, this is a complete parade of the stars, in risqué positions that make us wonder if it is really they, is it really conceivable?
 Alison Jackson is shown at the fondation Francès (Senlis) until 28 January 2012.

PARIS  Italians take advantage of the end of the year to give daring gifts, such as red lingerie. A house that is properly named Eve has chosen this period of the year to offer a very special sale: simply 915 lots, scattered over two days and detailed in a catalogue that is «forbidden to minors». This ensemble of erotica covers all periods, from the figurative Chimú vases from Peru to the wrought iron phalluses from Benin, including the XIXth century, ivory tobacco boxes with sliding tops to peek into highly risqué scenes. As we can see with this collection, all periods of history have had their share of extraordinary inventiveness, which is not limited to the gallant XVIIIth century nor to the Belle Epoque, though they too are well represented by bowls for sugared almonds with a double bottom, corkscrews with feminine legs and other stereoscopic views
 Erotica 18 and 19 December 2011 at Richelieu-Drouot (Eve SVV)

The spirit of cabins

In his Diario de la guerra del cerdo (Diary of the pigs war) Bioy Casares had the young porteños from Buenos Aires kill people over the age of 50 to solve the problem of seniors. We may not be at that level yet, but the life of older people in our society today is surely nothing to be proud of: they are often alone and hardly have a role anymore of transmission to the younger generations. Taking this sinister fact as a point of departure, Nicolas Henry did a world tour in the footsteps of old people, in search of their knowledge and their philosophy. Rather than hand them a microphone to record them, he asked them to build the cabin of their dreams, the one that symbolises their aspirations and their vision of life, which he then photographed like a theatre stage. From Australia to Ecuador, from Jordan to Bandol, from Tokyo to the dessert of Atacama: this gives birth to crazy and poetical creations, based on scraps and pieces  materials, old gloves, branches, iron and dry flowers -, that accompany a humanist position on Nature, on time, on love. Long live a world of the old!
 Les cabanes de nos grands-parents, by Nicolas Henry, Actes Sud, 2011, 192 p., 42 .

WORLD  The 11 Gagosian galleries throughout the world will present from12 January to 18 February 2012 a unique exhibition of Damien Hirsts spot paintings.

NEW YORK - The 50-carat Peregrina pearl that belonged to Elizabeth Taylor was sold for $11.8 million at Christies on 14 December 2011, setting a new world record.

ROME  The Galleria nazionale darte moderna, in celebrating its 100 anniversary, will reopen to the public on 21 December 2011.

The fascinating work of an art brut giant, who worked as a sweeper at Bois de Boulogne and died in 1976