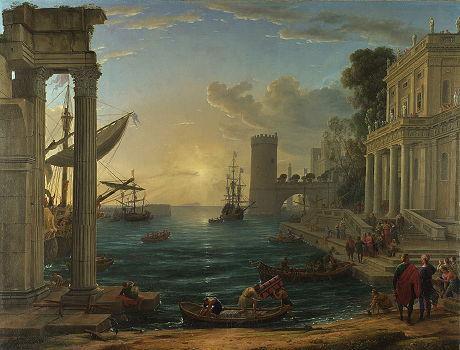 Last week we presented to you a fine selection of exhibitions in Europe in the fields of contemporary art and photography. As can be seen in this issue, the offer in Modern and Ancient art, as well as the history and civilization retrospectives, is quite rich as well. There is a lot of talk of crisis but museums outdo themselves to show they are not giving in

13 MAJOR VOYAGES, FROM THE PHARAOH TO PATAGONIA

la France en relief is the exhibition the Grand Palais will present as of next week (18 January) by presenting a part of the extraordinary collection of Louis XIVs models. By choosing the road of eclecticism, the Paris institution then pays a tribute to Beauté animale, which runs a census of the presence of two and four legged animals in art (21 March). The exhibition had been cancelled last year in the midst of a diplomatic storm between France and Mexico but the Masques de jade mayas will finally arrive at the Pinacothèque of Paris (26 January). On that same day, with Hajj, the British Museum will focus on a pilgrimage that mobilises millions of persons each year towards Mecca. Antiquity will be a sure value in 2012 with Gods and currencies at the National Museum of Catalonia (18 February), then with the booming arrival at the Louvre of the treasures of Fouilles du Rhône, found in Arles over various years of search under the water (9 March). Egypt is obviously on the calendar: in le Crépuscule des pharaons, the musée Jacquemart-André delves into the last century of the great Egyptian civilization, up to the fall of Cleopatra (23 March). The Fitzwilliam Museum in Cambridge announces a gathering unheard of to date of Funerary treasures of the Han dynasty, on a date to be confirmed, while the Dahlem museum in Berlin draws a parallel between China and Prussia, in the field of porcelain and tea (8 June), certain offers take us much further in space and in the myth as those of the quai Branly museum which tries to give a certain unity to the horizontal vertigo caused by Patagonie and to decypher the mysteries of chamanisme in les Maîtres du désordre (both on 6 March). But the unknown is sometimes right next door: in Mapping Cyprus, Bozar in Brussels sheds some light on Cyprus, a country we hardly know other wise than through its geopolitical upheavals (22 June) while the Victoria & Albert Museum in London, with Robes de bal, unveils a well-guarded secret, «British» glamour since 1950 (19 February)

12 MAJOR MOMENTS, FROM ARTEMISIA TO TURNER

Italian art has the choice part among the ancient masters. The great Tintoretto is being shown at the Quirinale, the residence of the President of the Italian Republic (25 February). On the following month, it will be Artemisia Gentileschi, the symbol of feminism in painting as much as Frida Kahlo, who will be taking residence at the Maillol, in Paris (21 March). Another woman will have hearts beating at the Louvre, Saint Ann by Leonardo da Vinci around whom a complete exhibition is being mounted (29 March). Again in Paris, but this time at the musée du Luxembourg, another great Venitian master, though less known but whose influence was decisive, is announced: Cima da Conegliano (5 April). The Prado museum will aim very high with a retrospective of Raffaello focused on his later production (12 June, then at the Louvre). We can still add to this rich list Turner and Le Lorrain at the National Gallery in London, that examines the influence of the former who spent a great part of his career in Rome - on the latter (14 March). The Boijmans van Beuningen museum in Rotterdam sums up this fascination for Rome during the Renaissance by analyzing the case of Maarten Van Heemskerck (11 February). Spain ads points to the winning total of Southern Europe with an original state of affairs on Catalonia in 1400 at the MNAC of Barcelona (30 March) and an exhibition on the last years of Murillo at the Prado (26 June). To save the honor of the Northern countries there is only Nicolas de Leyde, at the musée de luvre in Strasbourg (30 March), the Miniatures flamandes at the Bibliothèque nationale de France (6 March) and a masterpiece, unique in its kind, the Belles Heures du duc de Berry, at the Louvre (4 April).

19 WINTER TRAILS, FROM TAGORE TO DALI

He is known more as a writer, and as the Nobel Prize for literature, but Rabindranath Tagore produced at the end of his life humanist paintings that turn him into a painter of value (at the Petit Palais, 27 January). On the following day, a retrospective in Namur, in Belgium, is dedicated to Degouve de Nuncques , who became famous by creating night effects in Bruges-la-morte (at the musée Félicien Rops, 28 January). A sign of the times, or a wish to transfigure a sad present? Symbolism seems to be gaining momentum. Unjustly unknown abroad, Adolfo Wildt is one of the great demonstrators of the Italian version, in particular in his statues with exaggerated traits. The retrospective organized at San Domenico, in Forli, is expected to be historical (28 January). A cousin, by affinity, of Fantin-Latour or Khnopff, Danish artist Hammershoi (1864-1916) had a production that was very original, enigmatic and in particular marked by various portraits from the back (SMK Copenhagen, 4 February) 2012. Another great master of Northern painting, Finnish artist Gallen Kallela (musée dOrsay, on 8 February) became very famous with his illustration of the national epic, the Kalevala, at the 1900 Universal Exposition in Paris. And for those who missed Odilon Redon at the Grand Palais, they have a second chance to see one of the giants of European Symbolism, at the Mapfre foundation in Madrid (9 February 2012). As for the Van Gogh museum, it is doing a transversal analysis of Symbolism in the landscape (24 February). Three superstars should brighten up our winter: the colorist and founder of the Nabis, Pierre Bonnard (1867-1947), referred to through some sixty paintings at the fondation Beyeler in Basel (29 January); Chagall, whose long career is described at the Thyssen-Bornemisza museum in Madrid, in particular the Russian and French years, while Caja Madrid focuses on the American years (14 February); and Degas, will be entitled to the large retrospective everyone has been awaiting since 1988. The one presented at the musée dOrsay (13 March) is dedicated to the nude. Picasso, the artist most in demand in the world, is expected this year in London. At the Tate Britain, Picasso and Modern British Art shows his influence on the English art scene (15 February). Aside from the master of Malaga, Spanish painting is well defended by others: the friendship between Dalí and his secretary Sabater is documented at the Espace Dalí, in Paris (10 February) while Sorolla, one of the rediscoveries of these last years, will land at the Palazzo dei Diamanti in Ferrara (17 March). The same month of March will be like a small display of fireworks with Americani a Firenze at the Palazzo Strozzi (3 March), Matisse repetita, at the Centre Pompidou (7 March) showing Matisses love for duplicating motives, and Berthe Morisot, will slip out of her success in Spain at the Thyssen museum to land at the musée Marmottan (7 March). Considered a «modern baroque», a virtuoso of monumental decorations, José Maria Sert will be celebrated at the Petit Palais (8 March). The 150th anniversary of his birth will be celebrated in grand style at the Kunsthistorisches Museum (14 February): a special bridge will allow the public to admire the frescoes by Klimt, painted by the master 12 meters above the entrance. As for the Albertina, it will present Drawings by Klimt (14 March).

6 SPRING ESCAPADES, FROM RENOIR TO HOPPER

Impressionism hits it right on the target every season: following Degas, it will Renoir who will carry the colors of the movement: the Kunstmuseum in Basel will present the most recent retrospective on his young years (1st April) Another movement that is very much awaited is Expressionism, entrusted here to Kirchner, at the Mapfre foundation (22 May) and to the movement "target="_blank"> The Age of Lights Die Brücke, shown at the musée de Grenoble (31 March). A terrible year during World War I, 1917 will be the object of a themed exhibition at the Centre Pompidou Metz (26 May) with Duchamp, Brancusi and Picasso at the top of the billboard. At the same time, the Barbican in London will scan a movement that is practically a cult, the Bauhaus, drown in the horrors of the rise of Nazism (3 May). The publics pet, American artist Edward Hopper should attract the crowds during his stay at the Thyssen-Bornemisza museum (12 June) before stopping by Paris at the Grand Palais (5 October).

Francesca Piqueras, the architecture of silence

After working on the cargo dismantling workshops on the shores of Bangladesh, the photographer explores another world of metal: the Mauritanian coast, on which the supertankers are marooned at the end of their life.

NEW YORK  The new American Wing of the Metropolitan Museum of Art opens on 16 January 2012.

SINGAPORE  The Art Stage contemporary fair is being held from 12 to 15 January 2012.