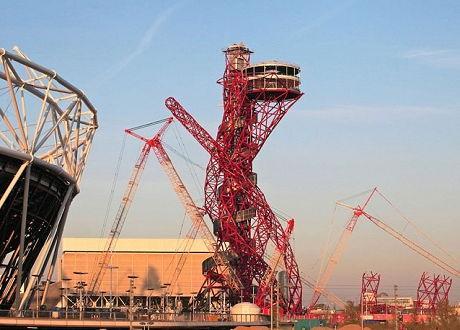 This debate always has an after taste of chauvinism: London and Paris continue to quarrel over the title of European capital of creation, next to the usual outsiders: Berlin, Madrid, Barcelona, Milano As the Olympic Games of the Summer of 2012 get closer, the rhythm becomes more intense across the channel with the announcement of such driving forces as Lucian Freud (in February at the National Portrait Gallery), Damien Hirst (at the Tate, in April) or the Bauhaus (in May, at the renovated Barbican). They have even foreseen, as in 1948, specific cultural events for the Olympics including for example «Art in the Park» (a series of installations in the Olympic village that will become the largest European park after the Games), and which will culminate with «London 2012 Festival», from 21 June to 9 September, which has programmed 1000 representations and events. In the meantime, visitors will keep busy with the ArcelorMittal Orbit, a metal sculpture 114.5 metres tall, designed by Anish Kapoor.

Nature according to Hockney

LONDON  In his time he was as precocious and prodigal as Damien Hirst, whom we cannot avoid today. Indeed, David Hockney was still a student when in the beginning of the sixties he was a star of the exhibition «Young Contemporaries», one of the key moments of the birth of British Pop Art. Now in his seventies, Hockney (born in 1935) has abandoned California and returned to Yorkshire, the region of his childhood. For some years now he has been working intensely on landscapes, in particular those that had marked him nearly half a century ago. The interest of the exhibition at the Royal Academy lies precisely in showing the evolution of a genre and a style over the (long) term of a human life, with paintings from then (Rocky Mountains and Tired Indians from 1965) and recent creations. It is particularly interesting since Hockney likes to reach out to the techniques of the great classic masters he admires, and also embraces with passion the most modern technologies, such as is proven by his drawings on an iPhone and an iPad
 David Hockney, a bigger picture at the Royal Academy of Arts, 21 January to 9 April 2012.

Soon to be shown in London, and in England...

 At the Tate St Ives, young Anglo-Japanese artist Simon Fujiwara pays tribute to the region of Cornwall of his childhood. 18 January to 7 May

 The Victoria & Albert Museum presents in Golden Spider Silk the largest webs spun with spider thread, among them a shawl made by one million spiders from Madagascar... 25 January to 5 June.

 The British Museum looks very closely at a key moment in the Muslim world: the Hajj or annual pilgrimage to Mecca. 26 January to 15 April.

 Turner and the Elements at Margate Contemporary shows the fascination Turner had for rain, wind and the forces of Nature. 28 January to 13 May.

 Migrations, at the Tate Britain, explores a very fashionable theme: migrations, seen through the prism of art over the last five centuries of British history. 31 January to 12 August

 Decolonizing Architecture, at Nottingham Contemporary, describes an architecture of oppression in the occupied Palestine territories and its possible reconversion. 28 January to 15 April.

NEW YORK  The scattering of the Betty Ring collection has sent a shock wave among aficionados. This name may not mean much in Europe but it is very important among collectors of Americana. Over half a century, Mrs. Ring assembled testimonials of popular art (or folk art), in particular childrens embroideries on which she wrote a bill at Alfred A. Khnopf in 1993. Nearly two hundred lots are up for sale at Sothebys: these naive paintings, inspired by the enlightening episodes of religious history or aligning pastoral scenes, alphabets and fruit baskets on linen cloth, made by young girls hardly 10 or 15 years old. Today they reach important prices: some for example, dated from the end of the XVIIIth century, therefore contemporary of the American independence, could climb up to 100 000 dollars during the sale.
 Important American Schoolgirl Embroideries: The Landmark Collection of Betty Ring at Sothebys on 22 January 2012.

Gary Hume, the other YBA

LONDON  From the very beginning he was one of the leading figures of the Young British Artists (YBA), a movement Damien Hirst, who takes almost all the credit for it today, also belonged to. Even though he is very expensive, Gary Hume (born in 1962) does not enjoy the imposing force of Gagosian that presents Damien Hirst in all of its galleries throughout the world. To stand up to that force though, the great operator of the English scene, Jay Jopling, is dedicating an exhibition to him in two of his White Cube spaces to show his creations in vivid and fresh colors, similar to collages or stencils, with clear lines, close to those of Alex Katz and Julian Opie.
 Gary Hume, The Indifferent Owl, at the White Cube gallery (Hoxton Square and Mason's Yard spaces), 18 January to 25 February 2012.

Also worth looking at, in the galleries in London...

 Damien Hirst has taken over all the Gagosian galleries (including the two in London). Until 18 February.

 At the Lisson Gallery, Santiago Sierra, who puts capitalist society and alienation through work up for trial, presents Dedicated to the Workers and the Unemployed. 1st February to 3 March.

 The Eykyn McLean gallery will open an antenna in London at 30 George Street with an exhibition of Cy Twombly. 7 February.

 Martin Creed, the winner of the Turner Prize in 2001, is taking over an area in the Tate Liverpool. 24 February to 27 May.

 And of course we are all awaiting the opening of the new offices of Photographers Gallery, on Ramillies Street, designed by Irish architects O'Donnell & Tuomey. Spring 2012

A reference to the world of airports, part comic strip and part science-fiction

CLICK HERE to see around 100 openings this week in France, Belgium and Switzerland

The artistic life of Catherine M.

She became famous, almost overnight, with her Vie sexuelle de Catherine M., published in April 2001. But Catherine Millet had a life before this one, which is very close to the adventure of art press, one of the main reviews of contemporary art. She founded it with a group of friends, among them gallery owner Daniel Templon, her companion at the time, in 1972 (she was then only 24 years old) and is still at the helm forty years later! It is the whole story of the magazine that seeps through this long interview, in which we see a gallery of artists go by (Michel Journiac, César, Jean-Pierre Raynaud or designer Roger Tallon responsible for the first issue), who all reflect the commitments of art press. But we also see characters that do not fit into any category: Hubert Goldet, the first financial support who became a great collector of primitive art, or Louis Dalmas, an owner of swinger clubs, who helped the magazine live through the difficult period at the end of the 70s Among the spicier anecdotes, there is the story of the role art press played in finding the Origine du monde, by Courbet, in 1991, and the moment when the State bought it back.
 Dart press à Catherine M., entretiens avec Catherine Millet avec Richard Leydier, Gallimard, Témoins de lart, 2011, 240 p., 22,50 .

MADRID  The Prado museum will open every day of the week as of 16 January 2012.

PARIS - The SITEM, the International Museum Techniques Fair, will be held from 24 to 29 January 2012 at the Carrousel in the Louvre.

PARIS  The Salon dart abordable (Affordable art Fair) will be held at La Bellevilloise, 20 to 22 January 2012.

PARIS -The galerie Claude Lemand presents the humanist and colorful painting of the Parisian and Algerian painter Abdallah Benanteur. Born in 1931 in Mostaganem, Benanteur was brought up in an Algerian cultural world very sensitive to illuminated works and the written word, to Sufi poetry and to Andalusian music. He left Algeria in 1953, and chose Paris as his capital.