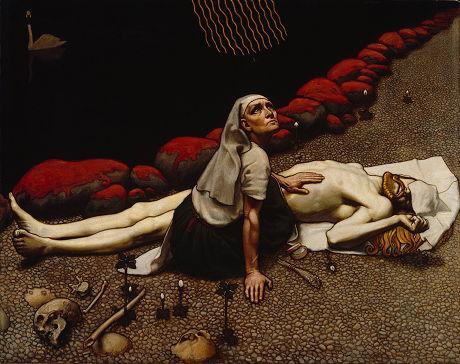 The matter is always up for debate: is Finland part of Scandinavia or not? Our readers will forgive us for chosing to put in this newsletter that came in from the cold (and in perfect coordination with the forecasts announced by the weather man), next to Hammershoi and the Swedish drawers, a major Finnish artist who nevertheless has never been shown in France even though he studied there in his youth. Akseli Gallen-Kallela (1865-1931), who studied at the académie Julian, was then admired for his large compositions in the Finnish pavilion at the Universal Exposition of 1900 (also in Paris), is a sort of Northern cousin of the Mexican muralists. Just like them, he needs large spaces and the inspiration from odes to express himself. Just like them, he rewrites the great founding myths  not the founding of Tenochtitlán but rather the saga of Kalevala  with a type of lyrism nourished by the many influences he received from the Tuscan softness to the exuberance of black Africa.
 Akseli Gallen-Kallela, une passion finlandaise at the musée dOrsay, 7 February to 6 May 2012

COPENHAGEN  Vilhelm Hammershoi (1864-1916) was a revelation for the French public when hs remarkable retrospective took place at the musée dOrsay during the Winter of 1997-1998. The public discovered a stranger from the great North, a worthy manipulator of white lights at an angle, who built interior scenes like still lives. Since then the Danish artist has been reviewed, in particular confronted to Dreyer (at the CCCB in Barcelona in 2007) or during another personal retrospective, at the Royal Academy in 2008. An artist everyone believed to have sprouted out of nowhere, a sort of spontaneous generationfrom the cold countries, was actually a European forerunneri, who travelled and took in all the avant-gards of his time. That is what is presented in Hammershoi and Europe by confronting him to his contemporaries such as Whistler, Khnopff, Carrière or Gauguin.
 Hammershoi and Europe at the SMK, 4 February to 20 Mayi 2012.

 BRUSSELS  At Bozar, Copenhagen X shows the way in which the Danish capitalis an original model in terms of contemporary urban planing and the management of public space. 10 February to 15 April 2012.

 HELSINKI  The watercolors of Carl Larsson (1853-1919), with the little girls in flowered dresses, the sparkling wooden houses, the grand-fathers haveall become symbols of Swedish love of life. The Ateneum presents a selection as well as views made at Grez-sur-Loing during a stay in France. 10 February to 29 April 2012.

PARIS - August Strindberg, together with his Norwegian neighbor Ibsen, is among the most penetrating analysts of the human soul. How can such a monumental figure inspire the graphic creators of our time? That is the question put forward by the Swedish Institute, in work that of course is motivated by the writer's centenial (1849-1912). Malin Biller, Loka Kanarp and Anneli Furmark are among the young comic strip authors who met the challenge of transcribing a complex psychological universe on paper. Throughout the month of February another drawer, Knut Larsson, has been invited to carry out a fresco on the walls of the Institute (the beautiful hôtel particulier of Marle), also in connection with Strindberg.
 La vie nest pas pour les amateurs : August Strindberg interprété par des dessinateurs suédois at the Swedish Institute, 8 February to 15 April 2012.

The first personal exhibition of a young artist, fascinated by rock'n'roll, already seen at the Salon du dessin contemporain

CLICK HERE to see more than 80 openings this week in France, Belgium, Switzerland and Monaco

The taste of metal

PARIS  We knew the Petiet collection of prints that gave birth to an endless series of sales (at Piasa), the book fund of Pierre Bérès or, in the same family, that of Japanese prints (at Pierre Bergé's), and it wealth which always led to repeated bids. The buyers seem to have a liking for these sales by "series" that give way to regular gatherings. This is once again illustrated with the fourth Rullier sale (at Fraysse's), where hundreds of usual objects in steel, bronze and pewter will be put out on the market, with a selection of bronze mortars  the standard example of the XVIIth century was estimated at some 500  (the beautiful Spanish model with the molded belly could go up to 2000 )  and many knockers in wrought iron as well as weather vanes, keys, forces, and other cane knobs
 4e vente Rullier : fer, bronze, fer, étain, haute curiosité 7 February 2012 at Richelieu-Drouot (Fraysse)

COPENHAGUE  Denmark is a land of design. A nice selection can be found at Bruun Rasmussen on 7 February 2012 (armchairs by Poul Kjaerholm, chairs by Hans J. Wegner, lamps by Poul Henningsen, etc.)

The years of Boulle

He greatly influenced (to this date, where his works can still be sold for millions of Euros) French cabinet making: André-Charles Boulle, who lived a long life (he died at the age of 90 on 29 February 1732), lived for 60 years in the galleries of the Louvre even if he did not produce much for the court. This books gives in detail the chronological order of this full life, insisting on the strong moments: his youth spent withhis Dutch father, Jean Bolt, his work for the King, the king's son, the duke of Anjou or wealthy aristocrats such as the Crozat, his short term in prison for not paying his bills, his links to Jean Berain or the fire of 1720, in which were burnt 15 pendulum boxes, an table with ivory inlays and three book cases. The interest of this well illustrated book lies in the numerous reproductions and very specific lay outs carried out by the author (known for this discipline) of the decorations (cabinet doors, desk tops, etc.) that show the decorative wealth - foliage, garlands, bird cages - of the greatest virtuoso of marquetry work.
 André-Charles Boulle, ébéniste, ciseleur et marqueteur ordinaire du roy, by Pierre Ramond, éditions Vial, 2011, 208 p., 85,50 .

ABU DHABI  New delays have been annnounced in the openings of the future great museums on the island of Saadiyat: the Louvre is now scheduled for 2015, the Zayed National Museum for 2016 and the Guggenheim for 2017.

INTERNET  The VIP virtual contemporary art fair (with no physical headquarters) will be held from 3 to 8 February 2012.

PALM BEACH  The American International Fine Art Fair will be held from 4 to 12 February 2012 at the Convention Center.

PARIS  The latribunedelart.fr website reveals the destruction of the statues of the fountain of place de la République by the Paris municipality.

SEVILLA  A project of a 40-floor tower by architect César Pelli, is placing the city at the risk of losing its inscription on Unesco's world heritage list. See the article on urbanews.fr

VENICE - Massimiliano Gioni, assistant director of the New Museum ine New York, has been named commissioner of the next Biennale of Venice.