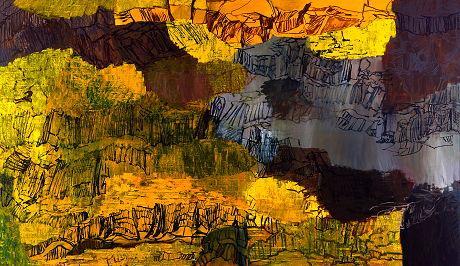 There was a time when a group named Cobra, led by Appel and Jorn, could symbolize the vitality of Nordic capitals: Copenhagen, Brussels, Amsterdam. That fraternity between neighbors lives again today in another way, with the Danish presidency of the European Union. Indeed, it is in Brussels that Per Kirkeby, one of the well-known names of the Danish scene, is being celebrated. The former student in arctic geology, whose art in stratigraphies and superimpositions is greatly influenced by his travels to Greenland, exhibits nearly 200 works in which Nature and architecture answer each other systematically. The color explosion and the spontaneity of the trait inevitably remind us of Cobra even if Kirkeby, clearly influenced by Asger Jorn, refuses categorically to be catalogued in one or various styles At the press conference he was rather proud as a matter of fact to bring back a remark he heard from one of the workers in charge of hanging up his paintings: "It is the exhibition of a Spanish writer"

The imaginary universe of Klee, the child, at the Cobra Museum (Amstelveen, Netherlands), from 28 January to 22 April 2012.

BE CAREFUL LAST DAYS! UNTIL 12 FEBRUARY... Do Not Miss... BERTHE MORISOT; for the first time in Spain, a great lady of the Impressionist movement at the THYSSEN-BORNEMISZA MUSEUM in MADRID. See the article in Art Aujourd'hui

BRUSSELS - Cy Twombly, with the both mysterious and unpronounceable first name that his mysterious graphics seem to extend, experienced a large public recognition shortly before his death last summer (retrospective at the Centre Pompidou, matter of the red kiss on one of his white canvases at the foundation Lambert, in Avignon, etc.) Her we have another aspect of his talent: large Polaroid photographs which he took for nearly 60 years (by treating them with a personal process), even though he only accepted t show them very late in life. Still lives, practically i<>bodegones, bouquets of flowers, interior scenes in the Flemish style, vibrant and blurred images make for an atmosphere that could be defined as dream like without insulting such a debased adjective
 Cy Twombly at Bozar, from 1st February to 29 April 2012.

Art of the day also recommends in the Netherlands

 HAARLEM With Celebrating in the Golden Age, the Frans Hals museum examines one of the favorite themes of XVII century painters. Until 6 May 2012.

PARIS  Certain painters write, and even quite well as did Michael-Angelo, Delacroix or Kokoschka. But we can also have the reverse, i.e. writers who draw. That is the red line of the collection gathered by Pierre and Franca Belfond, now scattered. It was more than varied, including a portrait of Jeanne Duval by Baudelaire (estimated between 50 000 and 80 000 ) as well as a jungle in Chinese ink by William Burroughs, the pope of the beatniks (3000 ). Caldwell, Cocteau, Daumal, Henry Miller, Henri de Monfreid or George Sand are other aspects of this strange initiatory journey in 135 lots, of which the climax will be Arthur Rimbaud and his Young coachman in London expected to go for more than 120 000 .
 Dessins décrivains, collection Pierre et Franca Belfond at Artcurial on 14 February 2012

ANTWERP  We expect to see her in the movie section, following the opening of her movie La Folie Almayer inspired by the work of Joseph Conrad. But Chantal Akerman has enjoyed confusing others with strange clues for some time. In her portrait recently published in daily newspaper Libération, she had significantly confessed regarding her first movie, Saute ma ville, shot in one day at the age of 18 in 1968, that she had wanted to «blow up» a fence and found as a lead to her documentaries: «People who wish to cross borders». Akermans relations with the other forms of art are not new as could be seen at the Palais des Beaux-arts in Brussels in 1995, at the galerie Marian Goodman, at the Biennale of Venice or at Documenta 11 in Cassel. The Mukha presents a new selection, combining photograms of films or installations with multiple screens.
 Chantal Akerman, Too Far Too Close at Mukha, from 10 February to 10 June 2012.

Art of the day also recommends in Belgium...

 BRUSSELS - Eduardo Matos and André Cepeda explore the figure of Canal at the Espace photographique Contretype. From 1st February to 4 March 2012.

 LOUVAIN - Patrick Van Caeckenbergh, his collages and his fantastic sculptures are presented at M under the title La ruine fructueuse. From 2 February to 22 April 2012.

The Italian artist, used to playing with masks and metamorphoses, raises questions about identity, reality and illusion

CLICK HERE to see more than 70 openings this week in France, Belgium and Switzerland

Artists have always taken architecture seriously  the recent exhibition at the Thyssen-Bornemisza museum and at Caja Madrid on «painted architectures» prove it. Some of them have even been visionaries in the matter  we immediately think of Piranese or Robert Storr, a brut artist currently exhibited at the Baudoin pavilion in Paris. The present work shows that architecture and urban development have hardly ever inspired contemporary creators as much. He presents some one hundred of them, from Simon Bent to Erwin Wurm, including Bechtold, Boudvon and Op de Beeck, who use it as a permanent stimulus to their creativity. Using sand (Jenny Berntsson), computers, materials, cardboard or video cassettes (Mounir Fatmi), they rebuild or interpret a world that is - with its towers, high-rise blocks, its interchanges, its slums -, sprawling, impersonal, breathtaking Is there still a place for the human being?
 Villes imaginaires et constructions fictives, directed by Robert Klanten and Lukas Feireiss, Thames & Hudson, 2012, 208 p., 45 .

 BOLOGNA The History Museum of the city opened on 28 January 2012 in the Palazzo Pepoli, redesigned by architect Mario Bellini.

 PARIS - The antiques fair Paris Fine Art will be held at the Palais des Congrès from 10 to 20 February 2012.

 QATAR - According to Vanity Fair, the royal family of Qatar acquired the last version of Cézanne's The Card Players still in private hands for over $250 million, the highest price ever paid for a work of art.