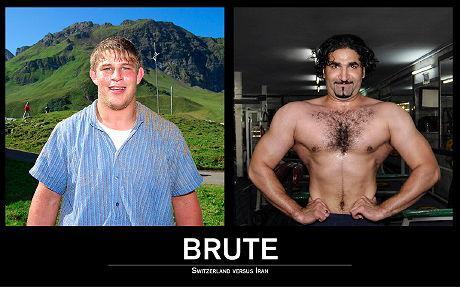 Riverboom, Brute, Switzerland Versus Iran, from the series Switzerland versus The World (festival Circulations, Paris)

A panorama of young photography

In just a few years photography has imposed itself as a major discipline on the art market and the circuit of the major exhibitions. The Rencontres dArles, pionneers since 1969 (July), Contact in Toronto (May), Photo España in Madrid (June), the London Festival of Photography (June), Visa pour lImage in Perpignan (September) or Paris Photo (November) have become the major festivities of the year in this field. The events concentrated for a long time on the months with nice weather, but now they tend to thicken out over the full year and even survive in the cold The Rencontres de Bamako closed on 1st January but as teh winter comes to an end, we can linger by Exposure in Calgary and, in a few days, visit the Biennale of photography in Helsinki, then in April head to the MOPLA in Los Angeles that will focus on the links between photography and High technology In this wealthy program, we see the festival Circulations slip in in Paris, with Young European photographers. This year, the one of its 2nd edition, it presents 43 little known creators from which certain future stars will emerge.

CALGARY-The Exposure festival will be held until 29 February 2012.

HELSINKI-The Biennale of Photography will be held from 2 March to 30 April 2012.

LOS ANGELES-The MOPLA, the month of photography, will be held in April 2012.

PARIS-The Circulations festival will be held from 25 February to 25 March 2012 at Bagatelle.

PARIS  Following Claude Cahun or Diane Arbus, the Jeu de paume pursues its exploration of the feminine universe of photography. Berenice Abbott is the new star: a personnality with a long longevity (1898-1991) and varied interests. While we know her links with Man Ray or her portrait of New York during the big crisis, we must also remember the important role she played in saving Atgets work. In 1927-29, at the time when the most Parisian of all photographers was not the posthumus star he is today, she was the one to buy the negatives that had been snubbed and ensured their distribution. Out of the nearly 120 images in this retrospective, the least known part is probably the «road trip» she took with her companion Elizabeth McCausland in the fifties, covering the whole East coast of the United-States, over the US1, from Miami to the Canadian frontier.
Berenice Abbott, from 21 February to 29 April 2012.

 AMSTERDAM  The Van Gogh museum explores an essential current at the end of the XIXth century, Symbolism, in its treatment of landscape. From 24 February to 17 June 2012.

 LONDON  The Tate Modern welcomes Alighiero Boetti (1940-1994), an Italian artist who is unclassifiable in spite of his links to Arte Povera, and whose quotation never ceases to rise. From 28 February to 27 May 2012.

 LYON - Robert Combas, a prolific exponent of Figuration libre, will enjoy at the musée dArt contemporain, the larg retrospective he has been awaiting for a long time. From 24 February to 15 July 2012.

 NEW YORK  A busy week with the opening of two large exhibitions: Cindy Sherman, who loves to multiply his identities in numerous ways, at the MoMA (from 26 February to 11 June 2012) and Rembrandt & Degas at the Metropolitan Museum of Art (from 23 February to 20 May 2012), which confronts the portraits of youth of the two masters.

Cindy Sherman at the MoMA

Rembrandt & Degas at the Met

 ROME  The Scuderie del Quirinale present one of the masters of Renaissance painting, Tintoretto, Veronese's rival. From 25 February to 10 June 2012.

 ROVIGO  Hardly known by most tourists, this town in the Venetia region welcomes an interesting exhibition on Italian Divisionism. From 25 February to 23 June 2012.

Not to be missed: the exhibition «memyselfandI» from 5 March to 10 June, at the Picasso museum in Malaga, on the portraits of Picasso by major photographers

Not to be missed: the exhibition Etats d'âme at the galerie Basia Embiricos in Paris, from 23 February to 23 April 2012, presenting vintage prints by David Douglas Duncan.

Billboards, a life before photography

PARIS  Prior to the arrival of photography, billboards were reserved to the educated class: one needed to know how to decypher the posters that announced the recruitment of doctors, the sale of rabbit skins or of South American wood for dyeing  The sale on 23 and 24 February gives a remarkable glimpse through its 654 lots, combining notices to the public, waybills, war declarations and calls for volunteers to enlist, decrees, prohibitions and declarations (such as the one by Gambetta, in Bordeaux in 1871, regarding the armistice, «more sinister and more painful than the fall of Paris», (lot 646, estimated at 400 ) or the program for the «national Holiday on 15 August» (Saint-Napoleon) in Lyon in 1855. Prices remain moderate, even for an edict from the King in 1690 (lot 16, 200 ), which shows that already at the time, prints were made in large numbers
 Rare collection daffiches et de placards, 23 and 24 February 2012 at Drouot-Richelieu (SVV Castor-Hara)

Eric Pillot, from the series "In Situ". Courtesy Eric Pillot.

Eric Pillot, the animal and us

The prestigious Paris engineering school Polytechnique can open all doors: in any case it seems to be the case for Eric Pillot, the co-winner with Leonora Hamill of the HSBC 2012 photography prize, awarded on 15 February. Following a first life as an engineer, this doctor in mathematics found in photography, which he started practicing at a later stage, the means to give free reins to a personal way of making a catalogue out of our environment. For the last two years he has been taking animals in the zoo as the object of his snapshots, which he then immortalizes in the square format. This is not to knit a tale about imprisonment but rather to see our close cousins facing our one big fear  solitude  in a highly staged context, somewhere between a monks cell and a kitsch aesthetics.
 The winners of the HSBC prize will be exhibited at galerie Seine 51 (Paris) from 14 June to 7 July 2012. Catalogue to be published by Actes Sud in early September.

Also to see in photo galleries in Paris...

 Camera Obscura pays a tribute to Lucien Hervé, the photographer who was inseparable from Le Corbusier, through his contact sheets. Until 25 February 2012.

 Christopher Anderson presents at the galerie Magnum his approach on the theme of childhood and birth, seen through the prism of his personal experience. Until 14 April 2012

 The galerie Vu shows the Ethiopia of Juan Manuel Castro Prieto (since 3 February) and the Peru of MartÍn Chambi (as of 1 March). Until 31 March 2012.

 Erica Lennard, know for her photographs of gardens, exhibits her elegant women at the Agathe Gaillard gallery. As of 3 March 2012

 Jean-Christophe Béchet shows at the galerie Photo4 his American landscapes, in which the road becomes the main character. As of 8 March 2012.

The relationship between Picasso and photographers could give way to a whole field in litterature: we know of his friendship with Brassaï, Doisneau, Lucien Clergue, Cartier-Bresson, André Villers The one that grew with David Douglas Duncan, though in the later years (it was in 1956, Picasso was then 75 years old and the photographer, a veteran of the wars of Korea and Vietnam, was 40 years old), was extraordinary in its capacity to record every day life. We see Picasso eating fish (without leaving a gram of meat on the bone!), setting out ceramics, holding the jump rope for his children or simply smoking his Gauloise cigarette Death did not dilute the friendship: Duncan spent a week to immortalise the masters workshop the day following his death and he dedicated himself to reproduce his works up to the 80s.
 Picasso à luvre. Dans lobjectif de David Douglas Duncan, directed by Stéphanie Ansari and Tatyana Franck, Gallimard, 2012, 264 p., 39 .

 FRANCFORT  The contemporary art collection of the Städel Museum will reopen on 29 February 2012 in a building designed by architects schneider+schumacher.

 MADRID  The copy of Mona Lisa recently discovered at the Prado museum will be shown there to the public from 21 February to 13 March 2012 before been lent to the Louvre for the exhibition dedicated to the Saint-Ann of Leonardo da Vinci (as of 26 March 2012).

 MADRID - Antonio Banderas will play the part of Picasso in the movie 33 days, directed by Carlos Saura and focused on the creation of the painting Guernica during the Spanish Civil War.

Read the article in Vulture.com

NEW YORK - Sotheby's has announced the presence of the last version of the Scream by Edvard Munch still in private hands in its sale on 2 May 2012. The pastel is estimated at 80 million .