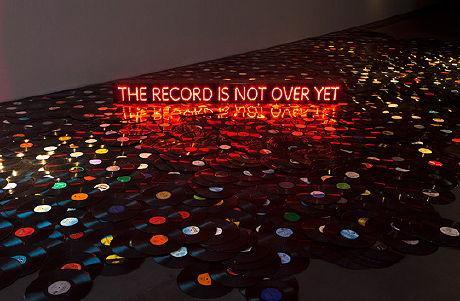 Eduardo Balanza, The Record Is Not Over Yet, 2011. Photo: FNG/CAA, Pirje Mykkänen. Courtesy Kiasma, Helsinki (exhibition Thank You for the Music)

Music has always inspired visual artists  just think of the «Frise Beethoven» by Klimt. This is true the other way around as well and we can now see a growing number of transversal exhibitions, very much in fashion, that show how disciplines that once were greatly put into compartments are now mutually influenced. We have rarely seen as many retrospectives that combine cinema (David Lynch and Kitano were a blockbuster at the fondation Cartier, and Tim Burton at the MoMA, before arriving soon at the Cinémathèque française in Paris), theatre arts («Theater in painting in the XIXthe century at the Mart» in Trento or «Flamenco Night» at the Reina Sofía in Madrid) and, recently, music From Laurie Anderson at the Barbican to Annie Lennox at the Victoria & Albert Museum, the exception is becoming a rule and the event dedicated to Debussy at the Bibliothèque nationale de France is another perfect example. It shows how the composer of Pelléas et Mélisande, influenced by Bakst, Redon or the Impressionists, carried out his revolution, in which notes became colors

HELSINKI  Based on a title from Abba, Thank you for the music, the Kiasma Museum explores the relation of contemporary artists to music. Until 17 June 2012.

MADRID  The Caixa Forum welcomes a retrospective on a pioneer movement in the fusion of the arts: Les Ballets russes de Diaghilev. Until 3 June 2012.

PARIS - With Danser sa vie (Dance ones life), the Centre Pompidou presents a monumental fresco on the relations between dance and the arts throughout the XXth century, from Nijinski to Jan Fabre. Until 2 April 2012

PARIS  Following its success at the MoMA in New York, the Tim Burton retrospective has arrived at the Cinémathèque française. From 7 March to 5 August 2012.

POSSAGNO - Canova et la danse, at the museum dedicated to the neo-classic sculptor, studies one of his main sources of inspiration. From 3 March to 30 September 2012.

PARIS -How could we ever live today without the radio? The exhibition at the musée des Arts et métiers, dedicated to the history of radio broadcasting in France, draws the portrait of a world in which sound plays a dominating role. We do not mean the sound of crafts, nor of the land, off the streets or the bell tower, but multiplied sound, spread out, amplified like an echo that filters through all of society. The revolution of the radio waves is looked at from its technical angle  the instruments that made it possible  and the human one. In the first category we see the wireless of the 20s, lamp receivers and HiFi victrolas while José Artur, Lucien Jeunesse or the speakers from the BBC (during the war) became new French household names.
 Radio, ouvrez grand vos oreilles ! (Radio, open up your ears), at the Musée des arts et métiers, from 28 February to 2 September 2012.

CUENCA  At the Museo de Arte Abstracta, Fotomontaje de entreguerras (1918-1939) (Photography editing between the two wars) shows how censorship and rising conflicts gave an impulse to the discipline of collage. From 2 March to 27 May 2012.

FLORENCE - Americani a Firenze: Sargent e gli impressionisti del Nuovo Mondo underlines the very close link between the American avant-gardes of the XIXth century and the Tuscan landscape. From 3 March to 15 July 2012.

PARIS - Patagonie? It symbolises the tip of the earth. The musée du quai Branly studies the myth and its reality. From 6 March to 13 may 2012.

PARIS - Miniatures flamandes (Flemish miniatures) brings together collections that are now scattered between the Bibliothèque royale of Belgium and the Bibliothèque nationale de France (where the exhibition is held). From 6 March to 10 June 2012.

VILLENEUVE-D'ASCQ - Displace-unfold-discover presents five original figures from the French scene, among them Simon Hantaï, a specialist in crumbled papers. From 3 March to 17 June 2012.

A cascade of violins

LONDON  When talking of a great violinist, the name of the violin she /he plays is often given: Isaac Sterns Guarnerius del Gesù (today in the hands of Renaud Capuçon) or the Stradivarius once stolen from Pierre Amoyal, are stars in their own right. The extraordinary longevity of Italian string instrument makers explains why we regularly see examples show up at auctions at prices that may sometimes seem dumbfounding (nearly 10 million £, i.e. 11 million , on 21 June 2011 in London at Tarisio Auctions for the «Lady Blunt» Stradivarius from 1721), are easily as valuable as paintings by the great masters. The selection presented on 6 March at Sothebys is much more conservative: the highest estimate is made for an Amati from 1682, at 250 000 £, ahead of a Jean-Baptiste Vuillaume from 1846, a copy of a Guarnerius, at 80 000 £. But you may also bid, for fifty or one hundred times less, for a Simonazzi or a Postiglione, creatures by makers much more accessible.
 Musical Instruments at Sothebys on 6 March 2012.

 Not to be missed: the current auction at Tarisio Auctions, where the record prize was reached for the Lady Blunt in 2011.

Combas, art on the beat

There are countless contemporary artists who are marginal to visual arts and sound, from Céleste Boursier-Mougenot (with a current installation at the Collège des Bernardins) to Eric Samakh and his flutes that play to the light of the sun. We would not spontaneously include the prolific artist Robert Combas in this category. And yet, the way his retrospective is presented in Lyons (300 works over 3000 square meters!) shows how the musical universe has played an important role in his unrestrained creation. The artist composed the background sounds for the exhibition and has promised to be present throughout its duration, in a workshop that is also a recording studio, in order to produce paintings and sound clips. This is one way of confirming his declaration: «My painting is rock».
 Robert Combas, greatest hits, from 24 February to 15 July 2012 at the Musée dart contemporain.

Dulce Pinzon, the real story of the superheroes

The immigrant workers who work very long hours for very low wages in order to sustain their family - aren't they the real superheroes? The Mexican photographer Dulce Pinzon gives her answer.

Click here to see more than 100 openings this week in France, Belgium, Switzerland and Luxembourg

Massenet, music at the turn of the century -the other century

PARIS  Born in Saint-Etienne and the son of a blacksmith, he woke up to music with the «noise of the bronze hammer». This did not prevent him from having a great success during the French Third Republic, from the opening of the Roi de Lahore in 1877 up to his demise in 1912, in his apartment in the rue de Vaugirard. Thaïs, Manon, Hérodiade and other operas were on the billboard of the opera houses in Paris, Brussels, Vichy or Monte-Carlo before falling into oblivion just as quickly following the composers death. This book, which accompanies an exhibition at the Bibliothèque nationale de France, shows the huge machinery that accompanied his productions, with a great science for the costumes, jewels, and posters that still continue to impress us. Paul Nadar, Orientalist painter Georges Rochegrosse or Eugène Grasset (for the decors of Esclarmonde) are among the great artists who contributed to his creations.
 La Belle Epoque de Massenet, directed by Christophe Ghristi and Mathias Auclair, Gourcuff-Gradenigo, 2011, 240 p., 39 

CHICAGO  The 2012 Pritzker prize, the non-official noble prize in architecture, has been awarded to Chinese architect Wang Shu.

MADRID - The treasure of the Santa Maria de las Mercedes, a Spanish frigate sunken in 1804, recovered by Tampa-based Odissey Marine Exploration in 2007 and handed back to Spain by an American court, has arrived in Madrid on 25 February 2012.

Read the article in El Pais

PARIS-LA DÉFENSE  Artist Vincent Treu, invited to show his monumental sculptures on the square of the Défense district on the Paris outskirts at the end of 2010, has been condemned to pay an occupation fine of 540 000  for having left one of his works in situ.

PARIS - Alain Seban has been confirmed for a new term as head of Centre Pompidou on 29 February 2012.

Read the article in Les Echos