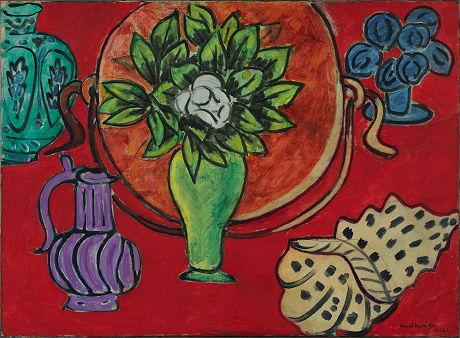 Matisse, Klimt, Degas, Turner: the return of the great masters

They seem to bloom like flowers in the spring: they come back every year, stronger than ever. These are the heavyweights of Western painting whose sole presence is enough to fill a museum and ensure it of a precious financial support in these times of economic struggle. In just one week in this month of March, four or five of these «blockbusters» pop up, and the difficulty that remains is to do something new with things that no longer are. How can one surprise or dazzle the public when the Master concerned has been the object of dozens of retrospectives? By «angling», of course: whatever the theme chosen, as long as it is not too over-heated, success is sure to be met. We have reason to expect it with Degas et le nu, given the inflammatory dimension in the title, or Matisse paires et séries, which explores the game of doubles with the former Fauvist artist. Klimt, in the midst of his year of celebration, will spoil us with his drawings. As for Turner, we easily bet on his success in the confrontation to another « monster », le Lorrain. An old proverb does say that March weather defines your harvest. This year of exhibitions promises to be a beautiful one

THESE EXHIBITIONS ARE ALSO OPENING...

Sert, the painter of the immense

PARIS  His sentimental life is at least as fascinating as his artistic success. He was married to Misia Godebska, one of the muses of the turn of the century the XXth that is. He then had a «ménage à trois» with Roussy Mdivani, a beautiful Georgian, whom he ended up marrying and who opened the doors of Hollywood for him. A friend of Diaghilev, Dalis, Cocteaus and Stravinskys, Catalan artist José María Sert (1874-1945) set up early in Paris, and had an impressive address book: the Rothschilds, RCA, the Rockefellers, the King of Spain. It seemed impossible to exhibit this apostle of giant decorations. How could such huge paintings be displaced? The challenge was met with les Quatre Saisons (the Four Seasons), which used to ornate the Rothschilds castle of Laversine or la Belle Maraîchère (The Beautiful vegetable vendor) as well as a great number of wood models, minutely prepared (the cathedral of Vic) and photos that illustrate its operating mode.
José Maria Sert, le Titan à luvre at the Petit Palais, 8 March to 5 August 2012.

 AMSTERDAM  Based on the rich funds of the Rijksmuseum, Ottomania shows how the image of the Turk has evolved in the West between the XVth and the XVIIIth centuries. From 7 March to 1 May 2012.

 PARIS - Artemisia, the daughter of Orazio Gentileschi, an excellent painter in her own rigth, is the object of an ambitious retrospective at the musée Maillol. From 14 March to 15 July 2012.

 PARIS  After being shown in Madrid, the retrospective Berthe Morisot that presents in particular superb landscapes and decorative works of her mature years, arrives at the musée Marmottan Monet .From 8 March to 1 July 2012.

 PARIS - Arles, les fouilles du Rhône shows the Roman treasures found during the digs in the rivers over these last years. From 9 March to 2 July 2012.

PARIS  The market of letters and manuscripts is in full expansion  is it spring ?- as we can see with the numerous auctions and the recent opening of the Musée des lettres et manuscrits in Paris, the twin of the one in Brussels from 2011. While major pieces may sell for very high prices (the Manifeste du surréalisme at 3.6 million in 2008, the manuscript ofOn the Road by Jack Kerouac at 2.5 million), there remains a remarkable reservoir of pieces at reasonable prices. The present auction for example only has 10 lots estimated at more than 1000  out of a total of 259, of which a «feminist» manuscript by Victor Hugo from 1872 (7000 , lot 48). When the same author writes about his move in 1874, he only costs 500  (lot 53) A debt recognition by Maximilien de Béthune, the duke of Sully and the inventor of the poule au pot (King Henri IVs favorite boiled chicken)? It is a fragment of history evaluated at less than 500  A letter by George Sand to her doctor, notices by Athanase Fouché regarding her father, the duke of Otrante, missives by Lacordaire and Lamennais, from marshalls Bernadotte and Berthier: the choice is as varied as it is economic unless a contest develops over an unexpected lot such as this demand by José Maria de Heredia to the Figaro newspaper or this commentary by economist Richard Cobden on the reforms by lord Palmerston.
 Manuscrits et autographes at Richelieu-Drouot, 14 March 2012 (Lafon-Castandet)

With a name that could make us dream of countryside and tradition, Claire Fontaine does not let us on to what she hides: a group of artists focused on questioning the sense of contemporary art, its reproduction, its coverage by the media. As can be seen in their most recent exhibition that opens at both of Chantal Crousels spaces, their operating mode is not to create but rather to transform what has already been done. This is a way for spectators to review their classics and to look differently at founding moments. Equivalent VIII for example, by minimalist artist Carl Andre, at the origin of a unique debate in England in the 1970s  who remembers? This assembly of refractory bricks triggered off a general outcry when the price the Tate Gallery paid for it in 1972 was known: 5 000 £ (it was a year of strikes by miners, a miners average salary was 100 £ per month). In 1976, the Daily Mirror mounted a real conspiracy against this "load of rubbish". Claire Fontaine comes back to this matter by using 120 bricks in her own manner, puts book covers on them or produces silk imprints inspired from documents of the time. Her way of proceeding takes us back to the heart of the question that motivated conceptual artists following in the steps of Duchamp: what is art?
 Claire Fontaine, Généralités at the galerie Chantal Crousel, 10 March to 21 April 2012.

Who is this Saint?

We wait impatiently for the monumental book, the Iconographie de l'art chrétien by Louis Réau and its five volumes to be printed again. It traces all Saints, from the most famous to the least known (among them saint Cyr and Saint Julitte). In the meantime those of us who are completely disconnected from the repertoire of motifs used in painting during a century and who are incapable of making the difference between the Annunciation and the Visitation should start leafing through this Vademecum. It is not entirely religious as there is also mention of the death of Catton or the murder of Cesar. But they will find the main episodes of the holy history, illustrated by Western masters, from Giotto up to Rouault and Chagall. We do regret certain major omissions  such as Toby and the Angel, Saint Peter the Martyr with his skull cut, Saint Lucie with her eyes on a platter), and we would have liked to have a richer iconography. What can Josue blocking the sun look like?
 Guide iconographique de la peinture, by Nanon Gardin and Guy Pascual, Larousse, 2012, 240 p., 27 .

NEW YORK  The Armory Show, the modern and contemporary arts show, will be held from 8 to 11 March 2012.

POMPEI - The Thermes of Stabiane, the oldest thermal baths of the city, will reopen on 8 March after a restoration campaign.