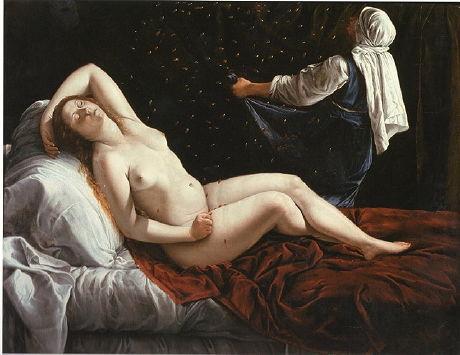 The calendar must have been planed to the last detail. This new exhibition oens right after March 8th, Woman's day sice the UN declared it as such in 1977. The artist is no less than Artemisia Gentileschi (1593-1652), an emblem of feminism in painting, a strong woman who traced her own destiny against all odds -including the jealousy of her peers and her own rape when she was a young girl. Agnés Merlet made a movie on her in 1997. She is one of these icons who transcend her time and can only be compared to Frida Kahlo or Camille Claudel, other art passionarias. Artemisia painted Bibe heroines who kenw how to deal with men, such as Judith, Dalila or Bethsabel.But not only them. She also paintd the sweet female faces of musicians or thinkers. The retrospective also includes certainknights in armor who take a second row on the podium. We have her own father, Orazio, Simon Vouet, Massimo Stanzione or Benjamin Cavalino. But not the man who raped her, Agostino Tasso,who not only was condemned at the time but who has been punished a second time, since his work is estimated five times less than his victim's in the transactions on the art market.
 Artemisia Gentileschi at the Musée Maillol, 14 March - 15 July 2012.

THE EXHIBITIONS THAT ARE OPENING

BE CAREFUL! LAST DAYS, UNTIL 25 MARCH 2012... DO NOT MISS... BALDWIN/GUGGISBERG Beyond glass: three decades of a duo of masters in glass blowing at the MUSEE ARIANA in Geneva. Read the article in L'Art Ajourd'hui

The feminine version of the Pacific Coast

BERLIN - What was the feminine element in the avant-gard movements of the West coast? This is an interesting filter to place on the exhibition "Pacific Standard Time", that just reached Europe crowned by its success in California (in a reduced version sinc eit is being presented on one single site and not in dozens of locations). Whether we refer to performances to protest against the war in Vietnam (Suzanne Lacy and Leslie Labowitz-Starus), the vitality of the campuses as nests of creativity(with Martha Rosler in San Diego) or even the commitment of audacious collectors (in the footsteps of Betty Asher), a history of art in America after the war can surely not be drawn up in the masculine gender. But male chauvinists need not worry: with John Baldessari to Richard Diebenkorn, including Bruce Naumann and Edward Kienholz, they still have matter to deal with ...
 Pacific Standard Time, Art in Los Angeles 1950-1980 at Martin-Gropius Bau, 15 March - 10 June 2012.

 BERNE - Minimalist artist Sean Scully, known for is colored strips, is the object of a restrospective at the Kunstmuseum with nearly sixty large formats. From 9 March to 29 June 2012.

 FERRARA - Joaquín Sorolla, influenced by the Impressionists, became one of the best Spanish landscape and portrait artists, as can be seen in this retrospective at the Palazzo dei Diamanti. From 17 March to 17 June 2012.

 LUGANO - The career of Giorgio Morandi is presented at the Museo d'Arte, and enriched by confrontations with contemporary artists such as the Becher or Rachel Whiteread. From 10 March to 1st July 2012.

TEFAF for a happy few

MAASTRICHT - Each year figures fall and set new records and each year the articles are the same For this edition of the jubilee, 260 galleries, 18 countries, 175 experts in charge of controling the quality of the merchandise exposed, 640 pages in the catalogue, over 70 000 visitors expecteds. The price of the admission ticket has not been hiked: 55 (with a rate for "young" visitors at 20). Born in 1975 in the form of a small Pictura Fine Art Fair, the event known now by the unattractive name of TEFAF (The European Fine Art Fair) since 1988, is doing so well it is practically an insolence. Greece's financial nightmares, the difficulties of young gallery owners or the daily struggle of the upkeepers of Pompey to save their dying patrimony  in short, all tha tis part of the world news -, is heard very far away when oen is here, something like a distant storm. The most exclusive art seems to be immune to the crisis. On the other hand, as far as gender equality is concerned, TEFAF is not an example: among the six representatives in the Showcase, a section that is meant to represen young up-going gallery owners, only one, Didier Antiques of London, has a combinedmanagement
 TEFAF at Maastricht, from 16 to 25 March 2012

PARIS - Here is an artist who had an honorable career, who was invited to the Biennale of Venice in Venise by Arturo Schwartz, an emblematic figure of Italian surrealism, a collector, a gallery owner and a friend of Breton's. So why is her work not worth more at auctions? One can only wonder, as the fund of the Aligne Gagnaire workshop (1912-1997) isup for sale. Her rate on artprice does not even reach 1000 Yet she associated her name to certain adventures of the moment, when she participated during the war to la Main à plume, a publication that brought together the most diverse personnalities, such as Dotremont, Eluard, Léo Malet, Maurice Nadeau and Gérard Vulliamy (another forgotten artist recenty rediscovered in an exhibition in Besançon) or at Oupeinpo (Ouvroir de peinture potentielle). His pictogrames remind us of Michaux, his wrinkled canvases have something of Kijno, his very pure, white reliefs and his collages are a certain sincerity that should attract collectors interested in that period.
 Atelier dAline Gagnaire 19 March 2012 at Drouot-Richelieu (SVV Yann Le Mouel).

What pushes a person to collec art? Following the model of her book on gallery owners, Anne Martin-Fugier leads her investigation through dialogues with a few choice guinea pigs. Consequently, the reader must reach his own conclusions based on personal cases such as Antoine de Galbert, the founder of the Maison rouge, or Gilles Fuchs, at the head of the Nina ricci house, who took advantage of his professional trips to meet gallery owners and visit workshops, and who would become the soul of the Marcel-Duchamp prize. We are no longer in the times of Artemisia: the role of women in ths case is of essence, as we learn through the case of Florence (with Daniel) Guerlain or Françoise (with Jean-Philippe Billarant), who greatly influenced the purchasing procedure. The book is enriched with various anecdotes, some of them tragic such as the case of Claude & Micheline Renard whose paintings were sold to pay for the operation their daugter needed after being touched by a bomb set by the OAS); or unusually judgemental opinions on the actors of the art market, such as painter Barthélémy Toguo, or Liliane Durand-Dessert, etc.) The book shows that to be a collector one does not necessarily need t have a lot of money and follow the market, but rather to have encounters and follow one's passions.
 Collectionneurs, by Anne Martin-Fugier, Actes Sud, 2012, 304 p., 22 .

In his second personal exhibition in the gallery, the artist brings back to life a 500 million year-old, fossilized creature.