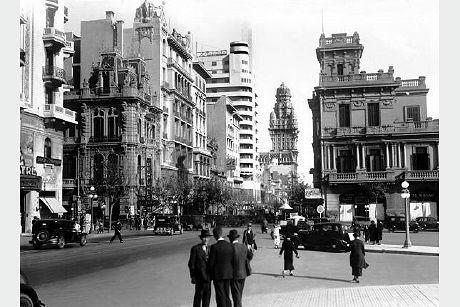 This city with a well sounding name lingers in the European imagination through the grace of the writers who were born there Lautréamont, Laforgue, Supervielle  but its power of memory goes no further  Yet, while the monument to the three French poets is slowly falling apart behind the rambla, the Uruguayan capital seems to be coming out of its long lethargy. The Solis theater, a jewel of the Belle Epoque, has recently been restored, the Ballet national of Julio Bocca is a reference and the young movie directors align their international awards. New museums and cultural centres leave far behind the time when constructivist artist Torres-Garcia alone symbolized the art of his country. We rediscover Figari, Gurvich, Paz-Vilaró, and soon Barradas, while the industrial patrimony is being reconverted: former cold warehouses for meat are being turned into recreation centres, associating stylists, painters and musicians. While the Xippas gallery, one of the heavy weights of the European market, has just inaugurated an area in the old town, and a new event has been announced for the end of 2012: the first Biennale of contemporary art. Montevideo is bored of acting out Romantic nostalgia

Crumb and the amazone with plaits © Robert Crumb

Robert Crumb, in tribute to the underground

PARIS  This retrospective seems perfectly designed to finally recuperate one of the harbingers of counter-culture Robert Crumb (born in 1943) is not as well-known as his emblematic character, Fritz the Cat, the permanent rebel born in the unsubordinated atmosphere of the sixties. Yet, the New York drawer who settled in France over two decades ago has not limited himself to draw record covers and underground fanzines (like the famous issue of Zap, entirely drawn). He has salvaged a crude and iconoclastic vein and produced with his wife Aline Kominsky Parlez-moi damour, in which together they decipher married life. But he has known at the same time how to approach a monument such as the Genesis, which required a good number of years. The exhibition shows these different strong points of his career as well as the notebooks with his sketches and his rarely shown drawings, which help us understand his way of working.
 Robert Crumb at the musée dArt moderne de la Ville de Paris, 13 April to 19 August 2012.

Art of the day also recommends these exhibitions

The Titanic is back in Cherbourg

CHERBOURG  The Cité de la Mer inaugurates its new space by dedicating an exhibition to the Titanic, exactly one hundred years after it made a stop there. As of 10 April 2012

The window in art

DUSSELDORF  How did artists take hold of an ordinary motif to turn it into a classic: such is the question put forward in The window in art since Matisse and Duchamp at the Kunst Sammlung. 31 March to 12 August 2012.

The street as seen by Lewis Hine

MADRID  Those who missed it in Paris at the fondation Cartier-Bresson will be able to see the retrospective dedicated to Lewis Hine, the pioneer of social photography, presented at the Fundación Mapfre. 11 February to 29 April 2012.

Composition to the glory of G. B. Cassini in paper and cartboard under glass representing a portrait of Cassini and the attributes of astronomy. 26 x 44.5 x 9 cm. Estimate: 1300.

The beauty of the scientific object

PARIS  Technical objects hold a certain poetry, that which inspired Lautréamont as well as Marinetti, and it is not rare to discover spectators of scientific sales are also experienced art lovers. Consequently, more than one will be attracted by this selection that is partly from a private collection and that is truly homogeneous. From a simple serpentine tube in blown-glass, used by Italian chemists in the XIXth century (as of 50), to the superb Persian astrolabe from the beginning of the XIXth century (estimated at 20 000) including a Florentine polyhedral dial or an ivory Wilson microscope with a turning handle from the XVIIIth century (600), the choice through rime and space is very wide. When considering all the inclinometers, tacheometers, densiometers, fleximeters and all sorts of graphometers, the mystery resides in the names of the objects as much as in their use
 Sciences et techniques at Richelieu-Drouot (Chayette & Cheval) 13 April 2012.

 The art of Richard Nonas is a tentative to occupy a venue. This is the definition given by the curators during the artists recent exhibition at the museum of modern art of Saint-Etienne Métropole (2010), and is probably the one that best corresponds to the activity carried out by Richard Nonas (born in 1936 New York). In a previous life he was an anthropologist, travelling from the North Pole to Mexico. And a certain thirst remains from that period, a thirst for the links that once united man to his ancestors, to the forces of nature, to metaphysical powers. Through installations  often alignments of stones  he recreates symbolic networks of space occupation, generally after an on-site residence and a dialogue with the inhabitants. It is precisely what he has just done in an abandoned village in the Alpes-de-Haute-Provence region, Vière, where former lines of force leading either to the chapel or to the bread oven -, are materialized by blocs of limestone. When stone is reminiscent of man, we are touching the true archaeology of the future
 Richard Nonas is exhibited at the galerie Anne de Villepoix (43, rue de Montmorency, 75003 Paris) until 5 May 2012.

To know more about the installation at Vière, in the context of the Viapac transborder project.

Robert Longo, Men in the Cities

CLICK HERE to see all the openings in France, Belgium, Switzerland, Luxembourg

It is most refreshing when a young 92-year old man speaks up against those who make pompous predictions about the end of the profession and defends the freedom of contemporary art  In this dialogue published some ten years ago and updated, the artist the French most love (500 000 visitors during his exhibition at the Centre Pompidou in 2010-2011), obviously talks about his art, about his premature recognition by the USA (as of the 1940s), about the genesis of Outrenoirs in 1979, about the 104 glass roofs of the abbey of Conques and the invention by the engineers of Saint-Gobain of a glass to be found nowhere else,  which lets light go through but which the eye cannot see through . But he takes many roundabout ways to talk about rugby, about wine growing (he was a wine grower for a short time during the war), about Montaigne, certain models of Chinese paintbrushes or the golds of Cimabue. A beautiful lesson of open-mindedness and anti-sectarianism
 Pierre Soulages, Outrenoir, entretiens avec Françoise Jaunin, La Bibliothèque des Arts, 2012, 216 p., 15.