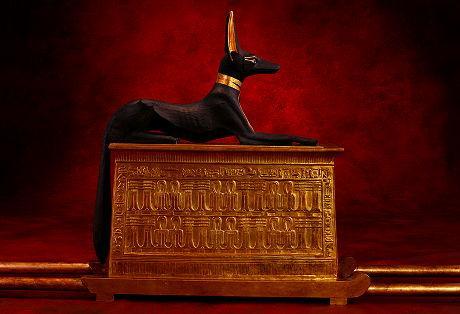 The secret of the Pharaohs

If you expect any great revelations, youre going to be disappointed. This title is misleading. It simply underlines the insane success of all and any exhibition on Egypt and its Pharaohs. As soon as Ramses or Tutankhamun show up attendance figures soar. Just like the press has its catchy titles such as real estate or the Free Masons, Egypt has the same virtues in the art world. A new level has been reached with the exhibition presented in Paris, at Porte de Versailles. Toutankhamon presents the tomb and treasures of the Pharaoh. Except that of course they are fake, completed molded from the originals, shining from its brand new gold paintWould Howard Carter turn in his own tomb? Not so sure. In our world where virtual reality occupies a increasingly growing place, why not step into the shoes of the archaeologist who discovered the tomb and its 5000 objects in 1922? We may not experience the same aesthetic emotion but on the other hand we become aware of the volume and the arrangement of the area, of the incredible piles of works of art. Virtual against virtual: after all, if this can replace an afternoon at the levers of Grand Theft Auto, its a good deal
 Toutankhamon at Paris Expo, from 12 May to 1er September 2012.

OTHER EXHIBITIONS ON ANCIENT EGYPT

The end of the Pharaohs...

PARIS  The musée Jacquemart-André is shedding light on le Crépuscule des pharaons, one last millennium which has long been considered as a period of decadence, by showing in particular the famous «green heads» (in photo, the one from Berlin). From 12 March to 23 July 2012.

NEW YORK  With the title The Dawn of Egyptian Art, the Metropolitan Museum of Art does just the contrary and seeks the origins of Egyptian art at the time of the first dynasties, starting with its own collection and those of 12 other great international museums (among them the Brooklyn museum, where this Bird Womanis from). From 10 April to 5 August 2012.

SEATTLE  Similar to the great tour in 1970, the exhibition Tutankhamun, the Golden King and the great Pharaohs, under the aegis of National Geographic, presents at the Pacific Science Center some one hundred objects (authentic, just like this statue of Amenhotep) from the kings tomb. From 24 May 2012 to 6 January 2013.

Egypt, at all costs

Contrary to what any neophyte could imagine, we can treat ourselves to a souvenir from the Egyptian Antiquity such as an ouchebti or a beetle in earthenware at very contained prices, starting at a few hundred Euros. One has to make sure though that the objects left Egypt legally, since Egypt has become (like other countries) very touchy about the looting of its cultural heritage. It is the case at Pescheteau-Badin, in Paris on 22 May, where we will see a pair of eyes in alabaster from the New Empire (estimate 300), an ouchebti covered in asphalt (400) or a sarcophagus plastered mask (1500). At Pierre Bergé, Drouot on 1st June, an extraordinary piece will attract one and all: a fine pleated linen tunic that has survived through 40 centuries in a remarkable state (250 000). At Sothebys in New York on 7 June, eyes and wallet will go from one end to the other with a statue-cube from the XXth dynasty (250 000 $) and a sculptors model of the god Bes (Ptolemaic period, 5000 $). Last but not least, on the following day Christies in New York will present beautiful pieces of which a votive painting on linen from the XVIIIth or XIXth dynasty (80 000 $).

 The auction at Pierre Bergé & Associés at Richelieu-Drouot, on 1 June 2012

Who has not had goose bumps when seeing the characteristic profile of the Concorde on the horizon? Photographer Frank Schramm (born in 1957) made it a reason for living. Next to his other works shown in various museums (in particular the series he did of journalists investigating at Ground Zero after the attack, recently shown at the musée de lElysée in Lausanne), he developed a passion for the famous plane and dedicated years of pilgrimages to it, following it at all airports, from 1989 up to its last flights. Whether taking off or landing, the supersonic is the only character in this black and white saga: more an icon than a machine
 Frank Schramm, Le Concorde Paris-NY at the galerie Esther Woerdehoff, from 23 May to 14 July 2012.

CLICK HERE to see the openings of the week in France, Belgium, Switzerland, Luxembourg - fewer than usual due to bank holidays.

Elisabeth and Hélène left to Japan in March 2003. Their travel notes stories about the luggage, planes, hotels, appointments they were late at  are hardly what we would call breathtaking. The rest is a lot more for the two women went on their great grand-fathers footsteps, painter Mathurin Méheut (1882-1958), who spent various months there in 1914. He left in April 1914, financed by Albert Kahn, the patron of arts who was busy creating his Archives de la planète. The ancestor first made a long stop over in Hawaï to draw the fish from the aquarium. Once he got to his destination, he sketched and drew all he could set his eyes on: landscapes, animals, temples and daily life, Nö theatre and cherry trees in blossom. At the end of August, when war was declared, he had to rush back home (after a month of sailing nevertheless) and experiences a true nightmare when he takes his place in the trenches in Arras on 17 October. He would never go back East but throughout his life he preserved the Japanese touch of his youth and a strong liking for natural sciences.
 Mathurin Méheut et le Japon, by Elisabeth, Hélène and Patrick Jude, éditions Ouest-France, 2012, 128 p., 20

EUROPE - The 8th edition of the European night of museums, including a variety of late openings and entertainment, wil be held in various countries of the European Union on 19 May 2012.

PHILADELPHIA - After many years of discussions in and out of the courts, the Barnes foundation wil open on 19 May 2012, right downtown, its new headquarters, designed by Todd Williams & Billie Tsien Architects.

XULTUN (Guatemala) - The most ancient known Maya calendar (and which does not mention the end of the world in 2012) has been discovered on the site of Xultun by a team from the university of Boston.

PARIS - The Adresse Musée de La Poste pays a tribute to the authors of the founding document Du Cubisme, two painters who remain today unfairly ill-known but were decisive in the spreading of the movement in France and abroad.