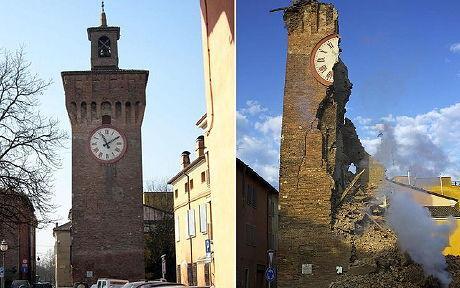 Finale Emilia, the bell-tower before and after the earthquake. © DR

When we think of the region of Emilia-Romagna what comes to mind is good food, joy of living, patrimony and culture, from Fellini to the antique university of Bologna, from tortellini to Ferrari cars. While we thought such tragedies were proper to the mountain areas in the Friuli, the Irpinia or the Abruzzi, the area was hit on Sunday 20 May at 4:03 AM by an earthquake of a magnitude of 6 on the Richter scale. While human loss was limited (7 deaths reported) in comparison to the one in Aquila in 2009, damage to the patrimony, still being evaluated, is major. These are the main ones:
 Finale Emilia: this little town of 15 000 residents, near the Panaro, between Modena and Ferrara, is the symbol of the disaster with its Torre dei Modenesi, which crumbled down in two phases. The cathedral and Rocca Estense also present serious damage.
 Poggio Renatico: in this small town of 6000 residents at the doors of Ferrara, that still bears the scars of the catastrophic flood of the Reno in 1951, the Lambertini castle lost its tower.
 Mirabello: the church of San Paolo has lost its apse.
 SantAgostino: known for its white truffle, the town saw its neoclassic town hall (1864) gutted out. It will most probably have to be demolished.
 San Felice sul Panaro: serious damages at Rocca Estense
 Ferrara: decorative elements from various palaces from the town centre and from Castello Estense have been destroyed.

See a slide show of a few monuments hit, on the website of Resto del Carlino, the daily newspaper from Bologna

See a very complete press review on the Patrimoniosos.it website.

METZ  What can be created when we are deep into the crisis? That is the underlying question put forward by the exhibition at the Centre Pompidou Metz. Of course it refers to the terrible year if 1917, the one of the killings on the Chemin des Dames, the second battle of Flandres, the Russian Revolution. But of course this message can be moved, with the necessary precautions, to all periods of regression. The maybe unexpected teachings, as seen in the examples given of Picasso (the theater curtain of Parade), Brancusi (Madame X) or of Duchamp (Fontaine), is that the production, far from withering, on the contrary flourishes with the arrival of amateurs eager to leave their own testimony next to that of renowned artists (for example the paintings in the trenches). We then see two strategies that seem to sum up human character: on the one hand, those who go up to the front (like Otto Dix), and on the other hand, those who like De Chirico or Matisse practiced a strategy of avoiding, preferring to recreate an ideal world far from the sound and the fury.
 1917 at Centre Pompidou Metz, from 26 May to 24 November 2012.

Kirchner at the top

 MADRID - The Mapfre foundation offers a real blockbuster on Ernst Ludwig Kirchner (1880-1938), one of the leaders of Expressionism: over 150 works from some thirty museums around the world (ill. Bathers on the beach, 1913, Staatliche Museen zu Berlin, Nationalgalerie © Jörg P. Anders). From 26 May to 2 September 2012.

 PARIS  In the midst of the media deluge that surrounds Walter Salless movie, On the Road, the musée des Lettres et Manuscrits has had the good idea of presenting Kerouacs original manuscript, the famous roll in the shape of the Torah. From 16 May to 19 August 2012.

 ZURICH  Though almost unknown to the general public, Adrian Zingg (1734-1816) was one of the forerunners of Romanticism and a tireless sketcher of the landscapes around the valley of the Elbe. The Kunsthaus dedicates a wide retrospective ((ill. Waterfall, 1785, Dresde, Kupferstichkabinett). From 25 May to 12 August 2012

Caricatures of the past

Everywhere we turn we have politics and economy. Not a day goes by without its share of surveys or elections (the presidential in France, then in Serbia, municipal elections in Great-Britain and in Italy, the Obama-Romney dual getting closer). And macro-economic data is lavished on us as well. Our ancestors who had neither television nor radio had an equally important rapport to politics, but it was channeled almost exclusively through the printed press. This gave a multitude of illustrators the pleasure of interpreting the character, the faults and the blunders made by the bourgeois, men of finance and other leaders. The Baille auction gives us a very accessible glimpse of the iconoclasm of Gabriel Lion, Maurice Radiguet and Louis Forton  known for his Pieds nickelés(or otherwise the Bachibouzouk Band) - between 1880 and 1920, as no lot is estimated for more than 400! Not to be missed as well, another auction to come up in the same auction house on 2 June, dedicated to the illustrator Tetsu (1913-2008), who worked in particular for Jours de France and Figaro Magazine.
 Dessins de presse 1880-1920 at Richelieu-Drouot (Cabinet VAEP Robert-Baille) 31 May 2012.

Sean Scully, a tribute to Greece

Most enlightened Europeans no longer see Greece today as anything else than the symbol of bankruptcy  Obviously, in the midst of this contemporary art is going through its own purgatory. It is in this difficult situation that artist Sean Scully (born in 1945 in Dublin) has chosen rather courageously, to pay a tribute to the somewhat forgotten gift Greece gave to Europe some time back: democracy. For him it is embodied in the Doric order, contemporary to Pericles. This is where the apostle of geometry, of stripes and checkers found his inspiration to produce his own series Doric, which symbolizes two virtues that could seem antithetical: order and humanism. After being exposed at the Benaki museum, these large compositions (over 4 meters wide) will head West to be shown at the IVAM in Valencia and at the Hugh Lane Gallery in Dublin.
 Sean Scully, Doric at the Benaki museum, from 9 May to 15 July 2012.

Recently we witnessed something similar with Proust, that is, the reconstitution of his ideal museum, based on quotes from his Recherche. In the case of Balzac, the work was just as out of proportion since it was necessary to pick throughout the Comédie humaine, from la Rabouilleuse to la Peau de chagrin, from la Cousine Bette to Cousin Pons. We owe this to the curator of the Balzac museum, whose investigation has unveiled Hippocrate refusant les présents dArtaxerxès (from Girodet-Trison, quoted in Illusions perdues), a Madone by Piola the elder, today at the Fesch museum in Ajaccio (mentioned in Le Cabinet des antiques) up to an obscure Frans Mieris hidden at the Gemäldegalerie in Dresden (mentioned in Beatrix. This treasure hunt of sorts started from the introduction with mention of the interiors of the writers home (what furniture, engravings, rugs did he possess at home?), and ends in the last chapters dedicated to his correspondence and to the portraits of Balzac by his contemporaries: the examiner becomes the examined
 Le musée imaginaire de Balzac by Yves Gagneux, Beaux Arts éditions, 2012, 288 p., 34 

BUCHAREST  The Biennale of contemporary art in Bucharest will open on 24 May 2012 and will be held until 22 July.

CHAUMONT  The 23rd international festival of posters and graphism will be held from 26 May to 10 June 2012.

LONDON  The Biennale Lux/ICA, dedicated to animated images (video in the first place), will be held at the Institute of Contemporary Art, from 24 to 27 May 2012.

MADRID  The International Encounters Paris/Berlin/Madrid, focused on new cinema and contemporary art, will be held from 23 to 26 May 2012.

PARIS  Aurélie Filipetti (born in 1973), deputy from the Moselle department, has been named minister of Culture in the new government led by Jean-Marc Ayrault.

VIENNA  The new rooms at the Thyssen-Bornemisza Art Contemporary, TBA21, will be inaugurated on 28 May 2012.

NOYON  During the celebration of the tri-centennial of the birth of Jean-Jacques Rousseau, the musée Jean Calvin sheds light on different aspects of the link between the philosopher of the Enlightenment and the great Reformer of the Renaissance.