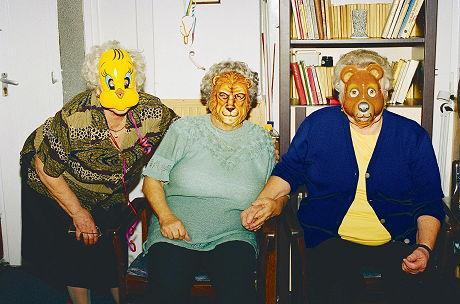 Photo in Europe: 10 exhibitions not to be missed

As the weather improves, the major photography season opens all over Europe. Following in step with the Rencontres dArles, launched in 1969, festivals and exhibitions have learned to multiply throughout the continent during the summer. Will the Photo España festival put smiles back on the people in a country as strongly impacted by the crisis as Spain is? Can its main competitor satellite, Madrid Foto, survive over the long term? Thissort of questiondoe snot come to mind when we consider the very young London Festival of Photography (2nd edition), which will of course profit from the impetus given by the Olympic games. And why not skip over to lesser known latitudes such as Photo Tbilissi for example, which opens on themes that become exotic with the distance? Besnyö, Pieter Hugo or the Polaroid collection are some of the many temptations presented during this summer full of exciting set images

DUSSELDORF - The Collection Polaroid at the NRW-Forum, from 26 May to 5 August 2012.

LAUSANNE -Pieter Hugo and Roger Ballen at the musée de l'Elysée, from 18 June to 2 September 2012.

LONDON - The London Festival of Photography, during the month of June 2012.

Photographer unknown, Tatline with his assistant in front of the model for the monument for the 3rd Internationale, Petrograd 1920

BASEL  Vladimir Tatlin (1885-1953) symbolized on his own the constructivist movement. He is known in particular for his revolutionnary tower, at the crossroads "of architecture, sculpture and painting" according to art critic Nicolas Pounine. But the tower was never built (it was supposed to be 400 metres tall). As there is no original to show, the exhibition presents models made recently but goes much further to initiate us to the unknown aspects of Tatline's art, he the avant gard artist as early as 1914. We can also discover this former sailor's "angle counter reliefs", paintings from his early years (directly in the tradition of icons) as well as the flying Letatlin vehicle.
 Tatline, un nouvel art pour un monde nouveau at the musée Tinguely, from 6 June to 1er October 2012

BORDEAUX  The CAPC presents Michel Majerus, a Luxembourgeois artist who died too soon (in 2002 in a plane accident), and in particular with one of his major works, the huge skateboard ramp If you are dead, so it is. From 31 May to 23 September 2012.

LONDON - The Victoria & Albert museum offers to show us 150 objects taken from the Pandora box of one of the most inventive design studios in the English scene. How else could we describe Heatherwick Studio: Designing the Extraordinary? From 31 May to 30 September 2012.

Delvoye is enthroned at the Louvre

PARIS  After François Morellet and Tony Cragg, the Louvre museum asked Wim Delvoye to intervene in the midst of its permanent collections. The Belgian artist set up a "Gothic" spire in Corten steel. From 31 May to 17 September 2012.

Jakowsky, between Surrealism and art naif

PARIS - Anatole Jakowsky (1907-1983) registered the atmospheres that are bound to disappear, was a cosmopolite born in Bessarabie and died in Paris, witnessed the great era of Montparnasse and was also the soul of the Musée international dart naïf in Nice. His collection, which today is scattered, shows the variety of tastes of this pioneer who has not yet being followed in all of his intuitions While Bellmer or Picabia are mandatory for collectors (present here through pages or works), just like the totems that belonged to Pierre Bettencourt (estimated circa 7000), there are discoveries to be made, at prices ten times inferior, towards Jan Krizek, James Pichette or Aude Jessemin.
 Collection Anatole Jakowsky, at Richelieu-Drouot (AuctionArt Le Fur) on 1 June 2012

PARIS  They became famous for their portrait of a metropolis in decomposition, Detroit, whose walls crumbled to the ground just like the morale of its residents. Romain Meffre and Yves Marchand have being working together for years. They are back, with a series dedicated to American decrepit cinemas, heroic architectures from the Roaring Twenties transformed into parking lots, basketball courts or supermarkets. Their resilience at work, the systematic aspect in the form of an inventory (which irresistibly reminds us of the Becher couple) and their demand for quality in the larger chamber compositions allow us to imagine the work of these two old veterans. Marchand and Meffre are only 31 and 25 years old and we await impatiently their next productions on the scars of heavy European industry.
 Yves Marchand & Romain Meffre, Theaters, from 26 May to 4 August 2012 at Polka Galerie.

Paris in the sixties

It is said from the beginning. This book is a subjective approach of art in the 60s in one of the major scenes of the time, Paris. We see Carl Andre, with his thick beard at the home of young Yvon Lambert, as well as the mysterious André Cadere with his colored sticks; Jean Dubuffet or the meteorite Bernard Réquichot, who committed suicide at the beginning of the decade, in 1961. These are not biographies or critical analysis in the form of traditional history of art, but rather very personal summaries in which the circumstances, the friendships and archives of the author  a critic and an exhibition curator-, play a central role. Consequently we have a drink at La Palette with Topor and Pol Bury, we relive the famous Journée dans la rue of the GRAV, on 19 April 1966 or the infamous happening Dechirex by Jean-Jacques Lebel, in May 1965, with a nude woman arriving on a motorcycle and female croquet players hitting the crowd with their rackets. The power to bring those moments back to life also lies in the images of the photographers of the time, and first of all André Morain, who is still active today. We should not read this book full of life and fury like an academic pensum, but rather as palpitating memoires
 L'art des années 1960. Chroniques dune scène parisienne, by Anne Tronche, Hazan, 2012, 512 p., 49

FONTAINEBLEAU  The 2nd festival of history of art will be held at the castle from 1 to 3 June 2012.

FRANCE  The "Rendez-vous au jardin" event has a program of visits and entertainment in more than 2200 gardens in France from 1 to 3 June 2012.

GENK (Belgium) -The Manifesta 9 contemporary art biennale will be held from 2 June to 30 September 2012.

PARIS  The Art Saint-Germain-des-Prés fair will be held in the neighborhood galleries, from 31 May to 3 June 2012.