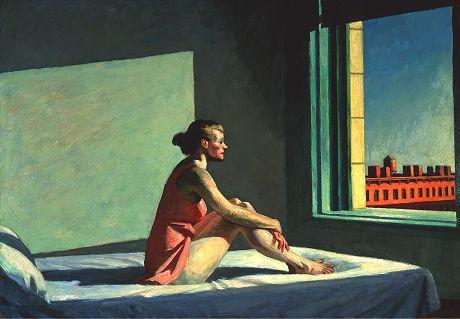 MADRID  The exhibition five years ago at the Museum of Fine Arts in Boston had made us green with envy. Indeed, some one hundred works by the champion of American realism were exhibited, and such a show could only further enhance the unbearable absence of this artist in Europe (though he had made a fundamental trip to Paris in 1907, the year of Demoiselles dAvignon) But justice has been made: the major long awaited retrospective will finally open at the Thyssen-Bornemisza in Madrid before coming later this year to the National Museum of Modern Art in Paris. Edward Hopper (1882-1967) is known today as the major interpreter of the American way of life  the city, the crowd, the solitude, the bar, the gaz pump  but he suffered to get there having sold his first painting at the age of 31 and the second one only ten years later! The rest of his career he was bestowed all the honors he deserved. The exhibit presents 70 works, spanning all his periods, from 1900 to the end of his life, and ends with a movie tribute. Ed Lachman has recreated on a set the famous Morning sun, in which a woman lets the mornings first sunrays slip through her window.
 Hopper at the Thyssen-Bornemisza museum, from 12 June to 16 September 2012, at the Centre Pompidou from 10 October 2012 to 28 January 2013.

LAUSANNE - Aloïse Corbaz (1886-1964) is already present in various international museums, among them at the LAM in Villeneuve-dAscq. Today she finally benefits from a well-deserved retrospective on her own soil. Two institutions, the Musée cantonal des beaux-arts and the Collection de lart brut, have associated to offer a complete exhibition in two parts to this artist Dubuffet so appreciated. Aloïse was a seamstress and then a governess in Potsdam, before being committed to an institutuon for schizophrenia in 1918, at the age of 32. For forty years she created works that are both unclassifiable and colorful, in the most unbelivable formats, placing her among the highest representatives of art brut. This event coincides with her catalogue raisonnéee being put on line.
 Aloïse, le ricochet solaire at the Musée cantonal (from 2 June to 28 October 2012) and the Collection de lart brut (from 2 June to 26 August 2012).

LILLE  The image we have engraved in our minds is the one Brueghel the Elder gave it in the XVIth century. What did the Tower of Babel actually look like? This symbol of a missed globalization  workers eager to reach the skies abandon their work, incapable as they were to overcome the cacophony of their respective languages  is more present than ever in todays world. This explains the excited creativity of contemporary artists as can be seen in the selection presented. There are stimulating versions such as the 15 000 books placed in a spiral by Jakob Gautel, or depressing ones like the nightmarish movements of human larvae in No Woman No Cry by the Chapman brothers. There are also comic books (Schuiten), videos, photographs (Rauzier), sculpture, painting (Kiefer) and even in bee wax as John Isaacs. For those who believe ancient myths are has-been, this exhibition shows us their incredible capacity to renew themselves.
 Babel at Palais des beaux-arts, from 8 June 2012 to 14 January 2013.

BORDEAUX -The exhibition decrees he is the poet of Cubism. Tobeen (1880-1938), a native from Bordeaux and friend of Lhote and Gleizes, is more the forgotten member of the artistic movement. The musée des Beaux-Arts pulls him out of this anonymous state by presenting various works on loan, in particular from Dutch collections (Ill. : Les Pelotaris). From 8 June to 16 September 2012.

Rodin face to face with marble

PARIS -At the musée Rodin, the rooms of which are closed for renovation, Rodin, la chair et le marbre shows how the artist whom we erroneously considered traditional in his marble sculptures, on the contrary submitted the noble material to a treatment as audacious as the one plaster received (Ill. : The Kiss© Musée Rodin, Photo Christian Baraja). From 8 June 2012 to 3 March 2013.

Kalvach, between Klimt and Kokoschka

VIENNA -The Leopold Museum celebrates another unknown artist, Rudolf Kalvach (1883-1932), a nearly contemporary to Tobeen. The Jugenstil tendencies, very powerful in Vienna in 1900, dominated his work and gave birth to a striking decorative work (Ill. : Docks, the life of the Trieste port, private coll.). From 7 June to 10 September 2012.

The eye of René Clément

CHEVERNY - The garden-party auctions at the Rouillac house, led by Philippe and his son Aymeric, are followed with interest. That is because they are held in an unexpected venue - the castle of Cheverny that inspired the Moulinsart of capitaine Haddock in the well-known Tintin comic series and also because they always unveil some surprises. In this edition, among the 459 lots among which a Auto-portrait -Self portrait - by Alma Mahler (estimate: 2000) and a small gouache by Herbin (1000), we will discover in particular a charming painting by Pissarro, Julie allaitant Ludovic-Rodolphe (Julie nursing Ludovic-Rodolphe) (250 000), ignored for over half a century. There is also the collection of René Clément, the director of La Bataille du rail and Jeux interdits. Some fifteen paintings by Buffet, Dufy, Bauchant and the most beautiful is a portrait of dancer Madeleine Grey by Van Dongen (300 000). This is a good opportunity to mention what led him to collect works of art. When he was declared the best movie director during the first Cannes festival in 1946, the prize also included a masters painting to be chosen among a small selection. He chose one by Marquet. This original initiative is worthy of being renewed
 XXIVe Vente garden-party at the château de Cheverny (étude Rouillac), on 10 June 2012.

Yüksel Arslan -born in 1933 - a friend of Topor, Sarkis and Dado, has been living in Paris for the last fifty years, where André Breton invited him for the first time in 1959 for the 8th Exposition inteRnatiOnale du Surréalisme (International Exhibition of Surrealism), dedicated to Eros at the galerie Cordier. He was not able to attend as he was not granted a visa to leave Turkey. It took an important retrospective in Istanbul in 2009, followed by monographic exhibitions at the Kunsthalle in Zurich then in Düsseldorf, to note that this unequalled creator, greatly ignored by his host country, continues to produce in his calm apartment in Saint-Mandé. He kneads literary, religious and historic sources as he is an avid reader, grinds his pigments himself and adds various poor substances such as soil, hair, body fluids to produce Artures he records diligently in a little note book. These are true visual encyclopaedia of our civilization, of our failings and of our fears. And they brim with details, characters, animals, objects and texts, allow for various interpretations and invite us to dive into a fascinating universe.
 To be read: Yüksel Arslan, Artures, catalogue des expositions aux Kunsthalle de Zurich et Düsseldorf, directed by Oliver Zybok, German/English, Hatje Cantz, 2012, 272 p., 39.80

The champion of trompe-l'il, who creates with diamond, chocolate, caviar, shows his most recent works

CLICK HERE to see the openings of the week in France, Belgium and Switzerland

Some places still exist, like the Deux Magots, the Closerie de Lilas or the Studio des Ursulines (in 1929, Buñuel filled his pockets with a stock of pebbles to throw on the public if they did not like his movie Un chien andalou). Other venues have disappeared, such as the apartment at 54, rue du Château in the XIVth arrondissement, where Marcel Duhamel, Desnos and Prévert used to meet, or Studio 28, where the LAge dor was first projected. Together they draw up the ideal geography of a Surrealist Paris between the two wars. This Vademecum, which unfortunately lacks a street index, does not pretend to be a dictionary but rather a selection of strolls focused on the major names of the movement. We thus follow Aragon along the covered passages on the right bank, Crevel all the way to the cemetery of Montrouge where he is buried, Soupault along the quais of the Seine, Breton between the rue Fontaine and the hotel des Grands-Hommes. A way of lifting ones eyes and placing the avant-gardes in the topography.
 Guide du Paris surréaliste directed by Henri Béhar, éditions du Patrimoine, 2012, 200 p., 25.

BASEL  Liste 17, the contemporary art fair dedicated to young artists and galleries, will be held from 12 to 17 June 2012.

KASSEL  Documenta 13, the contemporary art event that takes place every five years (first edition in 1955), will be held from 9 June to 16 September 2012.

MARIEHAMN (Aland islands, Finland)  Artcurial will put up for auction on 8 June 2012 ten very special champagne bottles (Veuve Cliquot Ponsardin, Heidsieck, Juglar): they were discovered in 2010 48 metres underground, are 200 years old and are each estimated at 10 000.

MONTPELLIER  The festival of Architectures vives, dedicated to ephemeral architectural creation, will be held from 13 to 17 June 2012.