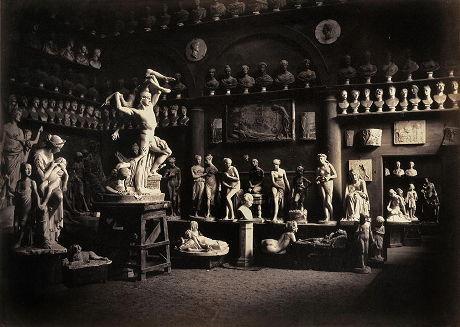 Arles looks back on its past

The forerunner of all photography festivals, the Rencontres Internationales have decided to « pause » and make an assessment of the profession, thirty years after the opening of the ENSP (National Higher School of Photography, one of President Mitterands major projects. What has happened to the graduates of this pioneer institution? How do they see the world? Why are they not famous or rated like their colleagues from Düsseldorf and Yale? From A like Grégoire Alexandre  graduated in 1995  to V like Aurore Valade  graduated in 2005 -, they are 25 to hold monographic exhibitions. All other exhibitions  whether it is the Alinari funds, the collections of the Société française de photographie (French Photography Society), Koudelka or the editorial adventure of Contrejour  all follow the same guiding thread. That is, the curators or the photographers have all gone through the ENSP or in some way represent a certain French school which fortunately has some cosmopolitan blood in its veins
 Rencontres dArles from 2 July to 23 September 2012

ATTENTION! LAST DAYS! UNTIL 2 JULY.Do not miss. SOME DAY I WILL BUY A MUMMY - Émile Guimet and Ancient Egypt; the passion of an unusual and visionnary collector through 350 objets at the MUSEE DES BEAUX ARTS DE LYON. Read the article in L'Art Aujourd'hui

MONTPELLIER - TOULOUSE  He never wanted students but four centuries after his death his posterity continues to be material for an unlimited number of exhibitions. Caravaggios adventurous life has no doubt contributed to his current reputation of a cursed painter but is true donation lies in the naturalist revolution he stamped on European painting. Through the FRAME, that brings together 26 major museums in Europe and in the USA, this retrospective of 140 works of art is divided in two parts, the Caravaggio-style on the South at Montpellier and the Northern Caravaggio in Toulouse, where Nicolas Tournier was active. This is an exceptional gathering to which the Master himself has been invited, with the Sacrifice dIsaac brought from the Uffizi. Others are also present, such as Valentin, Georges de La Tour and the virtuosi of the school of Utrecht (Honthorst, Ter Brugghen).
 Corps et ombres, Caravage et le caravagisme européen (Body and shadow. Caravaggio and European Caravaggism) at the musée Fabre (Montpellier) and at the musée des Augustins (Toulouse), from 23 June to 14 October 2012.

Murillo and his patron

MADRID  In a Murillo and Justino de Neve, the Prado museum shows the special link between the painter and his patron, the chapelan at the cathedral of Sevilla, with 17 paintings from international collections (Houston, Edimburg, Budapest, Paris, etc.) From 26June to 30 September 2012

After Helmut, it's Alice's turn

PARIS  After Helmut Newton at the Grand Palais, it is the turn of his wife Alice Springs to be celebrated at the Maison européenne de la photographie, next to Charlotte Rampling, Paul Thorel, Anderson & Low and Jérémie Nassif. From 27 June to 26 August 2012.

The memory of sports

PARIS  With the way the French football team has disappointed its supporters, this may be the moment to plunge into a more radiant past. And this auction allows us to do just that, with an accumulation of souvenirs that go back a whole century. Enthusiastic reviews, such as Miroir Sprint, Life in the great outdoors, Club, knowledgeable manuals on Brittany style wrestling or body building (with a Traité de gymnastique élémentaire (Treaty on elementary gymnastics) from 1819 and unexpected trophies such as the blue swimsuit Nicole Montandon wore in the 200 meters at the Olympic games in 1968 or the leather suitcase of Vitorio Diaz, a player in the Argentine football team during the Olympics in 1928. And where is art in all of this? It is present with the famous bronze by Alfred Boucher, Au but, and with countless statuettes of tennismen in plaster, chrome metal, in porcelain and other material: sports for everyone
 Sur le thème du sport at hôtel-Drouot on 30 June 2012 (Coutau-Bégarie).

Antoine d'Agata and the dark side of the world

Its not aesthetic, he explained in English, regarding his photographs during a conference at the BAL in Paris, in 2010, and he added that he was generally an actor as well as a witness in his shots. The crudeness of the latter led one of his exhibitions at the musée Niépce in Châlon-sur-Saône to be partially forbidden last year to minors. Antoine dAgata (born in 1961) experiences sex, drugs, illness, suffering and death very closely and the spectator has the impression of a journey into hell willingly made, like when he shares the daily life of a Cambodian prostitute affected by AIDS, in Ice, his last work. This way of observing the dark side of the world, often rendered in a fuzzy darkness one could believe to be symbolic, this empathy with the downcast and the weak have led the photographer, a member of Magnum, to be a permanent wanderer and to have an unusual commitment: he is one of the only known photographers to be homeless. He wrote in Ice on 19 December 2007: The only way out is for me to strip myself of photography and to go deeper into the night.  To read: Ice, Images en Manuvres éditions, 2012, 290 p., 45.  To see: Antoine dAgata at the Fotomuseum La Haye, from 29 May to 2 December 2012.

Nature is the theme of my life frequently says the artist who exhibits photographs, drawings and paintings.

CLICK HERE to see the openings in France, Belgium, Switzerland

The invasion of heritage

We have surely come a long way since Mérimée and the beginnings of the heritage protection! Today over 40 000 buildings are protected in France. Recent campaigns have integrated into this perimeter certain parts that were long looked down upon, such as industrial architecture. The author of this book wonders how we can face this inflation of the patrimony, and he knows what he is talking about since he directed the Inventaire général du patrimoine (General Inventory of patrimony) founded by Malraux, from 1996 to 2003. He underlines the apparent absurdities of our collective memory, when we note the Parisians are the ones who have lobbied for the Tarasque procession to be registered in the national heritage while the young population of the Tarascon region, of Arab origin, could not care less, or the traps set by history where the Eiffel Tower was considered useless and monstrous by its contemporaries and it has now become a sacred monument. He also shows how the extension of the notion of patrimony has allowed welcoming elements from the cathedral to the little spoon. This unacceptable exaggeration will one day inevitably call for a dose of iconoclasm
 Mirabilia. Essai sur lInventaire général du patrimoine culturel by Michel Melot, Gallimard, 2012, 304 p., 22.

BERLIN  The 4th edition of Berlin-Paris, an exchange of galleries, that presents some sixty artists, will be held on 29 and 30 June 2012 in Berlin, then on 6 and 7 July in Paris.

LONDON  The 2nd edition of the Masterpiece ancient art fair will be held from 28 June to 4 July 2012 at the Royal Hospital de Chelsea.

VERSAILLES  The château de Versailles has announced that Swiss foundation Philantropia will finance the restoration of the Latona fountain, designed by André Le Nôtre.