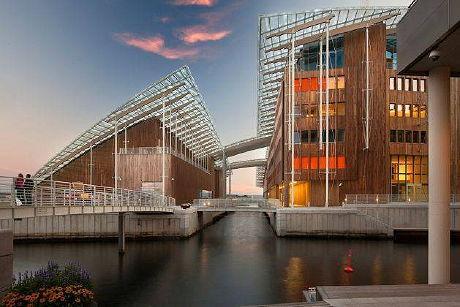 Renzo Piano on a fjord

OSLO  Architect lovers in the Norwegian capital were used to heading east to contemplate the Opera designed by Snöhetta. While waiting for the museum dedicated to Munch that seems to be getting wrapped up in polemics, people will start going west now, towards the district of Tjuvholmen. Indeed, that is where the new Astrup Fearnley museum has been set up. The museum is financed by a major Norwegian dynasty of ship-owners, active since 1869, and was commissioned to the master of large collections, Renzo Piano. Starting with the Centre Pompidou, he also designed the Mesnil Collection in Houston, the Art Institute in Chicago, and the Fondation Beyeler in Basle, among others. This new shop window plays with the natural environment - water and light  for obvious symbolic reasons: it is at this precise place that the town blends into the fjord. Consequently there is a game of zenithal light, of reflections and bridges to go from one to the other among the three buildings. The opening exhibition is a summary of thirty years of contemporary art purchases, including famous artists such as Jeff Koons, Cindy Sherman or Damien Hirst.
 The Astrup Fearnley Museum opens on 29 September 2012.

The older years of Degas

BASLE  In 1886, Edgar Degas was 52 years old. His Impressionist period was behind him. Needless to say that although he continued to paint and did for another 31 years- the press was a lot less interested in him. To prove this, the Garzanti art Encyclopedia does not mention a single work of this period in the chapter it dedicates to him! The Fondation Beyeler rights the wrong and shows how the older Degas is just as interesting as the younger one. He explored in depth the themes endlessly looked at earlier (the nudes, horse jockeys, dancers), by being more direct, with more architected compositions, more saturated in color. Two pastels belonging to the foundation (Le Bain and Trois Danseuses) give the rhythm to this retrospective that brings together some 150 works of art on loan from the world over.
 Degas at the Fondation Beyeler, from 30 September 2012 to 27 January 2013.

PARIS  Just when we think we have looked at Impressionism from all angles, there is always a new dimension left to be discovered It is the turn of the exhibition at the musée dOrsay as it draws a bridge between Monet, Renoir or James Tissot and the fashion of the times. A large painting by Caillebotte, shipped over directly from Chicago, shows the bourgeois of the Second Empire on the wet pavement of the large boulevards, but we also discover a great number of small genre studies. And there is fashion for real Hats, blouses, petticoats and shoes have been lent by the musée Galliera or other institutions to help our eyes travel from the model to its interpretation. Old photographs and excerpts from Zolas Bonheur des dames complete the immersion into the refined universes of fashion designer Worth, of Deffosse the hair dresser and wig maker or of the perfume specialist Houbigant
 Limpressionnisme et la mode at the musée dOrsay, from 25 September 2012 to 20 January 2013.

LONDON  Who will be the winner of the Turner Prize, the main contemporary art prize in Great-Britain? The answer will only be known in December but the four selected artists are already exhibited at the Tate Britain. From 2 October 2012 to 6 January 2013.

MADRID  In Encuentros con los años 30 (Encounter with the thirties), the Reina Sofía museum shows us how the artists between the two wars were condemned to create in an increasingly violent environment. From 3 October 2012 to 7 January 2013.

The paths of the bohemian life

PARIS  Robert Carsen staged the exhibition at the musée dOrsay mentioned earlier, as well as this Bohèmes in which the Grand Palais examines the myth of the accursed, vagabond artist, who lives on his wit and love, the symbol of creative freedom. From 26 September 2012 to 14 January 2013.

Jean-Luc Parant, the man who made balls

He is known for his love of balls. Not the ones you kick around a field nor bounce around a gymnasium, but rather the obsessive creation of spheres in earth and papier-mâché. In a given town in Southern France, Parent created a ball per resident. But we cannot limit this artist, a poet as well, to this rolling production. He also has a passion for books - makes book cases in wood and wax  and for natural history. As in palimpsests, he loves to cover old herbaria, old aged letters, or old pearly shells with his own writings that turn into endless, beautifully written sentences.
 Jean-Luc Parant is presented at the galerie Lara Vincy, until 28 October 2012.

Jacques-Emile Blanche (1861-1942) is one of those artists we do not know where to classify. He was a bit Impressionist, a bit memorialist (specializing in portraits), a bit intellectual, a bit mundane, somewhat of a writer, somewhat of a pianist. But he was more than a bit: he actually was brilliant in all of these fields and leaves us the image of a dabbler, a talented dilettante, a category which art history often casts into oblivion. A friend of Prousts and of Robert de Montesquiou, he saw up close the decadent atmosphere of the end of the XIXth century, the Belle Epoque that reeked of boredom. Between Blanchard, Maria and Blaue Reiter, the earlier mentioned Garzanti encyclopedia forgot Blanche This proves he was known in his time, as even Mauriac thanked him for opening his eyes to painting, but he disappeared after that. This well-illustrated biography does justice and it is read like a real Human Comedy in which we see Aubrey Beardsley, Oscar Wilde, Gide and Joyce and the superb Ida Rubinstein and Tamara Karsavina.
 Jacques-Emile Blanche by Jane Roberts, Gourcuff Gradenigo publishing house, 2012, 216 p., 39

Our selection in France, Belgium and Switzerland